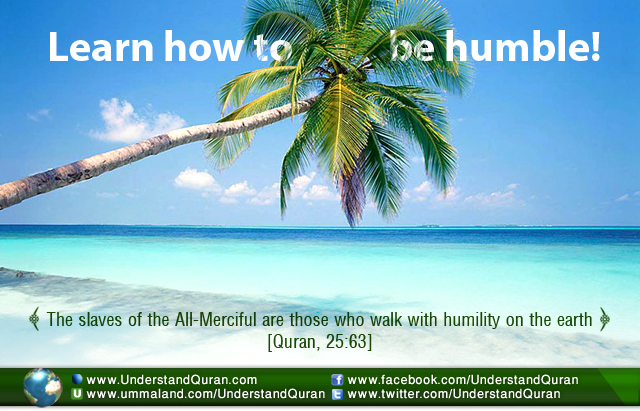 Can you imagine your name being mentioned next to the name of Allah ‘azza wa jall?
It’s time to meet the slaves of the All-Merciful and find out how you can strive to be of the elite human beings raised in status in this world and the next, inshaa’Allah— by being humble!

Allah Ar-Rahmaan says in this week’s central ayah: The slaves of the All-Merciful are those who walk with humility on the earth . . . [Quran, 25:63]

The benefits of being a slave of Allah

The characteristics of ibaadur-rahmaan, the slaves of the All-Merciful, are mentioned by Allah Himself in the last ayaat of Surah Al-Furqaan. We often give a negative connotation to the word slave, however it only takes the right knowledge to realize that being a slave can be the most honourable position. Realize that we are all slaves; it is our choice if we become slaves to our nafs (by following our desires) or slaves to Ar-Rahmaan.

How many times do we fear losing our provisions, death, humiliation, reputation, and respect? If you truly become a slave of Ar-Rahmaan you will be freed from these fears and you will realize that everything in this world is temporary and in the hands of Allah alone. The only thing you will fear is Allah being displeased with you!

6 ways to live by this ayah

1.      Know that Allah loves humility.
Some people see humility as a weakness. First realize that Allah Himself loves to see you humble and He will reward you for it. The Prophet salallahu ‘alayhi wa sallam said: . . . whoever humbles himself before Allah subhanahu wa ta’ala, Allah will raise his degree. [Muslim]

2.      Keep reminding yourself to be humble.
Do you consider yourself humble? We live in a time of boasting and competition in material things, and we have become proud of our money, knowledge, and even the number of children we have. Another common example is parents boasting about their children, e.g., “My son is at this  level.” The problem lies here: we should not be proud of our achievements or belongings, rather we should be grateful for them! Try to really remind yourself throughout the day to be humble and not to boast about anything. Don’t compete in the amount of clothes or bags you have; compete in good deeds!

3.      Follow the examples of the Prophets.
How many people start feeling proud and even above others when they reach a high position in their career, or even when they start gaining Islamic knowledge? Look at the prophets; they knew that prophethood was not something to boast about— they saw it as an honour, and they were humble before Allah. The Prophet Muhammad was the most humble of men.

What are examples we can copy? Serve yourself regularly (even though there are those willing to serve you), and share your car with someone when you drive somewhere (the prophet would ride on a donkey and would have someone ride behind him on it). Sit with people and accept the invitation of people who are less “rich” or “fashionable” than you consider yourself to be. Some people do not want to be seen with “poor” or “lower class” people because they are scared it will harm their reputation.

5.       Know that pride can kill.
The hereafter is only for those who are humble, and this should be a massive eye-opener. Qarun was proud of his wealth and Allah had the earth swallow him up, Fir’awn was proud of his power and Allah drowned Him. The Prophet taught us that people with even a tiny bit of pride will not enter Paradise. So let’s start begging Allah now to protect us from pride, to forgive us for it, and to increase our humility!

A person ate in the presence of the Prophet with his left hand, whereupon he said: Eat with your right hand. He said: I cannot do that, whereupon the Prophet said: May you not be able to do that. It was vanity that prevented him from doing it, and he could not raise it (the right hand) up to his mouth. (i.e. his hand became paralyzed). [Muslim]

6.         Know Allah’s perfection.
One practical way to increase your humility is to study about Allah and how we are fully dependant on Him. Another way is to come to know ourselves, where we come from, and all our weaknesses and short comings.  A way to be even more humble is to constantly seek Allah’s forgiveness. Increase in saying astaghfirullah– I seek Your forgiveness and really feel that you are sorry.

To get to know Allah and how to live by His names, read here.
Check out this related name:  Al-Kabeer.

7.         Fight arrogance.
The opposite of being a servant to Ar-Rahmaan is arrogance, or kibr. Allah says: . . . Indeed, He does not like the arrogant. [Quran, 16:23] You can be arrogant towards other people by looking down on them, but also in how you deal with Allah’s commands. For example when you think, I’m too busy to read Quran. Ask Allah sincerely to protect you from kibr in all its forms and increase in saying Allahu akbar, truly realizing He is greater than anything or anyone.

May Ar-Rahmaan bless us with humility and protect us from pride and arrogance, ameen!