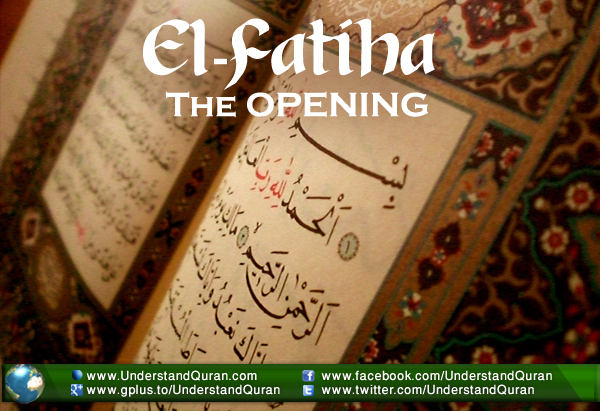 Why is Surah al-Fatihah so precise yet such an important surah? Al-Fatihah is a prayer, a dialogue between the abd (slave) and his Rabb, the Creator of everything.

Surah al-Fatihah, known in Arabic as as-sab al-mathani, i.e. “the seven repeatedly recited ayaat” is a short yet comprehensive surah. In its seven ayaat it encompasses all the themes of the Quran. The prayer remains incomplete if this Surah is not recited in the Salah.

The Surah opens up with basmalah, the saying that must be recited before beginning any work. By reciting the words BismiAllahi rrahmani rraheem, a Muslim seeks the blessings of the Most Gracious— “Ar-Rahman”— and the Most Merciful— “Ar-Raheem”, Allah subhanahu wa ta’ala.

This is a sunnah that our beloved Prophet sallAllahu aalyhi wa sallam taught us. In the Quran in Surah al-Isra ayah 110, Allah subhanahu wa ta’ala states, Say [O Muhammad], Invoke Allah or invoke the Most Gracious [ar-Rahman].

Ayah 2: Learning the Etiquette of Du’a

After invoking the graciousness and mercy of Allah subhanahu wa ta’ala we utter a few words in His praise. This is similar to any business or official correspondence we may do in our daily lives; when we write a letter to someone we don’t begin with complaints or grievances.

In ayah two, we learn the etiquette of making du’a. We can put forward our request abruptly and selfishly with complete disregard to the Being we’re addressing or we can take time to think through our words and then present them beautifully.

We beautify our du’a by saying, Alhamdu lillahi rabbi lAAlameen which means: All praises and thanks (be) to Allah, (the) Lord (of all) the world.

Ayahs 3 and 4: Stating the Attributes

We then proceed to the next ayaat where we describe a few of His attributes. We say, ArRahmani ArRaheem meaning, The Most Gracious, the Most Merciful, and Maliki yawmi alddeen— (The) Master (of the) Day (of the) Judgment.

One may well wonder about the difference between being gracious and being merciful. The Quran itself answers this question. In Surah Al-Imran ayah 152, Allah subhanahu wa ta’ala states that He is Most Gracious to the “believers” and in Surah al-Baqarah ayah 143, He tells us that He is full of kindness and His mercy is for all of mankind regardless of what they may choose to follow.

This is an important aspect. He has not extended His graciousness to the mushrikeen and other disbelievers, yet He has not limited His mercy to the Muslims only. Subhan’Allah!

In ayah 4, we’re acknowledging that there will be a day when we’ll return to our Creator and give account for every deed we’ve done. That will be the day when we’ll be told, iqra kitabika, i.e. read your book.

How many of us would be gladdened to read it out loudly in front of that large audience, the entire creation? Acknowledging that our Hereafter depends on our life in dunya, we remind ourselves that we cannot spend our lives blinded by ignorance.

Immediately after, we recognize our weakness. We acknowledge that it’s Him we worship and from Whom we seek help. Worship here is not confined to prostrating five times a day, fasting in a specific month, going for Hajj, etc. These are rituals that distinguish us from the non-believers. Worship is a broad term that covers a variety of acts such as, reverence, devotion, intense love, submission, obedience, servitude, and adoration.

In this ayah, we’re admitting that we’re “slaves” and He is the “Master”. What does a slave do? A slave:

In today’s time, when we refuse to submit to His commands or live our lives according to His instructions, we can’t claim iyyaka nabudu, i.e., “we worship only You”. Whoever takes precedence over Allah subhanahu wa ta’ala in your life (aoothubillah) becomes your master.

Ayah 6: Prayer for the Righteous Path

After praising Allah subhanahu wa ta’ala, identifying His attributes and acknowledging our slavery to Him, we make the du’a ih’dina l-sirata l-mustaqeema. Sirat in Arabic is used for path, whereas mustaqeem means straight. Hence, in this ayah we request guidance towards the straight path.

Dr. Muhammad Muhsin Khan and Dr. Muhammad Taqi-ud-din Al-Hilali write in their “Interpretation of the Meanings of the Noble Qur’an” that guidance is of two types. Guidance of taufeeq where Allah subhanahu wa ta’ala opens up one’s heart to receive the truth and the Guidance of irshadthrough preaching by Allah’s Messengers and pious preachers who preach Islamic Monotheism.

Ayah 7: Being Specific in Du’a: Setting Up Role Models

Continuing our du’a we say, sirat alladhina an’amta alayhim ghayri lmaghdubi alayhim wala l-dalina, which means, The path of those on whom You have bestowed favor, not of those who have evoked [Your] anger or of those who are astray.

This part indicates that we must set up role models for ourselves. Who do we want to idealize? Those on whom Allah subhanahu wa ta’ala is showering His blessings or those who evoked His anger or went astray?

By making this du’a in a way we’re seeking refuge from emulating the behavior of these two groups of people. Books of tafseer tell us that the Jews were immensely disobedient and ungrateful to Allah subhanahu wa ta’ala despite His countless favors on them. Hence, they evoked His anger. On the other hand, Christians instead of following the teachings of Prophet Eesa aalyhi sallam went astray.

Narrated by Adi bin Hatim radhiAllahu anhu: I asked Allah’s Messenger sallAllahu aalyhi wa sallam about the statement of Allah ghayri lmaghdubi alayhim, he replied, ‘they are the Jews’. And wala l-dalina. He replied, ‘the Christians, and they are the ones who went astray’. [At-Tirmidhi, Abu Dawud]

Aameen is like a full-stop at the end of the sentence. It seals our du’a. Many people utter aameen in a rush, not knowing the benefit of reciting loudly. This may be truer if you have never offered a prayer in congregation. That’s the only time when the musalleen actually speak up during Salah. A hadith narrated by Abu Huraira radhiAllahu anhu tells us when the Imam says sirat alladhina an’amta alayhim ghayri lmaghdubi alayhim wala l-dalina then you must say aameen for if one’s utterance of aameen coincides with that of the angels then his past sins will be forgiven. [Bukhari]

Has this article added anything new to your knowledge? Was it beneficial to you? If yes, then today when you perform your salah try being conscious of every ayah that you recite. Take your time and recite it from your heart. Do you know that Allah subhanahu wa ta’ala responds to each ayah that we utter? Wouldn’t you want to hold conversation with Him?

Uzma Awan is a communications professional and a freelance writer. Her interests are diverse. She is enthusiastic about Quran and intends to bring people closer to its study. She shares her knowledge via her blog.