Understanding Quran and Salat: The Importance of Constant Contact 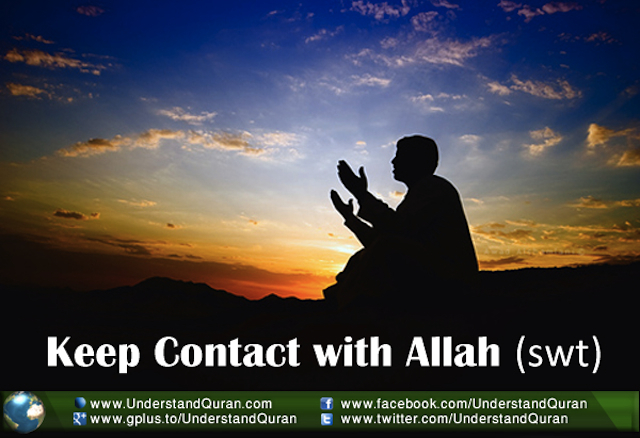 Sending Water From the Sky to Revive the Earth

Five years ago during a kidney failure I was not able to talk, walk, or breathe properly due to accumulated water in my lungs.  I was so weak, and at that time there was no hope of my recovery or of getting a transplant.  But, alhamdulillah, I was in constant contact with Allah (swt) through the Quran, prayers, zikr, and good deeds.

I came to understand the translation and commentary of this ayaat: And Allah sends water down from the sky, then he revives the earth with it after its death. Surely that is a sign for people who listen. (Al-Nahl, 16:65). And in another ayaat I read:  And when I am ill, it is who cures me. (Al-shuara 26:80)  This gave me a boost and assured me that Allah (swt) was with me. I had just to do what He ordered me to do and he would do the rest.

On Them the Angels Will Descend

Another ayaat which is very important, especially when your children are young and you are facing such circumstances, in which Allah (swt) said: Verily, those who say: “our lord is Allah” and then they stand firm, on them the angels will descend (saying):  “fear not, nor grieve! But receive the glad tidings of Paradise which you have been promised! We have been your friends in the life of this world and are (so) in the hereafter.  Therein you shall have (all) that your souls desire and therein you shall have (all) for which you ask, a hospitable gift from the oft-forgiving, most merciful”. (Fussailat, 41:30-32).

Alhamdulillah, Allah (swt) arranged everything possible for me to receive a kidney transplant in a safe and sound manner.  I could write many pages on my experience during dialysis and the transplant period; Allah (swt) helped me on each and every step.  The above ayaat strengthened my belief and alhamdulillah today I am completing more than five years with a transplanted kidney.

One more experience I would like to share is that during kidney failure I was thinking, Why am I the one who is suffering? Allah (swt) guided me in the following manner.

During the dialysis period, I was not able to walk a long way or go by car to Masjid.  The Mo’azzin of this Masjid was around 70 years old.  One day I asked him to pray for me as I was not feeling well; immediately he said, A’afak Allah (May Allah keep you in good health), and then asked me what had happened. I told him that my kidneys had failed and that I was on dialysis. He asked me for how long, and I told him for the last two weeks.

Then he opened his Thoub button and showed me his permacath (blood inlet-outlet for dialysis on chest) and told me that he had been on dialysis for the last three years. To hear this, I could not stop my tears and just bowed down and repented Allah (swt) for what I had done.  I was younger than him and he was coming to the Masjid in the early hours and remaining until the end, and on top of that he was calling us for prayer only for the sake of Allah (swt).

And who is better in speech than he who invites to Allah, and does righteous deeds, and says: “I am one of the Muslims”. (Fussailat, 41:33).  This was a sign for me that I was not the only one, that there were other people who were older and weaker than me and suffering but who stood firm without complaint.

When I was in a cockpit (with special permission) during my flight from Karachi to Dammam,  I observed and got a briefing from the pilot that when an airplane is taking off from a runway its pilot is in contact with the control tower of the same airport all the time.  The control tower guides him to approach at the point where the airplane can be ready for takeoff.

Have you ever heard news about an airplane crash? The first information given is usually that the communication between pilot and control tower has been lost and that the plane has disappeared from the radar.

Our communication with Allah (swt) also fails when we’re not even in contact with Him through Quran and prayer, and the result is that we are going astray, roaming around and passing our time in unproductive things without knowing our real destination in life.

My Action Plan for Remaining in Constant Contact With Allah (swt)

1)     Ask and seek help only from Allah (swt) through the Quran and Allah’s messengers (masnoon), following the supplications as described for each event or occasion.

2)     Read the biography of Prophet Muhammad (saw) and use it to guide and help you in your daily life.

3)     Perform all obligatory prayers, with:

a)     Iqamat (congressional):  Perform prayer on time, in Masjid and in congressional manner.

b)     Mudawemat (consistency):  Perform prayers with consistency, with punctuality, five times every day.

4)     Do dhikr (remembrance of Allah (swt)) with fikr (concentration).  This cannot be achieved until and unless we know the meaning of these azkar.

5)     Give charity (sadqat and khairat).  Make a principle that if you purchase a valuable item, immediately pay a certain amount (fee sabeel Allah) for the sake of Allah(swt) to protect the same from bad eyes.

Muhammad Khalid Khan is a Pakistani national now residing in Dammam, Saudi Arabia. He has been working as a Rig Coordinator (HR Department)  for Arabian Drilling Company of  Dhahran, Saudi Arabia for the last 17 years.