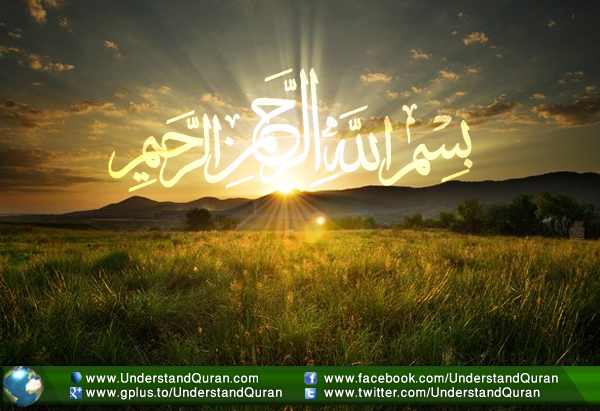 In the Name of Allah, The Most Gracious, The Most Merciful

Let’s start with a “reality” check.
On which occasions in your daily life do you say bismillaahir-rahmaanir-raheem?
Do you only say it in your prayer at the beginning of surah al Fatihah? When reading the Quran?
Are you of the ones who constantly say this phrase at the start of eating, drinking, going to the bathroom, leaving the house and even when you are in pain?

Now the real question which is supposed to wake us up today is this:

How many times do you say bismillaahir-rahmaanir-raheem while actually reflecting on it?

SubhanAllaah, there’s a world of productivity behind this beautiful statement which remains veiled for many, many believers.Today we look at this phrase in another light.
It’s time to open our eyes and realize that saying it with your heart is one of the most productive habits you can teach yourself and your children!

The Basmalah: Words of Power

Saying or writing bismillaahir-rahmaanir-raheem is called the basmalah.  It is most often translated as “In the Name of Allah, The Most Gracious, The Most Merciful” (but there are a number of variations). The core message is that the basmalah consists of three beautiful parts: The name Allaah and two of His great attributes: Ar-Rahmaan and Ar-Raheem. This statement alone should melt our hearts if we would really remember our Lord and His greatness, love, and care for us while saying it. However, for most of us it became lip-service.

So how will the basmalah make you more productive? Make it a habit. More important, make it a conscious habit. Habits are normally things we don’t even notice anymore; the key with the basmalah is to say it with your tongue and heart.

Let’s first go back to what productivity means in Islam. In the material world people would say productivity is a measure of the efficiency of a person, machine, factory, system, etc., in converting inputs into useful outputs.
As Muslims being productive means simply one thing: utilizing this world in a way which brings you the pleasure of Allah ‘azza wajal. If you gain His pleasure and He subhanahu wa ta’alaa is happy with you, you’ve won.  And only by the blessing of Allah subhanahu wa ta’alaa you can be truly productive.
The  Prophet ﷺ said, Every significant act in which bismillah is not mentioned is cut off (from blessings). So to gain the blessings from Allah ‘azza wajal, you say the basmalah!

Here are some reflection points for you on the basmalah:

Yes, Shaytan. He loves you to be unproductive, lazy, and above all, to forget about Allah ‘azza wajal. So first of all, when you say, “In the Name of Allah, The Most Gracious, The Most Merciful” , think about Allah ‘azza wajal. Really think about Him. Remember Him. Show Him you didn’t forget about Him. Show Him He is your Most Beloved. Show Him that you rather mention His Name than cursing whatever thing went wrong in your life.

A typical example: you bump your foot again the table and you say “stupid table!” (For parents: how many times have you said, when your child hurts himself, “naughty table”?) This is the time for the basmalah.  To defeat Shaytan and show your love for Allah ‘azza wajal.

If you teach yourself to start speaking with the basmalah then would you easily start gossiping? Or lying? It is an instant reminder for yourself and a motivation not to say or do bad things. How can you do a sin starting with the name of Allah subhanahu wa ta’alaa? So making the basmalah a habit can help you to stay away from sinning.

We all have many worries and stress. We have financial problems, can’t find a suitable job, we encounter people who harm us and this often hits us all when we close the door of our homes behind us. The Messenger Of Allah ﷺ said, “If any one of you, when leaving the house says, ‘In the name of Allah, I trust in Allah, there is no power and might except from Allah,’ (Bismillaahi tawakkaltu ‘alaa Allahi wa laa hawla wa laa quwwata illaa billaah) your needs shall be fulfilled, you shall be saved from difficulties and hardships. Shaytan hearing these words leaves him.”  [Al-Trimidhi]
If you want to be protected and productive as soon as you leave your house, memorize this dhikr and say it every day! What an easy act with immense blessings. On the opposite, we should also say the basmalah when we enter our houses. Everything in Islam is truly in such a beautiful balance. Yaa Ar-Rahmaanir Raheem.

If you ever suffered from pain in your body you instantly feel less productive because you can’t do the things you wanted to do.  Uthman bin Abu al-As Al-Thaqafi radiyallahu ‘anhu reported that he made a complaint of pain to Allah’s Messenger ﷺ that he felt in his body at the time he had become Muslim. Thereupon Allah’s Messenger ﷺ said: Place your hand at the place where you feel pain in your body and say, ‘In the name of Allah,’ three times and seven times ‘I seek refuge with Allah and with His Power from the evil that I find and that I fear.’” [Muslim]
A hidden gem is that we should always remember Allah ‘azza wajal and have full trust in His power, instead of decreasing our worship because we are so “busy” with our pains!

At the beginning of a contract or a document of communication, writing the basmalah is a virtuous act to seek barakah (blessings) in whatever you want to achieve with this writing.
[Queen Sheba] said O chief! Surely an honourable letter has been delivered to me. Surely it is from Sulaiman, and surely it is in the name of Allah, the Most Gracious, the Most Merciful; [Surah Al-Naml, Ayah 29-30]

6. Remembering your Most Beloved and His Care for you

What do we teach our children from very young? “Say bismillah and eat!” However, do we teach them what a beautiful remembrance this is at this specific moment. Who gave you this food? Who gave you this drink? SubhanAllah, remind yourself of the infinite mercy and care of Allah ar-Rahmaan for us. We are simply wrapped up in it.

Allah ‘azza wajal could have chosen the basmalah to consist of other attributes, but He chose these two beautiful sifaat.  SubhanAllah, let the name of your most beloved be on your lips all the time.

From now on, every time you say bismillaahir-rahmaanir-raheem, feel it with your heart.
Reflect on Allah’s mercy for you.
Be thankful to Allah ‘azza wajal that He chose you to say the basmalah and that He gave you the chance to reap all its virtues.