The Sweetness of Eemaan 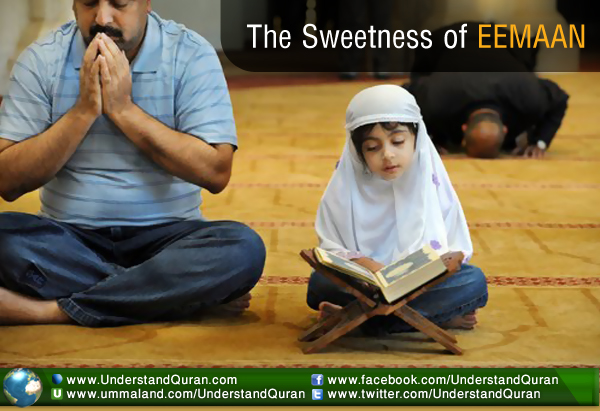 The Eemaan of Speech

The eemaan of speech consists of the speech of the heart and of the tongue, both of which must be in complete harmony with each other.  In other words, whatever we feel in our hearts must be confirmed by our words. There must be no contradiction between the two.

The heart’s firm belief in La Illaha Ilallaha— which entails the knowledge of Allah (swt),  His message, His prophets, His angels, the Day of Reckoning and Qadar— should  be expressed and  reinforced by our tongue through remembrance of Allah(swt), dhikr, recitation of His Book, seeking His forgiveness, spreading His  Message, enjoining good, and forbidding evil.

The Eemaan of Action

The eemaan of action  also involves the heart and tongue but is manifested through the action of the limbs.  When our heart and tongue are in coordination and the sincerity of our heart’s belief is on our tongues it’s only natural that our limbs will do all that is required by our beliefs—  fasting, purification, salah, hajj, etc., and avoid what is forbidden—  zina, usury, backbiting, lying, etc.

Our speech, our actions, our heart, our limbs, and our tongues must all speak the same language.

This then is what eemaan requires.  As for tasting the “sweetness of eemaan,”  anyone able to achieve and maintain the above formula for coordination between heart, tongue, and limbs has an excellent chance of tasting the sweetness of eemaan; his heart is already fertile and recognizes the truth,  thus his tongue convincingly conveys whatever is in his heart.  And because his heart is convinced, he finds no difficulty in carrying out the actions of the limbs.

Eemaan Can Both Grow and Diminish

We as human beings are not perfect and therefore it isn’t possible to always remain at the peak of eemaan.  Our levels of eemaan will undoubtedly fluctuate, increasing and decreasing.   An act of disobedience can ruin the whole day while a good deed does indeed lift our spirits and makes us feel closer to Allah (swt).

We must keep a constant check on ourselves, for Shaitaan is always looking for an opportunity to make us fall into his trap. We must develop a relationship with the Quran by reading it with understanding and pondering its meaning.

Take small steps towards Allah (swt) and make dua for His guidance constantly.   The believers are only those who, when Allah is mentioned, feel a fear in their hearts and when his verses (this Quran) are recited unto them, they (i.e. the verses) increase their faith; and they put their trust in their Lord (alone). [Quran, 8:2]

What Brings You the Sweetness of Eemaan

Now that we’ve briefly described the meaning of eemaan– and I do mean briefly because the subject could fill volumes—  let’s try to define the “sweetness of eemaan.”

The main ingredient for tasting this sweetness is sacrifice. Our beautiful deen is full of and is in fact based on this one word— sacrifice—  be it the sacrifice of the Prophet (saw) himself on his visit to Taif, or the persecution faced by Bilal (ra) or of the Sahabi who was thrown into boiling oil and cried because he had only one life to sacrifice in the way of Allah.

Choosing Allah (swt)’s Commands Over the Desires of Our Nafs

When confronted with a situation where on the one hand Shaitaan is trying desperately to persuade us to submit to our nafs and we’re on the verge of giving in to our worldly desires and whims and on the other hand with Allah (swt)’s taufeeq, we pull ourselves back and set aside our desires purely for Allah (swt)’s sake. When we put Allah (swt)  and His commandments first that’s when we can  feel and taste the sweetness of eemaan.

As an example, I would like to relate a true story that happened recently.

A young couple with three children discovered that their elder daughter aged seven, had a hole in her heart.  Two surgeries were performed in Karachi but the doctors said  she would require a third surgery and recommended she be taken to Delhi India.  The doctors in Pakistan had told them that their daughter had excellent chances of total recovery, and this was confirmed by the doctors in Delhi.

The mother, who’d been attending Quran classes before she went to India, started to pray:  “Oh Allah, you know that we’re in a foreign land and we have no one here. Oh Allah, you are our only  Provider— please help us.”

In direct answer to her prayers, several people appeared out of nowhere, willing to give the blood.  The young mother was overwhelmed by Allah (swt)’s mercy and no doubt would have experienced a sudden surge in her eemaan.  However, in spite of the child having been give the blood transfusions on a timely basis, a few hours later, the doctors came to inform the parents that their daughter had died during surgery.

Needless to say, the parents were devastated. They could hardly believe it.  In addition to this unexpected and terrible loss was the fact that they didn’t know a soul  in Delhi.  What were they to do? At that time, too, the mother turned to Allah for help and guidance.

Again  Allah (swt) responded and sent a miracle in the form of a family related to distant relatives.  They insisted on taking care of the needs of the young couple

The mother wanted to bathe her daughter herself, but had absolutely no idea of what to do.  She phoned her Quran teacher in Karachi who gave her detailed instructions. However, the most important issue was where to bury the young girl.  Again, she asked her Quran teacher: “What does shariah say?”

She was told that according to hadith it was preferable that the burial should not be delayed. (It is related by At-Tabarani on the authority of Abdullah ibn Umar who says: “I heard Allah’s messenger (peace be upon him) say: When anyone of you dies, do not keep his body. Be speedy when taking him to his grave.”) This meant burying their daughter in Delhi.

This was not an easy decision to make for parents who just hours ago had lost their precious daughter, but the belief in their hearts came to their lips, and their limbs followed in action.  They decided to bury her in Delhi.

After the burial the young couple left Delhi with heavy hearts, and only those who’ve lost children would be able to comprehend their grief.  But deep down in their hearts, there was a sense of satisfaction, a sweetness mixed in their grief because they knew they’d been guided to do what their hearts believed was pleasing to Allah.

Shireen Husain is a grandmother and a student of Quran and hadith.  She lives in Karachi with her husband.