The Regret of Missing a Good Deed 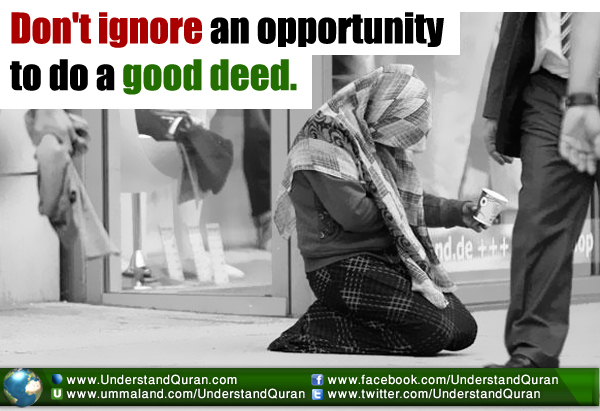 Recently I’d been feeling very hard-hearted and unemotional; I couldn’t feel anything for anyone close or far, no matter what they were going through. I couldn’t cry. I would ask Allah (swt) to soften my heart but even this asking was emotion-free. I hated this feeling. But one afternoon everything changed, and my dua was answered.

On a bright, sunny afternoon I sat in a fast food restaurant with a colleague. Our food had just been served. As we began eating I looked through the window and saw an elderly woman with a walking frame being helped into the restaurant by a couple who were coming to eat at the restaurant also.

The old lady slowly strolled over to the food counter. A waiter spoke to her briefly, but it seemed he was struggling to understand her. He called another waiter who spoke to her for a few minutes and then left. My attention returned to my food.

Shortly afterwards I noticed the old lady walking, slowly, towards the door, empty-handed. As she made her way to the door she looked at the food on our table. I watched her walk out the door all alone and disappear out of sight.

A few minutes later the thought entered my mind that this lady had walked into the shop wanting something but had left empty-handed. What if she’d been hungry but the waiters hadn’t understood her? What if she hadn’t had the money? The image of her eyes on our food as she walked out made my eyes swell with tears.

Why hadn’t I realised sooner? My hunger died and I couldn’t even look at the food. I could have asked her, could have brought her to our table and shared our food with her, I thought as tears began rolling down my cheeks.

I had indeed missed out on a good deed, and I had missed a chance to bring a smile to a lonely elderly person’s face. When we reached the office I went to the prayer room and cried like I hadn’t cried in many days. I asked for Allah’s (swt) forgiveness and asked Allah (swt) to give me a chance to meet this lady again and serve her for His Sake. I made du’a that Allah (swt) would grant me the ability to perform good deeds for His sake, to recognise a good deed awaiting me and to hasten to perform it. Indeed those who hasten to do good deeds are on the path to success.

Abu Hurairah (ra) reported: The  Messenger of Allah (saw) said, “Hasten to do good deeds before you are overtaken by one of the seven afflictions.” Then (giving a warning) he said, “Are you waiting for poverty which will make you unmindful of devotion, or prosperity which will make you corrupt, or a disease which will disable you, or senility which will make you mentally unstable, or sudden death which will take you all of a sudden, or Ad-Dajjal who is the worst expected, or the Hour; and the Hour will be most grievous and most bitter.” [At-Tirmidhi]

Some benefits of doing good deeds:

Believing men and believing women are the protecting friends of each other: they enjoin right and they forbid wrong. [Qur`an, 9:71]

Whoever works righteousness — whether male or female — while he (or she) is a true believer (of Islamic Monotheism) verily, to him We will give a good life (in this world with respect, contentment and lawful provision), and We shall pay them certainly a reward in proportion to the best of what they used to do (i.e. Paradise in the Hereafter). [Quran,16:97]

Compete in doing good deeds and don’t leave them too late; the regret is painful and it’s a moment you can’t get back.

Sister Nazia Janar is an Online Marketing Professional also volunteer Head of Publications at I am Alima, an organisation aimed at empowering Muslim women to reach their ultimate potential.