The Embarrassing Question That Got Me Talking to Muslims About Marriage 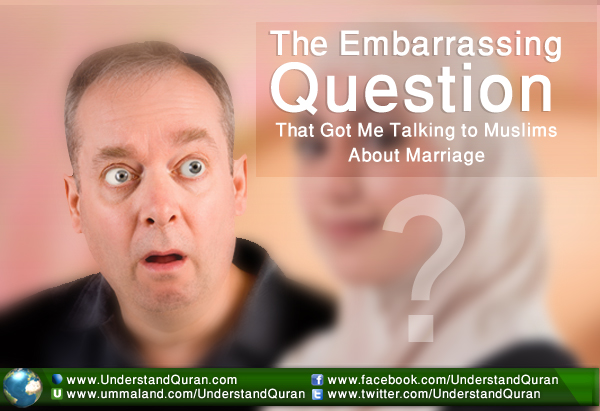 They are clothing for you and you are clothing for them. Allah knows that you used to deceive yourselves, so He accepted your repentance and forgave you. So now, have relations with them and seek that which Allah has decreed for you. [from Quran, 2:187]

I’ll never forget the first embarrassingly explicit question I was asked.  During one of my earliest series of lectures, when I was still in my very early twenties, an older sister came up to me and said she needed to ask a question.

I was expecting something related to the topic of the lecture (the explanation of Kitab al-Tawhid), so I said, “Yes, go ahead.”

Instead she asked a very frank question about the legal permissibility of something she and her husband did.

At a Loss For Words

I turned beet-root red, looked down in embarrassment, and muttered an incoherent response. Truth be told, I didn’t even know the answer. They hadn’t taught us such material in Madīnah!

Over the next few years, as I delivered more sermons and lectures, I realized that the most common area in which Muslims needed guidance was spousal relationships. It didn’t matter if my talk were about some obscure and outdated fourth-century theological controversy in Nishapur, from America to Dubai and from Australia to the UK, almost invariably a question or two would come up regarding a personal, marriage-related problem.

On the Verge of Tears

Just a few weeks ago, after a seminar I delivered, a sister approached and asked for a few minutes of my time regarding a private issue. She told me that she had been married for a few years but her marital life was not satisfactory. Almost on the verge of tears, and in a very embarrassed state, she said that her husband was a good man in most respects, but in “that department” he really was quite incompetent and even selfish.

All he was interested in was satisfying himself; her needs seemed to be of no concern to him. Many times she was left in tears after what should have been a moment of deep intimacy and romance.

Her level of frustration and exasperation had continued to grow. Not only did her husband not care, he wasn’t even willing to acknowledge that there was a problem. Was it Islamically permissible, she asked, for her to ask for a divorce and try to find happiness in another marriage?

On the Verge of a Second Wife

Similar problems abound among brothers as well, although few are manly enough to admit it and seek guidance. The most common complaint among men is that their wives don’t seem nearly as interested as they are in being intimate. For these men, both the quantity and the quality of experiences are unsatisfactory.

As a result, many brothers are tempted to believe that the only solution is in marrying a second wife. They don’t realize that such a “solution” will in all likelihood compound this very problem, not to mention add a whole multitude of new ones as well. Instead of finding fault with an existing wife, a husband would fare better in seeing what he can do to improve the situation. Most times, a little bit of understanding and compassion (also known as “romance”) will go a very long way.

In my humble opinion and based on my observations, most of this tension arises from perceived gender roles and misguided expectations of how the other should interact in a marriage. And while sexual roles and expectations are by no means the only problem, they are clearly a major one, one that exacerbates other tensions within a marriage.

The problem is underscored by the fact that most men and women haven’t a clue about how the opposite gender thinks, feels, and acts. This ignorance is found in both Muslims and non-Muslims, but in this regard, non-Muslims typically do have an edge over us.

Because of their consistent exposure to the opposite sex (and their frequent dating), non-Muslims do have a better understanding and are usually more sympathetic to the needs of the opposite sex.

The problem is compounded for most of us, since we as a modern generation of Muslims are caught between two cultures: the excessive ultra-conservatism of our parent’s culture (in which parents never even held hands in front of their kids, or addressed each other in endearing terms, or indeed showed any signs of being romantic), and the hyped over-sexuality and over-romanticism of the culture surrounding us.

Such an onslaught of problems and questions compelled me to read up on those issues not found on the curriculum at Madīnah. While many of the books I read were extremely beneficial in terms of understanding the psychological and emotional differences between men and women, all of them were written for people with very different ethics and value systems than our own. This material, I strongly felt, had to be “Islamified” and then passed on to others.

Last year I got the opportunity to express some of those ideas in front of an audience. A dear friend and mentor was teaching a class about the fiqh of marriage. As part of that class, one section would deal with issues of intimacy. It just so happened that I would be in that same city for another reason and would be free on that particular day.

The Shaykh, when he heard that I would be in town, confessed that he felt awkward doing this section because he hadn’t been raised in this culture. He felt that I could better relate to the issues facing our youth. At first I was quite hesitant to take up this offer, but after thinking through this issue, and with the continued persistence of the Shaykh, I decided to put myself in the “hot seat” and go through with it. I decided that it would be appropriate to separate the brothers and sisters and lecture one gender at a time.

The results and feedback after my talk astounded me. Overwhelmingly, people thanked me for the frank and relevant advice, for speaking in explicit terms and moving beyond simplistic one-line platitudes.

Word quickly spread (along with a few inevitable jokes!), and this class led to a few more speaking engagements along similar topics. Along the way, I had to research more and more and expand into more issues. Feedback and questions from audiences also helped me shape the topic and fine-tune my talks.

The last time I taught the class– to a group of brothers and sisters in the UK– I asked each student to fill out an anonymous feedback form regarding the talk. I specifically told them to point out any weaknesses and mention criticisms. Alḥamdulillāh, the survey came back without a single negative comment.

Again and again, people expressed the sentiment that this information needed to be taught to all Muslims of our generation: those who were yet to be married, those who were newlyweds and experiencing problems, and those who wanted healthier marriages.

This is why, after praying istikhārah and speaking to others about this issue, I have decided to commit some time to this area and address this very delicate subject directly, from an Islamic perspective. The initiative is called Like A Garment (www.LikeAGarment.com), from the famous Quranic phrase of spouses being like garments to one another.

The website has two aims: 1). to disseminate information about this topic (which will, insha Allāh, be beneficial to all Muslims, single and married), and 2). to garner, via anonymous questionnaires, the problems and concerns that the Muslims of our time are facing in this area (which will help me better prepare future lectures).  I encourage those who are interested to log on to the website and sign up to receive our weekly journal.

I pray that Allāh helps me to make this project successful, and that through it many, many Muslims will be able to live better lives and obtain happier marriages! Āmīn.

Shaykh Yasir Qadhi is a prominent American Muslim thinker, teacher, and writer. His inspiring videos can be seen at http://www.likeagarment.com.