Taqwa: Balancing the Fear of Allah (swt) With Our Love for Him 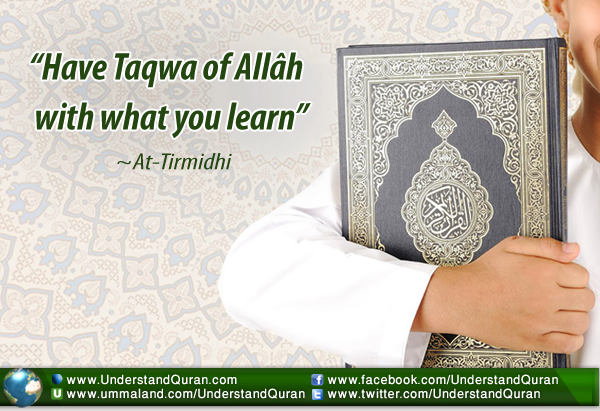 A precise definition of Al-Muttaâqun appears early in the Holy Qur’an: This is the Book (the Qur-an), whereof there is no doubt, a guidance to those who are Al-Muttaâqun [the pious and righteous persons who fear Allâh much (abstain from all kinds of sins and evil deeds which He has forbidden) and love Allâh much (perform all kinds of good deeds which He has ordained)]. (2:2)  The following Ayah announces the intricate connection between Al-Muttaâqun and Taqwa: O mankind! We have created you from a male and a female, and made you into nations and tribes, that you may know one another. Verily, the most honorable of you with Allah is that (believer) who has At-taqwa [i.e. he is one of the Muttaqun (the pious). Verily, Allah is All-Knowing, All-Aware. (49:13)

That which links these two concepts together is ‘Ibaadah.  Ibaadah involves those actions of the heart, mind and body that are consistent with what Allâh has ordained and avoids those actions which Allâh had forbidden.  The fruit of Ibaadah is Taqwa.  Taqwa involves the cleansing and purification of the heart and soul as a consequence of endeavoring to please Allâh.  This requires the introduction of a fourth concept: Ikhlaas.  Ikhlaas means sincerity, that an action is performed solely for the pleasure of Allâh, as a result of one’s love for Him, while fearing that one will invoke his anger. Allâh said: Say (O Muhammad) “Verily I am commanded to worship Allâh (Alone) by obeying him and doing religious deeds sincerely for His sake only.”  (39:11)

Considering the two Ayat quoted above in connection with one another, it is clear that having Taqwa requires the individual to possess both fear of Allâh and love of Allâh.  To merely love Him but not fear Him, or to fear Him and not love Him does not represent Taqwa.  Either one, by itself represents an incomplete relationship with Allâh.  They must each exist in one’s heart in a state of completeness, dynamically balanced with one another for true Taqwa to exist.  And the love is requited: Yes, whoever fulfills his pledge and fears Allah much; verily, then Allah loves those who are Al-Muttaqun.  (3:76).

Taqwa comes from Allâh: While as for those who accept guidance, He increases their guidance and bestows on them their piety (Taqwa) (47:17)  The comprehensiveness and importance of Taqwa is shown in the following hadith: Narrated Ibn Ashwa: from Yazid bin Salamah Al-Ju’fi, he said: “O Messenger of Allâh! I heard so many narrations from you that I am afraid the last of them will cause me to forget the first of them. So narrate a statement to me that will encompass them. So he said: ‘Have Taqwa of Allâh with what you learn.'” (at-Tirmidhi)

The following ahadith demonstrates that Taqwa – though established in relationship to Allâh – is relevant in our dealings with our Muslim sisters and brothers: Abu Hurairah narrated that the Messenger of Allâh said: “The Muslim is the brother to the Muslim, he does not cheat him, lie to him, nor deceive him. All of the Muslim is unlawful to another Muslim: His Honor, his wealth, and his blood. At-taqwa is here. It is enough evil for a man that he belittle his brother Muslim.”  (at-Tirmidhi)

The love and fear Allâh should free us from fear of Satan:  It is only Shaitan (Satan) that suggests to you the fear of his Auliya’ [supporters and friends (polytheists, disbelievers in the Oneness of Allah and in His Messenger, Muhammad (saws), so fear them not, but fear Me, if you are (true) believers.  (3:175)  No doubt! Verily, the Auliya’ of Allâh [i.e. those who believe in the Oneness of Allâh and fear Allâh much (abstain from all kinds of sins and evil deeds which he has forbidden), and love Allah much (perform all kinds of good deeds which He has ordained)], no fear shall come upon them nor shall they grieve. (10:62)

The Prophet (saws) said, “The most common thing which leads people to Paradise is Taqwa of Allâh and good conduct, and the most common thing which leads people to the Hell Fire is the mouth and the private parts.” (at-Tirmidhi)  Those who possess Taqwa shall be exempt from fear on the Day of Judgment.  The Day We shall gather the Muttaâqun (the pious and righteous persons) unto the Most Gracious (Allâh), like a delegation (presented before a king for honor).  (19:85) Then We shall save those who used to fear Allah and were dutiful to Him. And We shall leave the Zalimun (polytheists and wrongdoers) therein (humbled) to their knees (in Hell).  (19:72)

Tafseer ibn Kathir mentions that Atiyah As-Sa’di said the Prophet (saws) said, “The servant will not acquire the status of those with Taqwa until he abandons what is harmless out of fear of falling into that which is harmful.” (Ibn Majah, Tirmizi)  An individual who possesses Taqwa continually strives for that which will lead to righteousness in this world and to that which Allâh has promised the Muttaâqun in the Hereafter.  Allâh said: Those who believed and used to fear Allah much (by abstaining from evil deeds and sins and by doing righteous deeds), for them are glad tidings in the life of the present world and in the Hereafter.  No change can there be in the Words of Allâh.  This is indeed the supreme success.  (10:63-64)