Taking Allah as Our Rabb 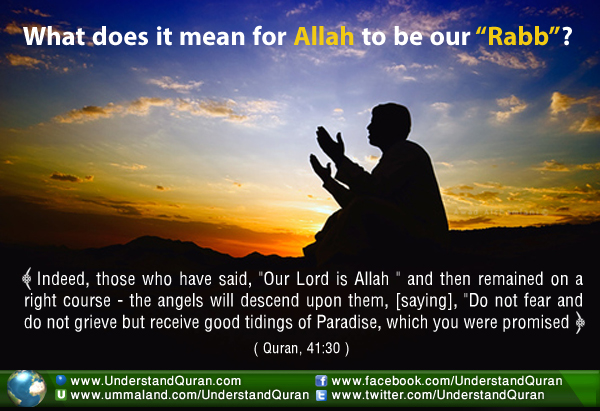 Allah mentions a very special group of people in Surah Fussilat. These people don’t just say “we believe in Allah”—they say that their Rabb is Allah. Rabb in most English translations is translated as “Lord,” but that doesn’t completely cover the meaning.

What does it mean for Allah to be our Rabb?

Rabb is the One who creates, sustains, and owns everything in existence. Ustadh Nouman Ali Khan mentions that the most suitable English translation would be Master. So in declaring Allah as Rabb, these people, may Allah make us like them, have implied that they themselves are Allah’s abd (slaves).

Abd is the most honourable title in the Quran for any human being. Allah has honoured prophets by calling them abd, and if that is the case then what about sinners like us? True greatness comes in being a proper slave of Allah, wherein one submits to Allah completely.

Allah continues in the same verse, then remained steadfast. It is easy to be a part-time slave of Allah, or to be a proper slave of Allah for a a few days, but true slavery entails being steadfast in obeying Allah, and staying away from what Allah has prohibited.

Allah continues: on them the angels will descend, saying, “Do not fear, and do not grieve; and be happy with the good news of the Jannah (Paradise) that you had been promised.”

Imagine this: you are on your deathbed, and while everyone is crying around you, angels descend upon you tell you that you have nothing to fear and nothing to be sad about. They also give you the glad tidings of Jannah. What more can a Muslim strive for? That is the reward of being a slave of Allah.

Allah mentions that for those who are truly the slaves of Allah, angels will be their guarding friends in this world and also in the hereafter. Also mentioned is the ultimate pleasure of Jannah— “whatever your souls desire.” Whatever we fantasize about, whatever we dream and wish, in Jannah every one of those dreams and wishes will be fulfilled for the slave of Allah.

In the next verse: A gift of welcome from the Most-forgiving, the Very-Merciful. This is to prevent the ego from taking its place in the picture. Allah mentions that all of this is a welcoming gift from Allah out of His Mercy, not only because of the deeds of the slave.

Many times we read these verses and we think, “Ah, but we are bad people, we are sinners. These gifts are for the best of people, and we would have to be sinless to achieve this rank.” But Allah mentions “the Most-Forgiving, the Very-Merciful” to remind us that even these people make mistakes and sin as well, but Allah forgives them for their unwavering commitment.

The Qualities of Those Who Accept Allah as Rabb

And who is better in speech than he who calls to Allah, and works righteously, and says: “most certainly I am one of the Muslims.”

In the very next ayah, Allah poses a rhetorical question, asking who can be better than these people. And their qualities are that they call to Allah. Then they also do the good deeds themselves and calls themselves Muslims. Those who accept Allah as Rabb are those who combine both dawah and actions at the same time and who call themselves Muslim.

Calling oneself Muslim has two implications: number one is that he doesn’t call to any group or party or sect; rather he calls to Islam, and number two is that he does not place himself on a higher pedestal than other believers out of pride and arrogance. Rather, even though he might be at a different level of Iman, he calls himself Muslim and does not arrogantly look down upon the people.

What then is the way forward for dawah, and what is the first step? Allah Himself makes it clear in the following verse: Good and evil are not equal. Repel (evil) with what is best, and you will see that the one you had mutual enmity with him will turn as if he were a close friend.

More often than not, we get terribly angry when someone attacks Islam or the Prophet sallallahu alayhi wasallam. However, instead of behaving like the hooligans that the media paints us as, we should be more tactful and clever. We must acknowledge the fact that in their position we might have done the same and so we should give everyone the benefit of the doubt.

Had it not been for this principle, Islam would not have been successful in its first generation. The Prophet sallallahu alayhi wasallam and his sahaba employed this method and many hateful people among the Quraysh were won over. Ironically the latter part of the verse mentions that the one who was the enemy will become a friend.

Allah in the next ayah mentions some further qualities one needs to have in order to execute this method: But only those who are steadfast in patience, only those who are blessed with great righteousness, will attain such goodness.

Naturally, the human reaction to the abuse of oneself, one’s belief, or something one holds dear is particularly testing, and hence Allah mentions  being patient. Ibn Kathir commenting on this says, “no one accepts this advice and works according to it, except for those who can be patient in doing so, for it is difficult for people to do.” Also it shows that patience comes with increased righteousness and that the one who does it will attain great good in shaa Allah.

For every good deed one does, Shaytan is there with his attacks. How to fight back?

Allah continues: And if an evil whisper from Shaytan tries to turn you away, then seek refuge in Allah. He is All-Hearing and All-Knowing.

Allah also knows that Shaytan will whisper to us, especially when our dawah doesn’t work to either give up or to get angry, and in those moments Allah asks for another moment of patience and to seek refuge in Allah. What is the point of getting angry? Doesn’t Allah hear what is being said to you, and know what is happening to you? And Hence Allah ends the passage, He is All-Hearing and All-Knowing.

Going over so much we might actually forget the larger picture. We might actually give up when we think that we have to be nice to those being bad to us (ouch— that really hurts the ego doesn’t it?) Why not just give it up?

Again, let’s go back to the beginning. Would we not want angels to be our guarding friends in this world and the next? Would we not want to be given glad tidings of Paradise on our deathbed? Do we not want to go to Paradise so that we can fulfil our wildest dreams? Is this not worth taking the trouble for a reward which knows no bounds? Are we then ready to call to Allah, work righteousness, and say “I am one of the Muslims?”