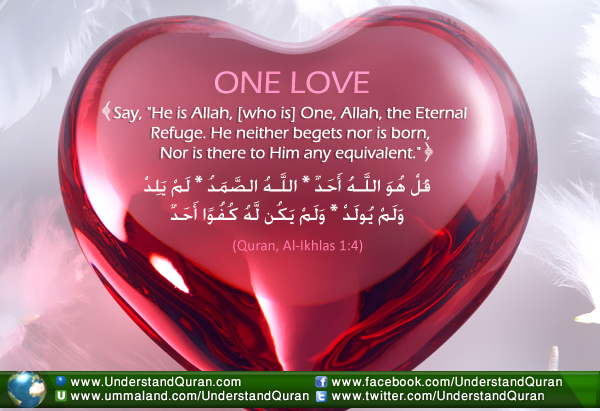 In today’s Jumuah Special we find out how to love— and live by— an amazing surah of true love and endless productivity— Surah al-Ikhlaas.

What is your relationship with this surah right now?

Abu Sa’eed al-Khudri radiyallahu ‘anhu said: The Prophet salallahu ‘alayhi wa sallam said to his Companions: ‘Could any one of you not recite one third of the Quran in one night?’ They found the idea too difficult, and said, ‘Who among us could do that, O Messenger of Allaah?’ He said, ‘Allaahu’l-ahad, al- samad is one third of the Quran.’ [Al-Bukhaaree]

The Reward of Recitation

Surah al-Ikhlaas (“sincerity”) was revealed in Makkah at a time when the concept of “God” was being questioned. Allah ‘azza wa jal revealed this powerful answer and this surah is a true productivity booster.

The Prophet salallahu ‘alayhi wa sallam went out of his way to emphasize the rewards of reciting the Quran. This is a rahmah, a mercy, in itself. Being rewarded just for reciting! You already know the reward you get is tenfold for each letter; according to the hadith, alif is a letter, laam is a letter, and meem is a letter, so for all three you get 30 rewards. If you complete the Quran from cover to cover you get approximately 33 million, 200,000 rewards. Imagine those rewards turning 33 million, 200,000 sins into ashes!

Yes, it’s a major task to read the entire Quran, but who doesn’t know the short surahs? Did you ever contemplate your reward if you read them over and over again? Recite them standing, sitting, lying down, doing work, tending the children, while shopping, etc.,  and gain the same reward of reciting any other surah and more!

Surah al-Iklaas has 47 letters. If you multiply this by ten you get 470 rewards. This is a beautiful example of Allah being Al-Kareem, the Most Generous!

2.      Read it three times and get the same rewards as if you read the entire Quran.

A man stood up to worship Allah at the time of the Prophet salallahu ‘alayhi wa sallam, just before dawn and recited Qul huwa Allahu ahad, but didn’t recite anything else. In the morning the man came to the Prophet told him about this, thinking that perhaps he was not doing enough. The Messenger of Allah said: By the One in Whose hand is my soul, it is equivalent to one-third of the Quran. [Al-Bukhaaree]

3.      Love it to receive the love of Allah.
Do you often think: how can I get the love of Allah? Study the meaning of Surah al-Ikhlaas, firmly believe in its message and act upon it with love. Allah subhanahu wa ta’alaa loves you for loving it!

‘Aa’ishah also reported that the Prophet salallahu ‘alayhi wa sallam sent a man in charge of a small military campaign, and when he recited Quran whilst leading his companions in prayer, he would always end with Qul huwa Allaahu ahad. When they came back, (his companions) mentioned that to the Prophet who told them to ask him why he did that. So they asked him, and he said, “Because it is a description of the Most Merciful, and I love to recite it.” The Prophet said: “Tell him that Allah loves him.” [Al-Bukhaaree]
So the Greatest, the King of Kings, the Perfect loves you just for loving this surah. So on top of the hundreds of rewards for just reciting it and the reward of one-third of the Quran, you gain your Lord’s love. Allahu akbar, just one surah!

4.      It’s a personal protector.
Read it three times when you go to bed and on top of all above rewards, be rewarded for following a sunnah, plus be protected during your sleep!  ‘Aa’ishah reported that when the Prophet salallahu ‘alayhi wa sallam went to bed, he would cup his hands together, blow into them and recite into them Qul huwa Allaahu ahad [Surah al-Ikhlaas], Qul a’oodhu bi Rabbi’l-falaq [Surah al-Falaq] and Qul a’oodhu bi Rabbi’l-naas [Surah al-Naas]. Then he would wipe as much of his body as he could with his hands, starting with his head and face, and the front of his body. He would do this three times. [Al-Bukhaaree]

5.      Recite it in your witr prayer.
Use this surah in your witr prayer and double your rewards by following the sunnah of the Prophet salallahu ‘alayhi wa sallam and gaining all the benefits that come with Surah Al-Ikhlaas.  The Messenger of Allah salallahu ‘alayhi wa sallam used to recite Sabbi hisma Rabbik al-A’laa (Surah al-A’laa), Qul yaa ayyuhaa’l-kaafiroon (surah al-Kaafiroon) and Qul huwa Allaahu ahad (Surah al-Ikhlaas)in his witr prayer, and when he had finished, he would repeat Subhaan al-Malik al-Quddoos (“Glory be to the King, the Holy”) three times, making the last vowel long on the third recitation. [An-Nisaa’i]

6.      Make paradise your right.
Abu Hurayrah reported that the Prophet salallahu ‘alayhi wa sallam heard a man reciting Qul huwa Allahu ahad, and said, ‘It is his right.’ They asked, ‘O Messenger of Allah, what is his right?’ He said, ‘Paradise is his right.’ [Ahmad]

8.      Let it speak for you on the Day of Judgment.
On top of all the rewards you get for reciting it, the love of your Creator for loving it, the protection for using it, insha’Allah it can come to your rescue on the Day of Judgment. You might have more bad deeds and sins than good deeds and imagine the Quran comes to the rescue. Allah’s Messenger salallahu ‘alayhi wa sallam said, Fasting and the Quran will intercede for man. Fasting says, ‘O my Lord, I have kept him away from his food and his passions by day, so accept my intercession for him.’ The Quran says, ‘I have kept him away from sleep by night, so accept my intercession for him.’ Then their intercession is accepted.” [At-Tirmidhi]

THE AYAH JOURNAL, Qur’an & Productivity is a global project with the exciting goal to inspire every Muslim worldwide to open the Qur’an every day, pick one ayah, and apply it to our own lives by making acting on the ayah your mission for the day. Let’s bring back the message of the Qur’an to our daily lives! Check www.ayahjournal.com and follow us on www.facebook.com/ayahjournal for vibrant Qur’an and productivity tips.