Sunnah: The Beautiful Ways of the Prophet 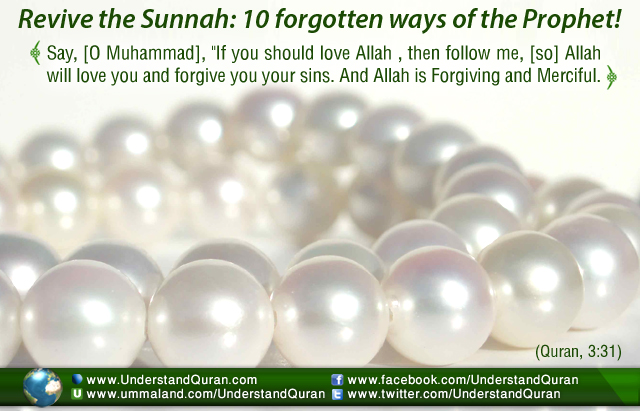 Sunnah: The Beautiful Ways of the Prophet

Imagine you had the chance to influence people and be rewarded for the things they do. Well, you do have that chance!  Are you ready to get influential?

This week’s central ayah Allah ‘azza wajal tells you about a top priority: Say: If you (really) love Allah then follow me [saws], Allah will love you and forgive you your sins. And Allah is Oft-Forgiving, Most Merciful. [Quran, 3:31]

1. Dust off that bed!        The Prophet salallahu ‘alayhi wa sallam said: When any one of you goes to bed, let him clear his bed by hitting it with his garment, for he does not know what may have come onto it. Then let him lie down on his right side . . .  [Saheeh al-Bukharee and Saheeh Muslim] This means you dust off the bed with one hand covered by the edge of your lower garment or something else, as long as you cover your hand lest there be something harmful to your hand (as explained by Imam An-Nawawi). Don’t forget to teach this to your children!

2. I go shopping and I say . . .     The Prophet said: Whoever enters a market place and says:
‘Laa ilaaha illallaahu wahdahu laa shareeka lah, lahul mulku wa lahul hamdu yuhyee wa yumeetu wahuwa hayyun laa yamootu, biyadihi alkhayru wahuwa ala kulli shayyin qadeer’ (There is none worthy of worship in truth except Allah alone, He has no partners, He has the dominion and for him is all the praise, He gives life and he takes life and he is the ever living and does not die, in his hand is goodness and he is capable of all things) Allah will write for him thousand thousand reward and erase from him thousand thousand sin and raise him thousand thousand and build for him a house in Jannah![ An-Nasa’ee, at-Tirmidhi]
You can find this dua in the well-known pocket supplication book Hisnul Muslim, take this with you, or write it down on a paper and take it out each time you go to a place where there’s people and trade (yes, even a supermarket as it all falls under the ruling of ‘market’) and watch how soon you will memorize it insha’Allah!

3. Had milk? Pass me some water, please!      The Prophet drank some milk then called for some water. Once he got the water he rinsed his mouth then said, ‘It has fat.’ [Saheeh al-Bukharee and Saheeh Muslim] Imam An-Nawawi said in Sharh Saheeh Muslim:  This hadeeth confirms it’s recommended to rinse the mouth after drinking milk.

4. Undressing? Say bismillah!      Mentioning the name of Allah before entering the toilet or taking off your clothes will prevent the jinn from seeing your ‘awrah or harming you. The Prophet said:  To put a barrier that will prevent the jinn from seeing the ‘awrah of the sons of Aadam, let any one of you say ‘Bismillah’ when entering the toilet. [At-Tirmidhi] Teach this to your children as well!

5. Hearing whispers in prayer? Fight back!     Uthmaan ibn Abi’l-‘Aas radiyallahu ‘anhu came to the Prophet and said: O Messenger of Allah, the shaytaan interferes between me and my prayer and my recitation, and he makes me confused. The Messenger of Allah said: ‘That is a devil called Khinzab. If you feel that, then seek refuge with Allaah from him (e.g ‘Audhu Billahi min-as-shaytaanir rajeem) and spit dryly to your left three times.  He said: I did that and Allah took him away from me.’ [Muslim]

6. Just woke up? Clear that nose!     The Prophet said: When one of you wakes up from his sleep, he must blow of his nose three times, for the shaytan spends the night inside one’s nostrils [Al-Bukhaaree, Muslim]

7. Take a break in salah!      Anas radiyyalahu ‘anhu said:  I pray as I saw the Messenger of Allaah, peace and blessing be upon him, leading us.  Thaabit radiyallahu ‘anhu said: ‘Anas used to do something which I do not see you doing; when he lifted his head from bowing (rukoo’) he stood up (so long) that one would say: He has forgotten (to bow down in prostration/sujood). And when he lifted his head from prostration (sujood), he stayed in that position, till someone would say: He has forgotten (to bow down in prostration for the second Sajda).’ [Al-Bukhaari and Muslim]
Imam Ibn Al-Qayyim, rahimahullah, said: This sunnah was forsaken by many people after the time of the companions, may Allaah be pleased with them, came to a close. When you pause between two prostrations you can say:  Rabbigh firli Rabbigh Firli (Oh Lord forgive me Oh lord forgive me), as the Prophet used to supplicate.

8. Put that barrier down!     The Prophet said: If any of you places something in front of him, [at least] equal [in height] to the back of a saddle, he should pray without caring who passes [in front of him] on the other (opposite) side of it. [Muslim] Note: This barrier is called a sutrah and it can be anything a person puts in front of himself while he is praying, such as a wall, or a long stick, and the such. The back of a saddle is approximately two thirds of a cubit in height [so the sutrah should be at least the same length]. It can even be a handbag or any other object with this length.

10. Don’t say “yuk!”     How many times do we say, “I don’t like that, that’s horrible!” It is narrated on the authority of Abu Hurayrah radiyallahu anhu that he said the Messenger of Allah sallallahu ‘alayhi wa salam did not ever criticise food. If he liked it, he ate it and if he disliked it, he left it. [Agreed upon]

11. Knock, knock, knock.     The Prophet said: Seeking permission is three times. If you are given permission then you can, otherwise return. [Muslim] Scholars have advised us that we should also observe this with mobile phones etc. You can try “calling on someone” three times and then leave it insha’Allah.

12. Ahhhhh— big yawn?     The Prophet said: Yawning is from the devil. If one of you yawns let him suppress it as much as possible, as when one of you goes ahhh, the Devil laughs [Al-Bukharee] So no noisy, lazy yawns!

13. Don’t drink like a camel!     The Prophet said: Do not drink in one breath just as the camel does. Rather, drink twice and thrice, and mention (Allah’s) Name before drinking and thank (Him) upon finishing. [At-Tirmidhi] It is recommended to sit down when you drink, take breaks as you drink instead of gulping it down and saying alhamdulillah after!

1.       Write the above 13 sunan in keywords on a paper and focus on them for one week. Take this list with you or hang it up in your house. The key is to keep reminding yourself. You can even put sticky notes next to your bed (“dust off the bed!”), next to your shoes (start right, take off left), on your cupboard (bismillah when undressing), etc!

2.       Send this article to as many people as possible! Either take one sunnah each week and send it to all your friends and family by text, facebook, etc., and make sure you tell them the importance of reviving the sunnah or simply spreading this article to as many as possible. Imagine the great result we can have if we work together spreading this message over the world, insha’Allah!

PS: It’s your mission now to study more ways of the Prophet salallahu ‘alayhi wa sallam and spread them. May Allah ‘azza wajal make us of those who revive the sunnah, ameen!

THE AYAH JOURNAL is dedicated to inspiring you to open the Quran every day, pick one ayah, and apply it to your own life by making acting on that ayah your mission for the day. Let’s bring back the message of the Quran to our daily lives! Check www.ayahjournal.com.