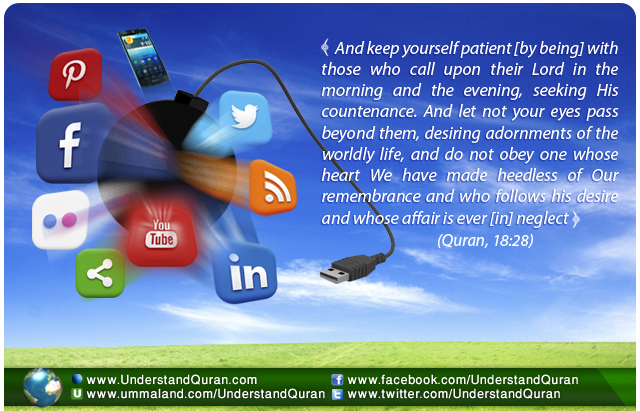 (A note from the Understand Quran team: We are deeply grateful to Allah (swt) that Facebook and other social networks have for us been very effective means of getting the message of the Quran to the entire world, expanding the ummah, and deepening the knowledge of each brother and sister as well as those outside Islam (who we are hoping will join us soon, inshaa Allah). We are also personally grateful that social media helps us to stay connected with our dear ones. The following article addresses the pitfalls of using social media for the strong purposes, and does not mean to suggest that social media is something bad in itself.)

Social media are part of our lives and they are both blessings and tests from Allah ‘azza wa jall.  You might be able to control yourself and use technology to do good deeds, like sharing Islamic knowledge and keeping ties with family, or you might find yourself drifting away from your good intentions and ending up wasting your time, maybe even backbiting.

In this week’s central ayah Allah ‘azza wa jall says: And keep yourself patient [by being] with those who call upon their Lord in the morning and the evening, seeking His countenance. And let not your eyes pass beyond them . . .[Quran, 18:28]

The Prophet salallahu ‘alayhi wa sallam said: It is enough sin for a man to speak of everything that he hears. [Al-Silsilah al-Saheehah] How often do you share people’s statuses expressing their mood or even post about your own fleeting thoughts? Is it of any benefit to yourself or others? Tip: Ask yourself before posting: is this something that will benefit or be of interest to those who read it?

How often do you share someone else’s information without even knowing if it’s really true? O you who believe! If a Faasiq (liar — evil person) comes to you with any news, verify it, lest you should harm people in ignorance, and afterwards you become regretful for what you have done. [Quran, 49:6] The scholars have advised us to verify matters and not to rush to pass on news until we are sure that it is true, even if the news is good news, because if it becomes apparent that the one who passed it on is mistaken, you risk losing your credibility with others.

Lesson 3: Button on, modesty off? Guard your chastity!

If you openly backbite without shame on Facebook or Twitter, or talk about your sins, you are telling the world who you are. Did you know that openly talking about your sin is a sin in itself? Salmaan al-Faarisee radiyallahu ‘anhu said: When Allah wants destruction for a person, he takes shame away (from his heart).

If you were walking outside you wouldn’t just start proclaiming your sins, right? It is all alike [to Him] whether any of you conceals his thought or brings it into the open, and whether he seeks to hide [his evil deeds] under the cover of night or walks [boldly] in the light of day. [Quran, 13:10] Tip: Keep reminding yourself that even though you are behind a computer or phone screen, you are still responsible for what you do.

The Prophet salallahu ‘alayhi wa sallam said: You will be with those whom you love. [Al-Bukhaaree] Be careful with clicking that “like” button, especially when it comes to liking certain brands or certain people who are involved in haraam activities. An extra good or bad effect is that whatever you like ends up in your friends’ newsfeeds, so you might be double-gaining or double-losing by promoting immoral people or ideas.

Lesson 5: Not only good multiplies.

Allah ‘azza wa jall has told us that each good deed shall be multiplied at least ten times, while each sin only once. However, through social media statements, bad words and other wrong deeds can be re-posted and re-tweeted for others to share again and again. Imagine that you posted a backbiting statement and 1000 people like and share it!

The Prophet salallahu ‘alayhi wa sallam said: Verily a person utters a word, that he deems harmless, but it results in his falling into the depths of the Hellfire. [At-Tirmidhee, Ibn Majah] So when you sign out or log off, your wrong action may multiply long after!

The Prophet salallahu  ‘alayhi wa sallam said: Among the most evil of people before Allah on the Day of Resurrection will be a man who is intimate with a woman and she with him, then he spreads her secret. [Muslim] This points out to spreading marital secrets. Another common practice is showing pictures of the gifts your husband gave you, the places you went with your spouse for dinner, etc. Apart from these things being private, it can also incite hasad (envy) from those who are not as happy. This doesn’t mean you can’t share any of your happy moments; just balance the pro’s and con’s.

Every post on Facebook, every tweet on Twitter, and each word on Watsapp becomes a fixed record that will either count for you or against you when you stand for Allah ‘azza wa jall!  You might have security settings, only allowing your friends to see what you post, but the recording angels write down everything! Not a word does he utter but there is a recorder by him, ready (to note it) [Quran, 50:18]

Imagine the day your book of deeds will be presented to you and scrolls of Facebook conversations about nothing, Tweets, and Watsapp messages full of gossip and tale-bearing:  [It will be said], “Read your record. Sufficient is yourself against you this Day as accountant. [Quran, 17:14] Long after you delete your account, your messages and posts will live on in your record of deeds.

It’s easy to get sucked into Facebook and other media. The beautiful central ayah of the week is your homework. Deeply reflect on its advice when you feel tempted to read all those statuses, spend hours on commenting, or even arguing on insignificant matters online and realize what your purpose of this life is: And keep yourself patient [by being] with those who call upon their Lord in the morning and the evening, seeking His countenance. And let not your eyes pass beyond them, desiring adornments of the worldly life, and do not obey one whose heart We have made heedless of Our remembrance and who follows his desire and whose affair is ever [in] neglect. [Quran, 18:28]

Keep fighting temptations and distractions. Stick to the people who strive for Allah ‘azza wa jall, and keep focused on the Hereafter. Why would you even be interested in those who don’t remember Allah?

THE AYAH JOURNAL is dedicated to inspiring you to open the Quran every day, pick one ayah, and apply it to your own life by making acting on that ayah your mission for the day. Let’s bring back the message of the Quran to our daily lives! Check www.ayahjourn al.com.