In the Shade of the Throne 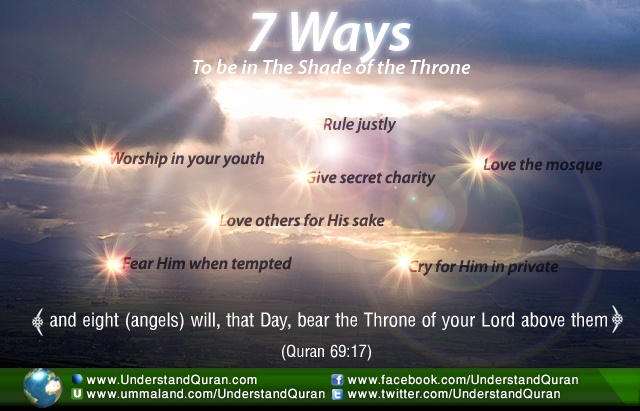 Seven groups of people will receive an enormous reward for the small acts of worship they did in this life; these people will be in comfort on the hardest day ever, while others are anxiously sweating in the heat of the low-hanging sun.

In this week’s Jumuah Special you’ll find seven productivity tips on how to be inspired by those who’ll be in the shade of the throne on the Day of Judgement. Let’s learn about their characteristics and apply them in our daily lives, insha’Allah!

In this week’s central ayah Allah, the Lord of the Throne, says: and eight (angels) will, that Day, bear the Throne of your Lord above them. [Quran, 69:17]

A hadith packed with productivity advice

Allah ‘azza wajal blesses you in ways you see and don’t see, by protecting you from things you do not even know of and by teaching you ways how to avoid His wrath.  There’s a hadith which mesmerized me since I first read it and since then I’m praying I can gain these characteristics and the huge reward following, which is being in the shade of the Supreme Throne of Allah.

The Prophet salallahu ‘alayhi wa sallam said: Allah will give shade to seven on the Day when there will be no shade but His.  A just ruler; a youth who grew up in the worship of Allah, the Mighty and Majestic; a man whose heart is attached to the mosques; two men who love each other for Allah’s sake, meeting for that and parting upon that; a man who is called by a woman of beauty and position [for illegal intercourse], but he says: ‘I fear Allah’, a man who gives in charity and hides it, such that his left hand does not know what his right hand gives in charity; and a man who remembered Allah in private and so his eyes shed tears. [Al-Bukhaaree, Muslim]

Let’s translate each of the seven to a practical tip to apply to your daily life:

1. Rule justly. You are probably not ruling a country, but you most likely have authority in some kind of way over others, like your spouse, your children, or even at work or in a group you volunteer for. Keep reminding yourself to be just, even in the smallest matters. It’s easy to look down, fall out or take advantage of someone in a ‘lower’ position than you, don’t let shaytan trick you into it.  An example is taking anger out on your children.

Action: Ask Allah ‘azza wajal to guide you in dealing justly with others, even when you don’t like them. Next  time when you showed ‘oppressive’ behavior, immediately repent sincerely, say ‘astaghfirullah’ and apologize to the person.

Motivation: Allah Al-Hakeem, The All-Wise, says: do not let hatred cause you to act unjustly, that is nearer to piety. [Quran, 5:8]

2.Worship in your youth. How many say: I will wear hijab or I will start praying when I’m older? The media tempts you saying: You are only young once! This is the phase of your life in which shaytan works hardest to transform your energy for action into bad deeds.

Action: Get into action for the Deen! Tell yourself that from now you will at least spend one hour a week on a good deed for others, no excuse policy. Look locally where help is needed,  whether it is getting groceries for someone in need, offer others a ride to a lecture, writing a letter to a Muslim prisoner, you name it.

Motivation: Take advantage of five matters before five other matters: your youthbefore you become old..[part of the hadith,  Ahmad]

3. Love the mosque. Is the masjid a place your turn up just for taraweeh in Ramadan, do you feel like a ‘visitor’ when you go to the mosque? It’s time to realize and teach our children to feel responsible for your local mosque!

Action: Next time you go the mosque, tidy up any wrappers etc you see and put all the Qurans and books nicely in the cupboard, if you have children, do it all together.

Motivation: The Prophet salallahu ‘alayhi wa sallam said: Whosoever removes adhaa (anything repulsive or harmful) from the masjid, Allah will make a house for him in Jannah. (Ibn majah) another beautiful narration is when the Prophet insisted in praying the funeral prayer of a woman who used to sweep the masjid!

4. Love others for His sake. Is there anyone in your life now you just love for their emaan? Loving another for His sake and not because they look good or benefit you in material things is the most productive love, because it brings you many rewards!

Action: send out a text, watsapp or even facebook message to all those you love for their emaan, and simply say: I love you for the sake of Allah (uhibuk fillaah)!

Motivation: A man was passing by and a man sitting with the Prophet said, ‘O Messenger of Allah, I love this man.’ The Messenger of Allah said to him, ‘Have you informed him?’ He said, ‘No.’ He said, ‘Inform him,’ so he caught up with him and said, ‘I love you for the sake of Allah.’ He said, ‘May the One for whom you love me [Allah] love you (ahabbakalladhi ahbabtani lahu) [Sunan Abi Dawud]

5. Fear Him when tempted. Especially in these times of social media it becomes easy for brothers to approach sisters and vice versa to whom they wouldn’t have access to in real life.

Action: when you get a message or are approached and feel tempted, say ‘I fear Allah’ (both men and women!), also say ‘a’oodhu billaahi minash-shaytaanir-rajeem’ when you feel tempted in approaching someone else the wrong way.

Motivation: And as for him who feared standing before his Lord and restrained himself from impure evil desires, verily Paradise will be his abode. [Quran, 79:40-41].

6. Give secret charity. Sometimes it’s good to give charity in public, for example to motivate others to give too. However, there’s a special sweetness you feel when you give charity in complete privacy.

Action: once a week give something in charity, whether it is money or your time, without anyone knowing. Absolutely no one. Every week change the cause.

Motivation: If you disclose your charitable expenditures, they are good; but if you conceal them and give them to the poor, it is better for you, and He will remove from you some of your misdeeds . And Allah , with what you do, is Acquainted. [Quran, 2:271]

7. Cry for Him in private. When was the last time you sat alone and cried for your sins, your blessings, your love and your fear for Allah?

Action:  At least once a week, at night, take ten minutes to close your eyes and to turn to Allah ‘azza wajal. Think about His Greatness, how He blessed you that week, the sins you committed that week and open your heart. Do this for 30 days and then increase these ‘self-reflection’ sessions until you can do this every night.

Motivation: The Prophet salallahu ‘alayhi wa sallam said: Two eyes will not be touched by the fire, an eye that cried from the fear of Allah, and an eye that stayed awake guarding for the sake of Allah [At-Tirmidhi]

Homework:
Now back to the central ayah and the ‘arsh of Allah; there’s a beautiful dua the Prophet salallahu ‘alayhi wa sallam instructs you to make: If you ask Allah, then ask him the Firdaws (the Highest Jannah), for it is in the middle highest point of Paradise, and above it is the Throne of the Most Merciful, and from it burst the rivers of Paradise. [Al-Bukhaaree, Ibn Majah]
So if you ask, ask for the best!