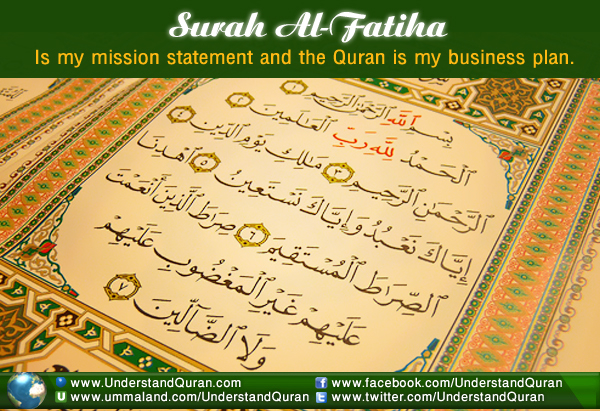 In the name of Allah (swt), the Most Gracious, the Most Merciful

Guiding Mankind To Achieve “Taqwa” (Righteousness In This World)

As mentioned earlier (in Part 1), the Quran’s opening chapter, Surah Fatiha, is our mission statement, the statement by which we live and mold our lives, and the Holy Quran is our business plan. That being so, the life of our prophet (saws) is the implementation of this business plan; his life represents that plan in action.

In Quran 5:15-16, Allah (swt) says, O People of the Scripture, there has come to you Our Messenger making clear to you much of what you used to conceal of the Scripture and overlooking much. There has come to you from Allah a light and a clear Book. By which Allah guides those who pursue His pleasure to the ways of peace and brings them out from darknesses into the light, by His permission, and guides them to a straight path. [Quran, 5:15].

There shall be no compulsion in [acceptance of] the religion. The right course has become clear from the wrong. So whoever disbelieves in Taghut and believes in Allah has grasped the most trustworthy handhold with no break in it.  And Allah is Hearing and Knowing. [Quran, 2: 256]

When warning us against shirk, Allah (swt) says: Indeed, Allah does not forgive association with Him, but He forgives what is less than that for whom He wills. And he who associates others with Allah has certainly gone far astray. [Quran, 4:116]

But, as He says, Except for those who repent and correct themselves and make evident [what they concealed]. Those – I will accept their repentance, and I am the Accepting of repentance, the Merciful. [Quran: 2:160]

Rewards For the Saleheen/Al-Abrar (Righteous Ones) in Paradise

The word “Paradise” (Jannat-ul-Firdose), its attributes, and the rewards to the muttaqeen have been cited 243 times in  various verses in the Holy Quran. The righteous ones (Al-Abrar) will be welcomed with these words: Are these the ones whom you [inhabitants of Hell] swore that Allah would never offer them mercy? Enter Paradise, [O People of the Elevations]. No fear will there be concerning you, nor will you grieve. [Quran, 7:49].

Allah (swt) clarifies further, that, He has certainly succeeded who purifies himself And mentions the name of his Lord and prays. But you prefer the worldly life, While the Hereafter is better and more enduring. [Quran, 87: 14-17]

Surah Ar-Rahman provides a vivid description of Paradise and the various rewards Allah (swt) has prepared for the muttaqeen.  The description is beyond human comprehension.   Although to our simple minds it sounds clear, still we can’t comprehend the magnanimity of Allah (swt) in rewarding the saleheen, the righteous ones.

Allah (swt) also asks a rhetorical question several times in this Surah, addressing the jinn and mankind: Indeed, they who have believed and done righteous deeds and humbled themselves to their Lord – those are the companions of Paradise; they will abide eternally therein. [Quran, 11:23]

He also describes: Say, “Shall I inform you of [something] better than that? For those who fear Allah will be gardens in the presence of their Lord beneath which rivers flow, wherein they abide eternally, and purified spouses and approval from Allah . And Allah is Seeing of [His] servants – [Quran; 3, 15]

Their thirst will be quenched with the choicest drink, sealed with musk; the drink shall have a mixture of  Tasneem, a spring at which those nearest to Allah (swt) will drink.

It is humanly impossible to describe eloquently the rewards Allah (swt) has reserved for the saleheen in Junnah.  Further, the muttaqeen will also have the special privilege of receiving a drink from the fountain of Kauther from our beloved prophet (saws) on the Day of Judgement.

Retributions to the Unbelievers in Hell

The description of Hell and the retribution to its residents have been cited 264 times in the Holy Quran.  As Allah (swt) delineates: And whoever disobeys Allah and His Messenger and transgresses His limits— He will put him into the Fire to abide eternally therein, and he will have a humiliating punishment. [Quran, 4:14]

Satan promises them and arouses desire in them. But Satan does not promise them except delusion. [Quran, 4:120]  Allah (swt) further advises: Call upon your Lord in humility and privately; indeed, He does not like transgressors. [Quran, 7:55]

Before I conclude, my humble supplication to Allah (swt) is this: Grant us forgiveness, O our Rabb; to You we shall return. Pardon us, forgive us, and have mercy on us. You are our protector. Help us against the unbelievers. Ameen.