Reflecting on the Blessings of Summer: Five Ways a Day in the Park Can Boost Your Faith 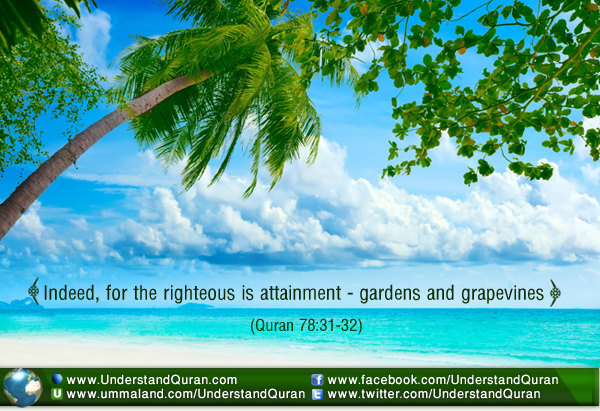 Do you remember that in one of the first weekly Jumuah specials we got to know the sabiqoon? They’re the ones first and foremost in doing good deeds. You could call them the top-rank believers— the first and the fastest in the race to Paradise. Let’s take your daily-life situations to the next level and use them to remind yourself of some crucial lessons and of your goal to be of the sabiqoon!

It was a warm day, an ideal day to go to the park. When I looked around me I saw women in summer dresses, laughing loudly, lovers sitting on benches in the shade of blossoming trees, and the sun shining through the clouds.
Have you ever noticed how at some times in your life you seem to “loosen up” and leave aside the remembrance Allah (swt), the Most Merciful, the One who gave you all?

The question is this: how can you benefit from summer and race towards Paradise?

It is as Allah azza wa jal promises us in this week’s central ayah: Indeed, for the righteous is attainment— Gardens and grapevines. [Quran, 78:31-32]

1. Summer dresses versus the fear of kufr: As you look around you outside and see the people who forget about Allah, one of the most helpful things you should follow in this life full of fitan (trials and temptations) and disasters is to ask Allah earnestly to help you remain steadfast in your religion.

It isn’t guaranteed you’ll die as a Muslim; imagine dying as a non-Muslim and being in the fire forever with no chance of ever coming out and tasting the beauty of Jannah.

Abdullah bin ‘Amr bin al-‘Aas said that he heard Allah’s Messenger saying, All the hearts of the offspring of Aadam are between two fingers of Ar-Rehman’s Fingers, as one heart. He turns it (in any direction) as He wills. Then Allaah’s Messenger said, “O Allaah! The Turner of the hearts, turn our heart towards Your obedience.” [Saheeh Muslim]

Action point: Your faith, your emaan, is the most precious possession you have. Thank Allah every day that you’re a Muslim! Imam Ahmad reported that the Prophet used to say this dua frequently (so memorize it and use it!) :  Yaa muqallibal quluub, thabbit qalbee ‘alaa deenik – “O Turner of the hearts, keep me steadfast in your religion.”

2. Sunshine versus the fear of death: Think about how the sun changes, one moment its rays light and warm and the next moment disappearing behind a cloud and changing the whole atmosphere. How will you feel when the time comes for you to be buried and you’re lifted onto people’s shoulders? Do you ever think about this day?

On the authority of Abu sa’eed al khudri the Prophet said: When the deceased one is ready for burial and the people lift it on their shoulders then if the deceased is a righteous person he will say: ‘Take me ahead!’  and if he is not a righteous one then he will say ‘woe to me! Where are you taking me?’ And his voice will be audible to everything except human beings; and if they heard it they would fall down unconscious. [Saheeh Bukhaaree, Ahmad]

The body is made of the material of this lower world and so you’ll have to leave it here, in this world where you need to eat, sleep, bleed, and cry. The soul is of the higher world and has only one need: to be with Allah.

Action point: Read and memorize this ayah, in which Allah calls back the righteous soul with the eye-watering words:  O (thou) soul, in (complete) rest and satisfaction! Come back thou to thy Lord – well pleased (thyself), and well-pleasing unto Him! Enter thou, then, among My devotees! Yea, enter thou My Heaven! [Quran 89:27-30 ]

3. Loosening up versus the fear of minor sins: As the weather is nice and people are happy and busy enjoying themselves, remind yourself that a true believer is one who fears to commit minor sins as much as she fears to commit major sins!

The Prophet advised Mu’adh: Fear Allah wherever you are and follow up a mistake with kindness for it will erase it and deal with people with good manners. [Sunan al-Tirmidhee]

Action point: When you commit a bad deed, follow it up with as many good deeds as you can, give sadaqah, take a meal to someone, help someone out, pray an extra salah, listen to an extra lecture; don’t let Shaytan trick you and remain stuck in the vicious circle of guilt. Get up and do good deeds straight after!

Ibn Katheer said in this tafseer that a single fruit will have 70 kinds of taste and colour that resemble one another! And have you heard of Tooba? This is a huge tree that produces the fabric for the clothing of the people of Paradise.

The Messenger of Allah said, Tooba is a tree in Paradise, as big as a hundred year’s journey; the clothes of the people of Paradise comes from its calyces [the outer parts of its flowers]. [Silsilat al-Hadith as-Saheehah] Can you imagine the size?
And he said: Then I was taken up until I reached Sidrat al-Muntaha and I saw its Nabq [fruits] which looked like the clay jugs of Hajar, its leaves were like the ears of elephants, and one of these leaves could cover the whole of this ummah. It was veiled in colours indescribable. Then I entered Paradise, and its lights were pearls and its soil was musk. [Saheeh Bukhaaree and Muslim]

He also said: There is no tree in Paradise that does not have a trunk made of gold. [Ibn Hibbaan, at-Tirmidhee]

Action point:  Every spare moment, when you’re on the bus, doing work in the house, attending children, or sitting in the office, say subhaanAllah, al-Hamdulillah and Allahu akbar and build your real estate in Jannah!

Ibraaheem  ‘alayhissalam asked our Prophet Muhammad (saw) on the night of the Israa’ to convey his greetings to this ummah and to tell them the way in which they could increase their share of the trees of Paradise. The Messenger of Allah said:  I met Ibraaheem . . .and he said, ‘O Muhammad, tell your ummah that Paradise is a land whose soil is good and its water is sweet. It is an empty plain, which will be planted with SubhaanAllah, al-Hamdulillaah, and Allahu Akbar. [At-Tirmidhee]

5. A picnic in the sun with your loved ones versus those alone in the dark: While enjoying a day in the park, have you ever thought about those who haven’t felt the sunshine for years? There are our brothers and sisters who are imprisoned and are alone sitting between four closed walls and they have no one to talk to, separated from their families and children and at times abused and tortured or killed.

When it comes to giving sadaqah we always think about the needy and the orphans but where are the prisoners on your list? As Allah says: And feed with food the needy wretch, the orphan and the prisoner, for love of Him. [Quran, 76:8]

Action point: I urge myself and all of you to write at least one letter to a prisoner before Ramadhaan and see what it does to your emaan and theirs!

Tip: go to www.muslimprisoners.com to send a letter (super-simple by email!). To learn about the prisoners sign up for the newsletter of www.cageprisoners.com. Don’t forget to make dua each day for your imprisoned brothers, sisters, and even children to grant them sabr, speed up their release, and ease their pain.

May Allah ‘azza wa jal aid us to complete these five action points for His sake only and attain His beautiful pleasure and may He reunite us in the highest paradise, ameen.