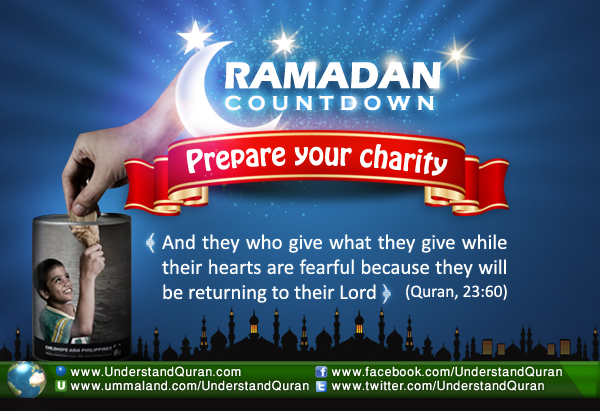 Imagine yourself when the adhan of Maghrib comes in and Ramadan has started. From day one your mind is set on this new daily routine of fasting, preparing for iftar, going to taraweeh, trying to pray your five prayers on time, and reading as much Quran as possible. You’re also trying very hard not to swear, gossip, or get angry. But there’s one major thing missing in this picture: your charity.

Ibn ‘Abbas narrated: The Prophet salallahu ‘alayhi wa sallam was the most generous person, and he used to become more so (generous) particularly in the month of Ramadan . . . more generous than the fast wind in doing good. [Al-Bukharee]

Let’s discover how you can focus on your sadaqah before Ramadan and make a plan as to how to accelerate your giving during that month when our rewards are multiplied by the number that only Allah knows and wills!

And they who give what they give while their hearts are fearful because they will be returning to their Lord— [Quran, 23:60]

What happens a lot – at least to me – is that we have so many things we would like to study, so many ideas of what we want to do in Ramadan and we end up with a “full” head and might even find our eman decreasing because we can’t manage to do everything.

You’ll be amazed at how much you can actually achieve— Allah subhanahu wa ta’ala placed so much barakah in our time in Ramadan. All you have to do is ask Him to help you to prepare in the best way and to pick the best goals. So start with a sincere dua’ to help you prepare mentally and physically.

In the sea of Ramadan preparation tips– from getting into the habit of praying the sunnah prayers to forgiving others– one of the best tips I’ve found is focusing on charity before Ramadan.

1). Think about your charity.

What is sadaqah? Sadaqah (plural— sadaqaat) is a voluntary giving; you’re not obliged to give it, but you do so because you love Allah (swt) and you want to do good to His creation.

Do you know that you have the responsibility to think about your charity and to actively look for people in need? Charity is not just about money— it’s also thinking about how you, with your skills, position, and provisions can give and do charity in the way most pleasing to Allah.

Assignment: Make a charity list. Think now about which charities are best for you to support, and get a list ready so you can easily spend on them in Ramadan. Think creatively. Why not gift a course to a friend to help them learn the Quran? You could even keep aside a certain amount to gift 10 friends with a Quran course. Imagine the rewards of leading someone to good, being part of conveying ayaat of the Quran to others and insha’Allah getting rewards for each letter of the Quran they will read after that!

Don’t only think about the money you’ll spend but also about how you’ll give sadaqah by your time and skills so that you can gain rewards in all areas. Read up on sadaqah jariyah, the ongoing charity. As the Prophet said: When a man dies, his deeds come to an end except for three things: sadaqah jariyah (such as a well of clean water, planting a tree, masjid, hospital) knowledge which is beneficial, or a virtuous descendant who prays for him (the deceased). [Muslim] Planning in these acts– for example a tree-planting project with children, takes time, so you can plan it before Ramadan!

Assignment: Start a personal Ramadan project. This year I would love to inspire each one of you to have your own Ramadan project. What is a Ramadan Project? You can compile your own booklet with simple but virtuous deeds, print it, and hand it out so others can practice these deeds in Ramadan. Imagine the rewards!

You can even invest in printing the booklet and then selling it to others and giving all the proceeds to charity! In this way you can give away a big amount in charity, while you only started with a little.

Be creative. Involve the children. Make Eid cards and sell them for charity. Start a page online and bring people together to serve a charity cause, for example a Buy-and-Sell platform online on which you encourage people to upload items they don’t use or want anymore so others can buy them and have all the proceeds go to charity. Imagine bringing all these people together to join in good deeds!

Giving From Your Heart

Back to the central ayah: . . . while their hearts are fearful because they will be returning to their Lord— what is the state of your heart when you give? This Ramadan think about how your charity is supposed to transform you, not only the lives of those you give to by simply clicking a mouse and transferring your money abroad. Reconnect to Allah while thinking about your charity so you can really feel the effect on your heart when you increase your giving in Ramadan.

Your Journey to the Gates of Paradise

Abu Bakr, radiyallahu ‘anhu, with his beautiful character and zeal, had a question: Let my parents be sacrificed for you, Oh Allah’s Apostle! No distress or need will befall him who will be called from those gates Will there by anyone who will be called from these gates? The Prophet replied, Yes. And I hope you will be one of them.  [Al-Bukaree] May we be of those called from all the gates of Paradise, including the gate of charity, ameen!

PS: If anyone would like to inspire others with examples of Ramadan projects please feel free to post below. Imagine the rewards if others do these deeds of charity because they read your example insha’Allah!

THE AYAH JOURNAL, Qur’an & Productivity is a global project with the exciting goal to inspire every Muslim worldwide to open the Qur’an every day, pick one ayah, and apply it to your own life by making acting on the ayah your mission for the day. Let’s bring back the message of the Qur’an to our daily lives! Check www.ayahjournal.com and follow us on www.facebook.com/ayahjournal for vibrant Qur’an and productivity tips.