RAMADAN COUNTDOWN: Prepare with the Quran! 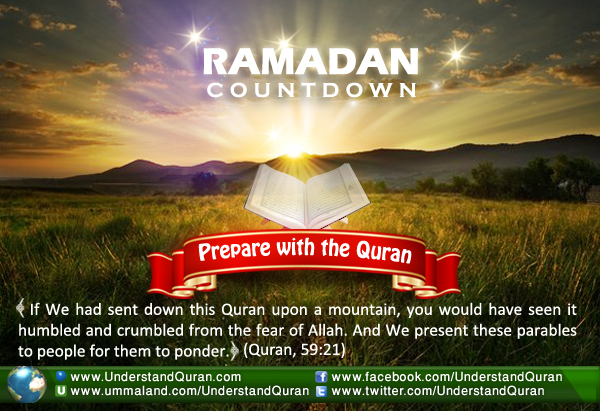 “Reading the Quran at least once in Arabic, together with the translation . . .”

“Completing my recitation of the whole Quran, with correct tajweed . . .”

Many of us are setting Quran goals for Ramadan, and often these goals are based on numbers.

Quantity is fine, but what about quality? What are all your completed recitations worth if they don’t affect your heart?

And how can you help yourself to feel the full effect of the Quran?

Allah the Almighty makes one of the most powerful statements  in this week’s central ayah: If We had sent down this Qur’an upon a mountain, you would have seen it humbled and crumbled from the fear of Allah. And We present these parables to people for them to ponder. [Quran, 59:21]

How much do you really know about the most important book in your life? Do you know why the book of Allah is called the “Quran?” And what does it actually mean? Among all the different names given to the book of Allah, “the Quran” (Al-Quran) is the most common and famous one and it is a name that Allah Himself gave to His book.

From the first years of the wahy (revelation) to the Prophet salallahu ‘alayhi wa sallam it was called the Quran by the revelation itself. The term is repeated 68 times in the Quran and except on two occasions [Quran, 17:78] it means the Holy Quran or part of it.

According to the strongest opinion the word “Quran” is derived from Qara which means to recite, and Al-Quran means the recitation. Why is it called the recitation?

What does the Quran have to do with Ramadan? Ramadan was the month in which the Quran was revealed.

(These five points are based on those found in an article called “Carry the Flag” by brother Tareq Mehanna, now imprisoned in the United States. His blog is well worth reading! Please pray for brother Tareq and other imprisoned brothers and sisters.)

1). Ponder how the Quran could affect a mountain.
If We had sent down this Qur’an upon a mountain . . .  Ash-Shawkani explained that this is . . . because of its importance, its greatness, its eloquence, its strength of expression, and the lessons it contains that soften hearts. Because of all this, were it to have been sent down upon any of the mountains on Earth, you would have seen that mountain— no matter how solid and massive— crumbling to pieces from humility before Allah, from caution of His punishment, and from fear that it would not be able to give due respect to His Words. So, with this vision and parable, one grasps the loftiness of the Quran and how deeply it affects the heart.

Tariq Mehanna, an imprisoned Muslim brother— may Allah speed  his release and that of all the prisoners– beautifully noted:  “If this is how a solid, hulking, inanimate mountain would be changed by the Quran, imagine its potential in changing your tender, living heart and soul!”

2). Ponder how it physically affected the one upon whom it was sent.
Can you imagine the psychical intensity the Prophet endured just to receive the Quran? The squeeze of Jibraeel ‘alayhi sallam seconds before the very first ayaat of the Quran were revealed in the cave of Hira, the revelation which came to the Prophet like the ringing of a bell, which he described as most difficult, the sweat dripping from his forehead on a very cold day, the Prophet endured great difficulty while receiving the revelation.

3) Ponder how a book was designed to affect the entire planet.
The Quran is so powerful and touching that one after another it brought together those who were sincere to join them under the flag of the messenger. As Tariq Mehanna said: “This is the Book which inspired a great movement which began with the preaching of a message by an individual and changed the planet.”

Know that this change begins in yourself. Al-Fudayl bin ‘Iyad said: “The memorizer of the Quran carries the flag of Islam. He shouldn’t waste his time in vain amusement, distractions, and pointless matters with those who do so, out of respect for the Quran.”

4). Ponder the characters in the Quran.
You’ll find the Quran telling the story of today’s world— your story. You’ll come across many different personalities and their characteristics, from the very best to the worst of people. Ask yourself: which of these people do I want to be?

5). Ponder how the Quran nourishes you.
The most beautiful point I found which brother Tariq made was: “. . . the fact that during your days in Ramadan, you basically replace one form of nourishment for another: you are prohibited from food and drink at the same time that you are pushed to delve deeper into the Quran. Think about the wisdom in this. The point is for you to confirm for yourself that your body can survive even on a minimal amount of food & drink, and that the source of true life – the nourishment you cannot do without – is found only in the Quran.”

Go to the resource section and benefit! Print off the Quran dictionaries and each day carry the vocabulary of one juz with you during the day combined with thes surah contents of that juz. This way you will gain a great overview of the meanings and message of each juz of the whole Quran in shaa Allah!

Read up on which surahs the Prophet salallahu alayhi wa sallam used to recite each day and write them out on a poster to hang up so you do not forget. Eg Surah al Mulk and Surah As-Sajda before going to sleep, the last ten ayaat of Surah Ale ‘Imraan when you wake up etc.

Homework
Before your start with your Quran goals, call out to your Lord with a beautiful dua which includes your relationship with the Quran, about which the Prophet said: . . . whoever hears them ( these words) should learn them.

O Allah, I am your slave, the son of your slave. My forelock is in Your Hand. Your judgment of me is inescapable. Your trial of me is just. I am invoking You by all the names that You call Yourself, that You have taught to anyone in Your creation, that You have mentioned in Your Book, or that You have kept unknown. Let the Qur’an be delight of my heart, the light of my chest, the remover of my sadness and the pacifier of my worries. [Musnad Ahmad]

PS: If you want to share your Quran study-tips and gain rewards if people practice them in shaa Allah, please go ahead and leave a reply below!

THE AYAH JOURNAL, Qur’an & Productivity is a global project with the exciting goal to inspire every Muslim worldwide to open the Qur’an every day, pick one ayah, and apply it to your own life by making acting on the ayah your mission for the day. Let’s bring back the message of the Qur’an to our daily lives! Check www.ayahjournal.com and follow us on www.facebook.com/ayahjournal for vibrant Qur’an and productivity tips.