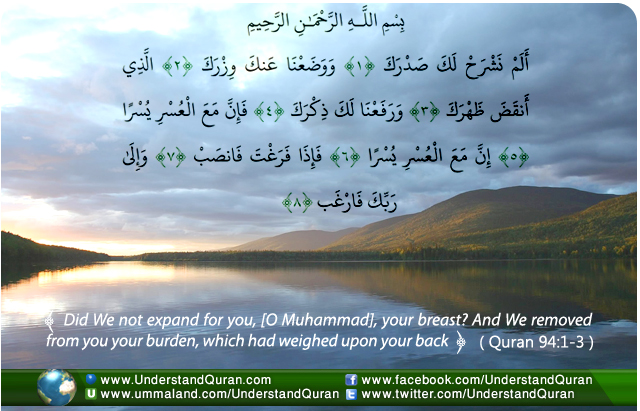 (Read the first part of this article here.)

In the first part of this article, “The Quranic Anti-Depressant,”  we talked about how Allah (swt) channels our thinking patterns, making us look more at the realities of life and our many blessings and helping us ease our depressive feelings. That article was based on Surah Duha from the Quran.

In this article we’ll look at not only how to allay the pain of depression, but also how to take it forward, turning from depression to a motivation to do good and to become successful in both this world and the next.

The last Surah ended with the command from Allah (swt) to be active in the social sphere, helping the poor, the needy, and the weak, and this is an important bit of advice that many counselors give to patients suffering from depression— help someone else. It’s a lesson in gratitude and a reminder of our many blessings.

Aptly enough, the last verse of Surah Duha commands to declare and proclaim the blessings that Allah (swt) has bestowed on us. Counting blessings and being grateful are usually the first and most important activities mentioned in self-help books and by counselors who treat patients with depression.

After commanding us to proclaim the blessings of Allah, in the next Surah, Inshirah, Allah declares, Did We not expand for you, your chest? [Quran, 94:1] The greatest blessing, the blessing of guidance, is Islam. The greatest gift that  from Allah (swt) is that He has guided us, and shown us the path to Islam, opening our chests so that we may receive guidance, and be among those who are given the tawfeeq (ability) to accept it.

That is why, in Surah Rahman, Allah says, The Most Merciful, Who has taught the Quran, Created man. [Quran, 55:1-3]. Scholars say that Allah mentions teaching the Quran before the creation of man, because the fact that Allah has taught His Quran, His own word, to be recited onto mankind, is a greater blessing, a greater act of mercy than our very creation.

The next time you feel down, know and remember that you are a muslim who has been guided by the One who created the universe and everything in it. Know that you have the Quran in your house and can read it, ponder it, and recite it.

Allah (swt) has kept His Words in the hearts of Muslims, and you are one of them. Allahu Akbar, Allah (swt) is greater— than what? Than everything and anything else. Whatever our problem, Allah (swt) is above and beyond that. When your problems, your sadness, your depression puts you down and almost out, remember Allah (swt) the One who is greater than all, has guided you and me— He surely will guide us out of it.

The Fruits of the Blessing

Allah (swt) continues in the Surah, And removed from you, your burden, which had weighed down upon your back. [Quran 94:2-3]. Part of the fruits of guidance is that all that was done before is forgiven and removed, and that we start with a clean slate.

Many of us were non-Muslims buried in the depths of disbelief and polytheism until Allah (swt) guided us to Islam. Others of us were born into Muslim families and lost our Islam, and Allah (swt), out of His immense mercy, guided us back from the darkness into light.

Others among us were Muslims who were casual about the faith until Allah (swt) guided us, and we’re now more focused on earning the pleasure of Allah (swt). Whatever may be our background, the day we took the decision to turn back to Allah (swt) and mend our ways  was the day Allah (swt) opened our chests and removed our sins and burdens.

Thus many of us can relate to the feeling of “a weight lifted off my back” after the time they chose to put Allah (swt) over everything else. All praise and thanks are due to Allah (swt) for that He mentions, And We have raised high your mention. [Quran, 94:4].

The Prophet (sallallaahu ’alayhi wa sallam) said, When Allah loves a slave, calls out Jibril and says: ‘I love so-and-so; so love him.’ Then Jibril loves him. After that he (Jibril) announces to the inhabitants of heavens that Allah loves so-and-so; so love him; and the inhabitants of the heavens (the angels) also love him and then make people on earth love him. [reported by Bukhari and Muslim]

The Messenger of Allah also said, Allah Almighty says, ‘I am in My slave’s opinion of Me and I am with Him when He remembers Me. When he remembers Me in himself, I mention him in Myself. If he mentions Me in an assembly, I mention him in a better assembly than them.’ If he comes near Me by a handspan, I come near him a cubit. If he comes near Me by a cubit, I come near a fathom. When he comes to walking, I come to him running. [reported by Bukhari and Muslim].

Coming from the darkness to light, from disbelief to Islam, from heedlessness of Allah (swt) to the remembrance of Him, our names are honoured and raised. Many a times it is in the earth itself that we are honoured by people knowing us as religious and God-fearing individuals.

Moreover, in the hereafter, Allah (swt) will honour us, and our names will be among those which are called out for paradise, provided we follow Islam and earn the mercy of Allah (swt), in shaa Allah. May Allah (swt) make us among those who are not only blessed with Islam, but of those who also receive the fruits of its blessings and are blessed to be steadfast on the way.

Moreover, there is a bit more nuance in these two verses of the Quran. Allah says that with the difficulty (AL-usri), comes a ease (yusra, as opposed to al-yusra). He also repeats it twice, meaning that with each difficulty there comes two eases, before it and after it.

What is the proof for that? Didn’t he expand your chest for you? And remove the burden off your back? And then raise high your name and reputation? Isn’t that the merciful Lord whom we have turned to? If we believe in that, then how can we lose hope?

The Way out of the Difficulties

Allah (swt) mentioned at the end of the last Surah to get active in the community— help the orphan, feed the poor, don’t return anyone empty-handed and also declare His blessings upon us. Now, Allah (swt) gives another way out.

When you’re done with work, when you’re done with helping the people, giving dawah, and declaring your blessings, turn to your lord. Pray to Him, make lots of dua to Him, long for His companionship, and pour out your feelings and troubles and complaints to Him.

He is As-Samee, the One who Hears, and Al-Saboor, the One who is patient with you and your troubles. He will listen to you, and never leave you empty-handed. Turn to Allah(swt), and know that He alone can bring you out from trouble to solution. Allahu akbar, Allah is greater than all our problems and wishes.

We end with a hadith of the Prophet sallallahu alayhi wasallam:

Verily your Lord is the One modest and Generous, and when His servant raises his hands to Him in supplication, He is shy from returning them empty. [reported by at-Tirmidhi]