The Purpose of Death and Life 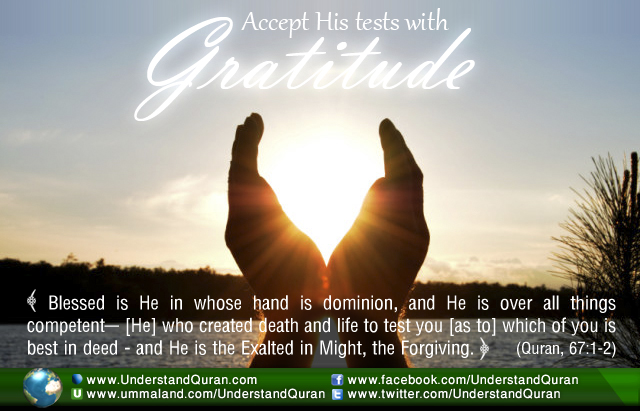 The word tabaraka is the superlative form of barkat, which captures numerous meanings in the English language: exaltation and greatness, abundance and sufficiency, eternalness and diversity of virtues and distinctions.  When the superlative, tabaraka is reflected, it conveys the meaning that Allâh (swt) is infinitely superior to all things except Himself in terms of his essence, attributes and abilities, and the His qualities are ever-enduring.  Because the word al-Mulk is used definitively rather than in a limited application, it conveys the concept of absolute sovereignty over the universe in its entirety, and that He possesses unconditional supremacy of command, which is shared with no one else, nor can anyone else prevent His exercise of command.

Free Will— a Test

By being given limited free will, mankind is empowered to do good or evil.  His life is not purposeless, and the purpose of his life is to test what category of individual he is.  Since Allâh (swt) has structured the test, and since He is Supreme in Command, He will determine the results of the test.  Therefore, it is the responsibility of mankind to understand the standards for good and evil as established by Allâh (swt).  And Allâh (swt) is absolutely fair.  He sends His Books and His Messengers to convey these standards to mankind.

Allâh (swt) conveys the thought at numerous times in the Holy Qur’an that the best of deeds are those that are performed for the sake of Allâh (swt) and in the manner announced by the Prophet Muhammad (saws).  The test that Allâh (swt) conducts begins when life is granted and ends when death occurs. A test implies accountability, without which a test is meaningless.  By stating the He is “All-Mighty, Oft-Forgiving,” Allâh (swt) conveys that He will apply the reward or the punishment, and that He is the One “in Whose Hand is the dominion;” He conveys that this reward or punishment will occur in both this life and the afterlife.

The Thing We Were Made For

Being created to undergo a test demonstrates the real position of mankind in relation to the world, as well as the relation of the world to mankind.  It distinguishes mankind from all other objects of creation (animals and vegetable matter), whose purpose in life ends with their death or completion of usefulness.  An individual’s age is a measure of the time that he or she has been given to participate in the test.  Whatever powers and abilities the individual has been granted, the people, places, and things that have been positioned under the individual’s authority, the numerous positions in which the individual functions are measures of the test, which continues until death occurs.  It is in the afterlife, when all individuals are read their records, that the result of the test is announced: Jinnah or Jahannam.  And the individual’s reward or punishment will be based on the category of individual that he or she establishes though their deeds.

Profession of Faith Not Enough

Do people think that they will be left alone because they say:  “We believe,” and will not be tested?   [Surah Al-Ankabut, Ayah 2]

Just to profess faith is not sufficient.  It must be tried and tested in real life situations.  The tests will take place under a variety of circumstances in the individual’s personal life as well as in her or his relationship to the environment.  The individual will encounter sadness and disappointment, as well as suffering and must be prepared for self-sacrifice.  Even the wrong that people may do to us is a part of the test.

We are here on this earth for a test. Allah (swt) wants to make us reveal whether we would worship Him or not, whether we would serve Him or not.  We have to remember and act upon the fact that every moment of our life is a test, an examination of the manner in which we fulfill the purpose of our existence.  Our performance on this test is what will decide if our ultimate destiny is eternal torment or eternal peace and bliss.

Allâh (swt) has granted us control over our intentions as part of the test that He has given us.  Allâh (swt) is All-Knowing.  He doesn’t need the results of a test to increase His own knowledge.  The test is for our use, our improvement, to burn out the impurities within ourselves, to mold our wills, and to purify us.  Our performance on the test is based on the relationship with Him that we choose to have.  The first stage of the test is to see if you accept the Prophet Muhammad (saws). The second stage is to see if you live in accordance with the law he brought.

When Things Go Wrong, it’s Not a Punishment

The individual is tested with circumstances that are favorable to her or him, as well as situations that are unfavorable.  It is a total misreading of the facts of life to consider that which is favorable an indication of the pleasure of Allah (swt) or that which is unfavorable an indication of His displeasure.  It is one’s reaction to the test that pleases or displeases Allah (swt).  The test will determine whether or not we have patience and perseverance, whether we can endure through pain and sorrow, to see if our relationship with Him can weather the storms, whether we turn to him in sincere supplication in times of hardship.  Those who meet these criteria, accept and learn from the test are numbered among the true believers.