How to Protect Yourself From the Evil Eye 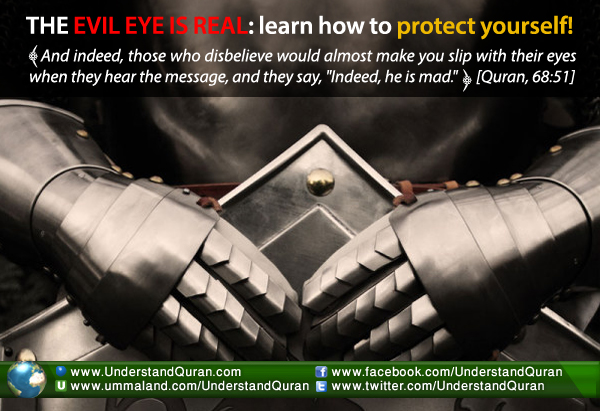 It is real and you need to know about  it, because it can greatly affect both your physical and spiritual productivity. What is it? It is the evil eye.

In this week’s central ayah Allah says: And indeed, those who disbelieve would almost make you slip with their eyes when they hear the message, and they say, ‘Indeed, he is mad.’ [Quran,68:51]

What is the evil eye?

The Arabic word al-‘ayn (translated as the evil eye) refers to when a person harms another with his eye. It starts when the person likes a thing, then his evil feelings affect it by means of his repeated looking at the object of his jealousy.

So what is the difference between the evil eye and jealousy (envy)?

The effect of the evil eye

Let’s take an incident from the seerah to realize the effect of the evil eye. The Prophet came out and traveled towards Makkah, until they were in the mountain pass of al-Kharaar in al-Jahfah. There Sahl ibn Haneef did ghusl, and he was a handsome white-skinned man with beautiful skin. ‘Aamir ibn Rabee’ah, one of Banu ‘Adiyy ibn Ka’b looked at him whilst he was doing ghusl and said: “I have never seen such beautiful skin as this, not even the skin of a virgin,” and Sahl fell to the ground. They went to Messenger of Allah  came and said, “O Messenger of Allah, can you do anything for Sahl, because by Allaah he cannot raise his head.” He said, “Do you accuse anyone with regard to him?” They said, “ ‘Aamir ibn Rabee’ah looked at him.” So the Messenger of Allaah (peace and blessings of Allaah be upon him) called ‘Aamir and rebuked him strongly. He said, “Why would one of you kill his brother? If you see something that you like, then pray for blessing for him.” Then he said to him, “Wash yourself for him.” So he washed his face, hands, forearms, knees and the sides of his feet, and inside his izaar (lower garment) in the vessel. Then that water was poured over him, and a man poured it over his head and back from behind. He did that to him, then Sahl got up and joined the people and there was nothing wrong with him [Ahmad, An-Nasaa’i and others] This was the effect of someone admiring another without praying for blessings for the person. It shows that al-‘ayn can make you seriously ill.

Four actions to take against the evil eye

1.      Use al-mu’awwidhatayn and Surah Ikhlaas with the right intention.
This means the two surah’s for seeking refuge, which are the last two chapters of the Quran: surah Al-Falaq and surah An-Naas.
Awadha (عوذ) means he refuged and both surahs are in fact two supplications that begin with: Say: I seek refuge in the Lord . . . So next time you recite them, do so with a strong conviction they are an actual supplication and  protection for you.
Ibn Al-Qayyim said that “the effectiveness of these surahs is great to repel magic, evil eye, and the rest of the evils and the need for a slave to seek Allah’s protection from these two surahs is greater than his need for self, eating, drinking, and wearing dress [Al-Fawwaid]
a. Recite Surah Al-Ikhlaas, Al-Falaq, and An-Naas three times in the morning and evening.
The Prophet said: ‘Qul Hoo wAllahu Ahad’ and ‘Muwaidaitain’ when you enter the evening and when you wake up in the morning three times and it will protect you from everything.(Tirmidhee # 3575), Aby Daud (# 5084).
Make this a habit and you will gain protection and the great reward of reviving a sunnah, in shaa Allah!
b. Blow these surahs over your body before you go to sleep.
Aisha narrated that whenever Allah’s Messenger went to bed every night, he used to cup his hands together and blow over it after reciting surah Al-Ikhlaas, surah Al-Falaq and aurah An-Nas, and then rub his hands over whatever parts of his body he was able to rub, starting with his head, face, and front of his body. He used to do that three times. [Al-Bukhaaree]
Start teaching this habit to your children from their early years and it will be an amazing sadaqah jaariyah for you!

2. Say a’oodhu bi kalimaatillaahit-taammaati min sharri maa khalaq.
The Prophet said: Whosoever says at nightfall: أعوذ بكلمات الله التامات من شر ما خلق-I seek refuge in the complete words of Allah from the evil in what He has created- no harm shall affect him [Muslim] This is only takes ten seconds, key is you really make it part of your evening routine!

3. Protect the children.
Even though we do everything for our children’s education and future, children can also be affected by the evil eye and we should protect them according to the sunnah! The Prophet used to seek refuge for al-Hasan and al-Husayn and say:
أُعِيذُكُمَا بِكَلِمَاتِ اللهِ التَّامَّةِ مِنْ كُلِّ شَيْطَانٍ ، وَهَامَّةٍ ، وَمِنْ كُلِّ عَيْنٍ لَامَّةٍ – I seek refuge for you both in the perfect words of Allah, from every devil and every poisonous reptile, and from every evil eye [At-Tirmidhee, Abu Dawood] Above is for two children; you can replace u’eedhukumaa’ (I seek refuge for you both) by u’eedhuka (for one boy), u’eedhuki (for one girl) or u’eedhukum (for more than three children). Memorize this supplication and use it on the children consistently. Use a sticky note in the house to remember if needed.

4. Pray for blessings.
Although it is correct that the evil eye comes from people who feel jealous (hasad) the scholars explained it can also come from someone who is not jealous but just likes something. The Prophet said: Whoever among you sees something in himself or in his possessions or in his brother that he likes, let him pray for blessing for it, because the evil eye is real [ Ibn al-Sunni , al-Haakim]
It is even possible to harm yourself, your wealth or a loved one. It is recommended to say: Allahumma baarik feehu, feeha or feehi ( O Allah, bless him, her or it) or the like.
So next time you see something nice someone has, or even seeing the beauty of your children or spouse, pray for blessings for them. This also means it is ok to like something someone has and want it for yourself; as long as you don’t wish that thing is taken away from the person and you make sure you pray for blessings for them!

5. Saying Mashaa’Allah laa quwatta illaa billaah is not necessarily related to the evil eye.
The hadith that was reported from Anas ibn Maalik  saying that the Messenger of Allah  said: Whoever sees something that he likes, and says, ‘Ma sha Allaah laa quwwata illa Billaah’, the evil eye will not affect him is classified as da’eef jiddan (very weak).  Allah says: It was better for you to say, when you entered your garden: Mashaa’Allaah laa hawla wa laa quwwatta illaa billaah [Quran, 18:39] This ayah is not related to jealousy, but rather Allah destroyed the man’s garden because of his disbelief and transgression.

6. Study ways of treatment from the sunnah.
If the evil is done and someone –or yourself— is already affected by the evil eye, it is crucial to follow the instructions from the sunnah, two examples of these cures are doing ruqyah (reciting certain ayaat and supplications) and if you  know who gave the evil eye, asking that person to wash themselves and pour the water over the affected person. It is strongly recommended to use trustworthy sources to study about these treatments. An example is the book: The world of the jinn and devils by Dr Umar Sulaiman al Ashqar.

May Allah ‘azza wa jall protect us all from the evils of the creation and cure all those who are affected by both physical and spiritual diseases, ameen!