A Prophetic Example of Dua for Those Trying to Conceive 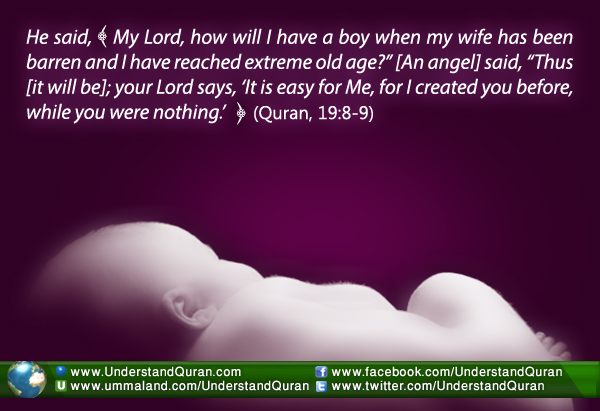 I have seen people desperate for having a baby. They will do anything, go to any place where there is the remotest chance of help. They go to all the famous doctors, go abroad for treatment, eat all kinds of medicines, try weird alternative treatments. Some even go to magicians who give them tawiz or perhaps things to eat or drink before trying to conceive. This craving for a baby of our own gives rise to perhaps one of the most thriving businesses in the world.

We end up using all our money doing all these illogical and sometimes shirky things because we are desperate and don’t know what is the correct way. So here is an example from the Quran, about the story of a famous Prophet who was in the same fix, and how he dealt with it.

Kaf, Ha, Ya, ‘Ayn, Sad. [This is] a mention of the mercy of your Lord to His servant Zechariah When he called to his Lord a private supplication. [19:1-3]

Allah is showing us an example of His mercy on his slaves through the story of Zakariyah (as). He was a prophet from the children of Israel. When he was making this prayer, both he and his wife were already very old, as Allah mentioned later in the surah. Still he was hopeful of Allah giving him something which seemed impossible by common human logic, because nothing is impossible for Allah the All Mighty.

It is also mentioned that he made his prayer in secret, because that is more beloved to Allah.

He said, “My Lord, indeed my bones have weakened, and my head has filled with white, and never have I been in my supplication to You, my Lord, unhappy. And indeed, I fear the successors after me, and my wife has been barren, so give me from Yourself an heir Who will inherit me and inherit from the family of Jacob. And make him, my Lord, pleasing [to You].” [19:4-6]

Zakariyyah first of all complains to Allah about his inabilities. Note that there is a difference between complaining about Allah, which is completely unacceptable, and complaining to Allah, which is praiseworthy. He explains his problems and obstacles in the path of what he wants. Then he tells Allah that He hasn’t ever left is prayer unanswered. That is, he is confident that Allah will answer this prayer to no matter how impossible it seems to have a child while his body has become weak and his hair white.

Then he says, I fear the successors after me. Why was he scared of the successors after him? What did he leave behind to inherit? He was a carpenter, and so obviously he didn’t have much wealth to leave behind. What he feared was that those succeeding him would not hold up Allah’s deen. He was talking about the inheritance of prophethood. He made his reason clear in his dua, that he didn’t want a child for taking care of him or inheriting his wealth, but for the sake of Allah, and he asked Allah to make the child pleasing to Him.

Look at the way Zakariyah is making dua. He didn’t just memorize some dua and repeat it over and over again. He was actually talking to Allah, complaining to Him, confiding in Him his worries and wishes in detail. Dua is supposed to be like that, a conversation with Allah. Also, he wasn’t asking for something to make his dunya better. He was asking for the progeny of prophets to continue, in order to save his Hereafter.

Allah prompty answers the prophet’s dua through His angels, and even gives his son a unique name Himself.

[He was told], “O Zechariah, indeed We give you good tidings of a boy whose name will be John [Yahya]. We have not assigned to any before [this] name.” [19:7]

Now look at how Allah answered His dua. He didn’t just give him what he wanted, a son who is pleasing to Allah. He gave him much much more. Yahya was an amazing, unique person. Look at how Allah Himself praises him:

[ Allah ] said, “O John, take the Scripture with determination.” And We gave him judgement [while yet] a boy And affection from Us and purity, and he was fearing of Allah And dutiful to his parents, and he was not a disobedient tyrant. And peace be upon him the day he was born and the day he dies and the day he is raised alive. [12-15]

(To talk to Allah while making dua in Arabic, we need to understand what we’re saying. Take this 9 hours course on learning 50% of the Quran. )

So talk to Allah the way Zakariyah talked to him, and have confidence that Allah won’t just answer your dua, but will in fact give you much more in sha Allah. We don’t need to resort to illogical methods for getting what we want. Allah has already given us the most powerful tool, we just need to use it with sincerity.