Productivity Lessons From the Story of Aadam [as] 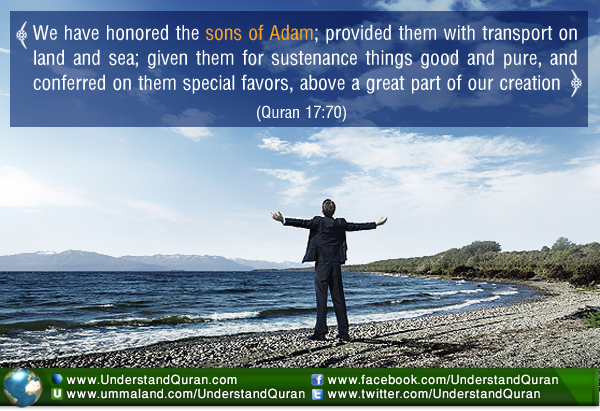 You probably know the story of Aadam ‘alayhis salaam, but do you know how to make this story relevant to you?

Do you know how Aadam ‘alahis salaam dealt with family issues? Or that two very important must-have habits are found in his story, as well as the secret of the importance of knowledge and five clear life lessons to help you benefit in this life and the next?

Let’s get started and derive a selection of true productivity lessons from the story of the Prophet Aadam ‘alayhis salaam!

This is the week’s central ayah: We have honored the sons of Adam; provided them with transport on land and sea; given them for sustenance things good and pure; and conferred on them special favors, above a great part of our creation. [Quran, 17:70]

Lesson 1: Alhamdulillah! Practise the sunnah of sneezing.
Practising a sunnah and telling others about it is a very simple act but one that can bring you lots of hasanaat (rewards) from your Lord. The Prophet salallahu ‘alayhi wa sallam said: When He breathed into Adam and the soul reached his head, he sneezed and said: ‘Alhamdu lillahi Rabbil-‘Alamin.’  Allah answered him by saying: ‘Yarhamuk-Allah (Allah bestows His mercy upon you).’  [Saheeh Muslim]

The first word Adam ‘alayhis salaam said was alhamdulillah and the first thing that happened to him was the bestowing of Allah’s mercy on him, subhanAllah! This is the start of an important sunnah and a must-have habit for us: When you sneeze say alhamdulillah and when someone else sneezes and praises Allah, you respond with yarhamukAllah (look for these duaa’ in the Fortress of The Muslim dua book). Now, whenever you say these words, you can always remember the important moment in history when it was first mentioned!

Lesson 2: Say As-salamu ‘alaykum!
The Prophet salallahu ‘alayhi wa sallam said: Allah created Adam sixty dhira’a (cubits) tall, and then said to him: ‘Go and greet those angels, and listen to what they greet you back with, because that will be your greeting and the greeting of your progeny.’  Adam said: ‘Asalaamu ‘Alaykum.’  They greeted him back saying: ‘Assalamu ‘Alaykum wa Rahmatullah.’  So, they added to what he said: ‘wa Rahmatullah.’  Hence, everyone who enters Paradise, will enter it in Adam’s image, and since that time humans are being reduced (in their height) until now.  [Saheeh Al-Bukhaaree]

Asalaamu ‘alaykum means “peace be upon you” and wa rahmatullah means “and the mercy of Allah.” This is the way a Muslim must always greet another Muslim, and it all started when Aadam [as] was created!

Lesson 3: Knowledge is sacred.
Why were you created? Who are you? What is your identity? After his creation Aadam [as] witnessed the disobedience of Shaytan, who refused to prostrate to him. Aadam [as] realized that Iblees (Shaytan) was his enemy. But he [as] didn’t know anything about himself! Then Allaah [swt] made him understand his true identity and the reason for his creation, and the secret of his glorification. Allaah the Exalted said: He taught Adam all the names of everything. [Quran, 2:31]

Allaah ‘azza wajal implanted in Aadam [as] a strong need for and love of knowledge and a desire to bequeath knowledge to his children. This was the reason for his creation and the secret of his glorification over the other creatures. After witnessing the knowledge that Allaah ‘azza wajal taught Aadam [as] the angels realized that Aadam [as] was the creature who knew what they did not know and this capacity to learn is our noblest quality! How do you use this amazing ability with which Allah [swt] honoured you?

Lesson 4: The heart changes.
Aadam [as] and Hawa (Eve) knew they were forbidden to eat the fruit of a particular tree, but they did. Aadam [as] however was human; his heart changed and his will weakened. And so does yours. The Arabic word for heart is qalb, which means to change or to flip. Always make dua’ to Allaah [swt] to make your heart firm. You can use this dua’ from the sunnah: Yaa muqallibal quloob, thabbit qalbee ‘alaa deenik – O Turner of the hearts, make my heart firm on your religion.

Lesson 5: Raise your children to improve the world.
Aadam [as] and Hawa bade farewell to the peace of Paradise and had to face conflict and struggle on earth. He had to work to sustain himself, protect himself with clothes and weapons and protect his wife and children who were born. And above all he[as] had to struggle against shaytan in his effort to have him and his children to be thrown in the hellfire. Aadam [as] grasped all of this and started his life on earth. He knew he had to cultivate and construct and populate the earth and raise children who would change and improve the world. And this is your task until this day. You are an ambassador on this earth, if you leave this world without making a positive change to it, without using it to do good deeds, the heavens nor the earth will cry for you.

Lesson 6: Family problems? Ask Allah [swt]!
Aadam’s [as] son Qaabil was jealous of his other son Haabil and it caused great stress in the household. Aadam [as] was in dilemma; he wanted harmony in his family, so what did he [as] do? He invoked Allah [swt] for help. This seems a simple, logical first step, yet many of us don’t do this. In all other aspects of life we are as patient as we can, but when it comes to family many of us show ‘their worst’ side. As if you can ‘relax’ the rules of good Islamic character at home. Many of us face family dilemmas; make sure the first thing you do is asking Allaah [swt] to help you.

Lesson 7: The Importance of Sincerity
Haabil said to his jealous brother: “It would be more proper for you, my brother to search for the cause of your unhappiness and then walk in the way of peace. Allah accepts the deeds only from those who serve and fear Him, not from those who reject His Commands.” SubhanAllaah, having ikhlaas (a sincere intention to please Allaah [swt] alone) is crucial for any deed to be accepted!

Lesson 8: Five Ways to Devastation Versus Five Ways to Salvation
Shaytaan was devastated only because of the following five facts: he did not confess and admit his sin, he did not regret for his rebellion, he never criticized himself, he did not repent and he lost his hope for Allah’s mercy.

Aadam [as] found salvation thanks to the following five facts: he confessed his sin, he regretted for his sin, he criticized himself, he repented right away and he always hoped for Allah’s mercy.

Here you go, five habits for spiritual productivity: realize and admit your sins, regret your bad deeds, criticize yourself, repent right away and always think good of your Lord!

Final note: Four Ways to be Productive Through the Lives of the Prophets

1.      Studying their lives is ‘ibaadah. Allaah ‘azza wajal commanded the Prophet [saws] to tell us about the prophets; it is mandatory for us to convey the message of the prophets to others too!

2.      ‘La’allahum yatafakkaroon’: so they may reflect. The stories of the prophets are not for entertainment, but to derive lessons from them and deeply reflect!

3.      Take them as role models: they are the ones who are guided. They are the best. Every human being has role models. Taking the prophets as your role models is one of the most effective ways to be productive in this life.

4.      Love them. Your love for them will fill your heart with life. And a heart that’s beaming with faith will produce actions of righteousness!

Homework:
Use the Quranic dua’ of Aadam [as] for forgiveness in your own daily life!
قَالاَ رَبَّنَا ظَلَمْنَآ أَنفُسَنَا وَإِن لَّمْ تَغْفِرْ لَنَا وَتَرْحَمْنَا لَنَكُونَنَّ مِنَ الْخَـسِرِينَ
They said: “Our Lord! We have wronged ourselves. If You forgive us not, and bestow not upon us Your mercy, we shall certainly be of the losers.

May Allaah ‘azza wajal guide us to learn from and practice the lessons from the lives of the prophets, ameen!