My Quran by Naheed Tahir 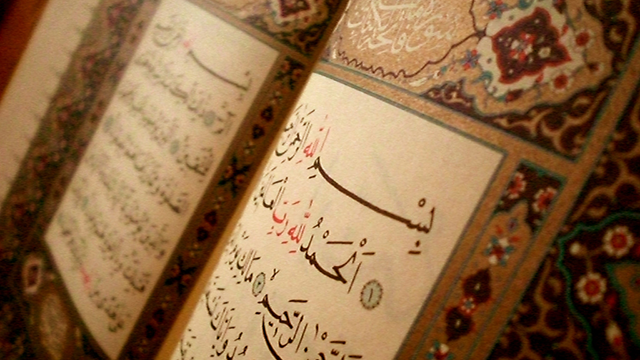 My Quran has been with me for the past 34 years. When I say “my” Quran, I mean the one I bought when I had completed my first recitation. I remember the day—  I was so proud when I bought it from what was then one of the few halal shops in our area in the UK.  I was twelve before I had finished reading it for the first time.

At times I thought I would never be able to finish it; at first I couldn’t recognise the letters, and then I couldn’t remember how to join them. I had to start off by trying to memorisie the ayahths (verses), which was hard for me, but slowly it began to make sense and I started recognising how to bring the words together.

My struggle took even longer because like most girls at that time I went to someone’s house to learn how to read Quran and for some reason unknown to me my teachers stopped being able to teach me. So you can understand why I thought I would never complete the Quran. I was on to my seventh teacher (may Allah swt give her much reward for her patience ameen) and alhamdulilah I finally completed my recitation.

My father (may Allah swt grant him Jannathul firdous ameen) sewed the green covering for my Quran that it wears to this day. My Quran went everywhere with me— it went with me when I got married and moved to every house that I moved to. Even when I went to stay in Pakistan with my family for two years in 2002 it went with me and when I came back I left many things there but my Quran came back with me.

For 32 years I kissed and opened my Quran from time to time and recited its ayaths (verses). For 32 years I thought that this was what the Quran was for,  to recite and to gain the ajr. Like most non-Arab Muslims my concept of Quran was that I would not say wrong as inshAllah we do get the ajr for reading it. But I was confused, wrapped in darkness. Why darkness ? Because until you don’t see the light you don’t understand what darkness is. As Allah swt says in the Quran:

Alif, Lam, Ra. [This is] a Book which We have revealed to you, [O Muhammad], that you might bring mankind out of darkness into the light by permission of their Lord – to the path of the Exalted in Might, the Praiseworthy. – Surah Al Ibrahim 14:1

Now you’re probably wondering why I said 32 years and not 34 but that’s just how long I had had my Quran. The answer is quite simply that I truly believe that Allah swt guided me in the year 2010. I truly believe HE swt brought me out of the darkness into the light. It was the blessed month of Ramadan, August 2010, and by chance my daughter mentioned something about a sister’s circle that was being held each Wednesday at one of the universities.

The teacher (may Allah swt grant her success in the dunya and akhira for all her efforts ameen) was going to do the explanation of the Quran in revelation order. For some reason I asked if anyone could go or if it was only open to university students.  I was told anyone I could attend, so with my notebook and pencil in hand I went to the first lesson.

The first lesson explained how and when the Quran was first revealed, something I had vaguely known about, but now I could imagine that scene that took place inside the cave of Hira, the scene that brought us that very first revelation. When our teacher told us that Allah swt guides people to what they are seeking and that the very fact that we were sitting there listening to her was testimony to this, I couldn’t hold back my tears.

Around this time I had started watching a programme on Peace TV called “Understand Quran”. It was in Urdu, and although English was my first language I had a good understanding of Urdu, so I started watching it. I was amazed and shocked as it suddenly dawned on me that although I had read the Quran in Arabic many times, and had even read the English translation maybe once or twice, I had never understood it!

SubhanAllah! The more I watched Dr. Abdulazeez Abdulraheem (may Allah swt reward him and Peace TV for all their efforts) the more I realised that I had never reflected upon its verses because I hadn’t understood the Arabic language and had not bothered to read any translation alongside the Arabic.

Allah swt says in the Quran:

[This is] a blessed Book which We have revealed to you [O Muhammad], that they might reflect upon its verses and that those of understanding would be reminded. Surah Sad 38:29

Where was my reflecting? Where was my understanding?  How can a person be reminded if he or she doesn’t understand what they are being reminded of?  So I watched those programmes and by the end I at least knew what I was reading in my Salah five times a day, things that had never occurred to me. By the end of the programme I knew more than I imagined in a short space of time. I now knew what the opening chapter of the Quran Surah Fatiha was telling me, this same Surah I had been reading in my Salah. I had never known that all along I had been asking Allah swt to guide me.

Once I knew what I was asking for, the words came from my heart and not just from my mouth. Doors began opening for me quickly when I started learning the meaning of the Quran in revelation order in the blessed month of Ramadan, August 2010.

In November 2010 Allah swt granted me the honour of performing the Haj. What more could a slave of Allah swt want?

So whoever Allah wants to guide – He expands his breast to [contain] Islam . . .