Why Do Muslims Love Maryam? 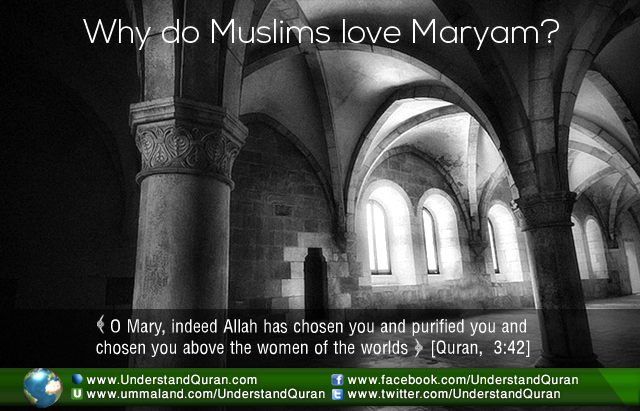 7 lessons from the best woman of the worlds

She is the only woman mentioned by name in the Quran and is more often mentioned in the Quran than in the entire New Testament. An entire surah in the Quran is named after her and in this week’s central ayah Allah the Most High mentions her as the best woman to have ever lived: And [mention] when the angels said, O Mary, indeed Allah has chosen you and purified you and chosen you above the women of the worlds. [Quran, 3:42]

She is Mary, or in Arabic: Maryam bint ‘Imraan, peace be upon her.  Here are seven inspiring life skills and productivity lessons you might not have thought about, from the greatest woman who ever lived!

The mother of Maryam was the wife of `Imraan, and her name was Hannah bint Faqudh. She supplicated to Allah the Most High to grant her offspring, and her supplication was accepted. The first clear lesson to learn is to simply turn to your Creator with your wishes and ask Him.

When she found out she was pregnant she asked: O my Lord! I have vowed to You what (the child that) is in my womb to be dedicated for Your services, so accept this  from me . . . [Quran, 3:35] How many times throughout the day do you actually ask Allah the All mighty to accept a deed of yours? No matter how big or small, for example trying not to step on an insect, ask Allah to accept it from you being done for His sake so you will get rewarded for it. Also, think about your children’s Hereafter and each day ask Allah for them to be successful in the eternal life.

2.Realize youth is precious time and recognize your blessings.

So her Lord accepted her with good acceptance and caused her to grow in a good manner and put her in the care of Zechariah. Every time Zechariah entered upon her in the prayer chamber, he found with her provision. He said, O Mary, from where is this [coming] to you? She said, It is from Allah. Indeed, Allah provides for whom He wills without account. [Quran, 3:37]

As she grew up, Maryam, peace be upon her, could often be found in a prayer chamber. This shows you she didn’t grow up watching television, partying, or wasting her time. Another point to note: nowadays, you sometimes see people who are looked at as righteous, or who’ve just started practising their religion, who look down on others and who even boast about their own righteous behaviour. When Maryam was asked about her provision, she admitted it was from Allah the Most High. She could have said it was because of her hard work, but she didn’t. She was humble.

Maryam withdrew herself from her family in seclusion and met Jibreel, peace be upon him. Then We sent to her Our Angel, and he represented himself to her as a well-proportioned man. [Quran, 19:17] Not knowing who this man was, what was her reaction? She said: I seek refuge from you with the All-Merciful, [leave me] if you have fear of Allah [Quran, 19: 18] Her words show her ultimate trust in Allah. How often you get scared and forget to call upon Him? Seek refuge in Allah in your daily life, whenever you feel scared, worried or sad and truly feel your trust in Him.

4. Don’t surrender to sadness and look at others’ trials.

Jibreel gave Maryam the news of a son, assuring her that Allah the Most High can make everything happen with ease, and: So she conceived him and withdrew with him to a distant place. [Quran, 19: 22] Now, whenever you feel alone and tested, deeply reflect on this ayah and try to imagine the scene:  And the pains of childbirth drove her to the trunk of a palm tree. She said, ‘Oh, I wish I had died before this and was in oblivion, forgotten.’  But he called her from below her, ‘Do not grieve; your Lord has provided beneath you a stream.’ [Quran, 19: 23-24]

Think of her pain, her being all alone, with no support. Usually lonely people surrender to sadness and helplessness. But Maryam did not. She kept seeking His Help and making choices she thought would be pleasing to Allah. She never gave in to depression because she knew if she would only trust Him, Allah would give her a solution. And He did. So put your trust in Him, no matter the difficulty; look at the trials of those before you and those being tested right now in other places of the world. Don’t lose hope, and He will turn all hardships into goodness and beauty. That’s a promise.

5. Don’t be fussed about people’s acceptance.

She then returned with the baby to her community and another amazing character trait was her lack of interest in winning her people’s acceptance. She vowed silence, put her trust in Allah to take care of her situation with all these people criticizing and questioning her and pointed at the miraculous baby that Allah would made to speak:  Esa ( Jesus in English) peace be upon him, the great prophet. How many times do you feel pressured by the people around you? Maryam surrendered to our Lord with pure emaan– faith— and she was therefore unaffected by their comments and accusations.

6. Be patient in fulfilling your responsibilities.

Long shifts, taking care of the family, the house, etc.,  people pulling at you from all sides . . . Maryam, peace be upon her, braved all the difficulties and performed with patience all her responsibilities. How many times do we complain, saying, “I can’t be bothered to read Quran now, or to help that person,” or complain about the way Allah likes us to dress?  Respect the responsibilities Allah gave you towards your family, environment, and the ummah. Think of the difficult tasks Allah set for Maryam, only for her to show how strong she was and how much she deserved a beautiful kingdom in Paradise.

Look at Maryam, peace be upon her; through her strong faith, manners, and actions she was a living invitation to belief in Allah. So first, look in your heart and feel how blessed you are to have belief in your creator planted in you, and then show your beautiful faith to others, by treating them justly, never using foul language, helping others, displaying patience in times of hardships, and constantly speaking words of praise and thanks to Allah, and so reflect the beauty of Islam to the world around you.

And [mention] the one who guarded her chastity, so We blew into her [garment] through Our angel [Gabriel], and We made her and her son a sign for the worlds. [Quran, 21:91]

May Allah, the Most High, enable us to learn from her story and guide us to act upon our knowledge, ameen.