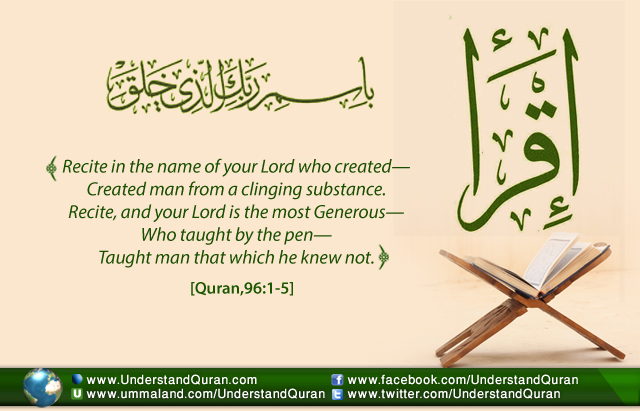 Have you ever seen how a blind Muslim expresses his love for the Quran? He kisses it with tear-filled eyes and touches its cover with respect and deep love in his heart. He cannot see the words, so he listens to its verses and to quench his spiritual thirst.

Be like that blind Muslim— pick up the Quran, hold it in your hands, and, if you can’t recite yourself, listen to the beautiful recitations that are now so easily available.

Recite in the name of your Lord who created—

Created man from a clinging substance.

Recite, and your Lord is the most Generous—

Who taught by the pen—

Hikmah of Reading the Quran:

An old American Muslim lived on a farm in the mountains of eastern Kentucky with his young grandson. Each morning Grandpa was up early sitting at the kitchen table reading his Quran. His grandson wanted to be just like him and tried to imitate him in every way he could. One day the grandson asked, ‘Grandpa! I try to read the Quran just like you but I don’t understand it, and what I do understand I forget as soon as I close the book. What good does reading the Quran do?’ The Grandfather quietly turned from putting coal in the stove and replied, ‘Take this coal basket down to the river and bring me back a basket of water.’ The boy did as he was told, but all the water leaked out before he got back to the house. The grandfather laughed and said, ‘You’ll have to move a little faster next time,’ and sent him back to the river with the basket to try again. This time the boy ran faster, but again the basket was empty before he returned home. Out of breath, he told his grandfather that it was impossible to carry water in a basket, and he went to get a bucket instead. The old man said, ‘I don’t want a bucket of water; I want a basket of water. You’re just not trying hard enough,’ and he went out the door to watch the boy try. At this point, the boy knew it was impossible, but he wanted to show his grandfather that even if he ran as fast as he could, the water would leak out before he got back to the house. The boy again dipped the basket into river and ran hard, but when he reached his grandfather the basket was again empty. Out of breath, he said, ‘See Grandpa, it’s useless!’ ‘So you think it is useless?’ The old man said, ‘Look at the basket.’ The boy looked at the basket and for the first time realized that the basket was different. It had been transformed from a dirty old coal basket and was now clean, inside and out. ‘Son, that’s what happens when you read the Quran. You might not understand or remember everything, but when you read it, you will be changed, inside and out. That is the work of Allah in our lives.’

So even if you can’t understand or memorize the Quran, read it anyway!

Reading is the beginning; it will clean and soften your heart and invoke the urge to understand it

We should learn tajweed so that we can enjoy the taste of His words more, feel  the words being engraved  on our hearts, and our hearts themselves yearning to know the Quran better.

Memorize the Quran and Allah will honour you in this world and the hereafter.

The Prophet (saws) said, ‘The one who was devoted to the Quran will be told on the Day of Resurrection: ‘Recite and ascend (in ranks) as you used to recite when you were in the world. Your rank will be at the last ayah you recite.’ [Abu Dawud]

It’s our duty as Muslims to learn Arabic and to understand the true meaning of the words. Arabic is a vast and deep language in the Quran, and each word has its own essence; their original meaning can conquer hearts if we only strive to understand. Otherwise we will be just like those Muslims who do not know what the Lord wants from them.

The Quran effects hearts according to the condition of iman. If there is kamel iman in a heart one can understand more as compared to a Muslim who has weak iman.
Abu Musa quoted our Prophet (saws) ,’ the guidance and knowledge with which Allah has sent me are like abundant rain which fell on a land. A fertile part of it absorbed the water and brought forth profuse herbage and pasture; and solid ground patches which retained the water by which Allah has benefited people, who drank from it, irrigated their crops and sowed their seeds; and another sandy plane which could neither retain the water nor produce herbage. Such is the similitude of the person who becomes well-versed in the religion of Allah and receives benefit from the Message entrusted to me by Allah, so he himself has learned and taught it to others; such is also the similitude of the person who has stubbornly and ignorantly rejected Allah’s Guidance with which I have been sent.’  [Bukhari,Hadith 1378]