Your Life is What Your Thoughts Make it 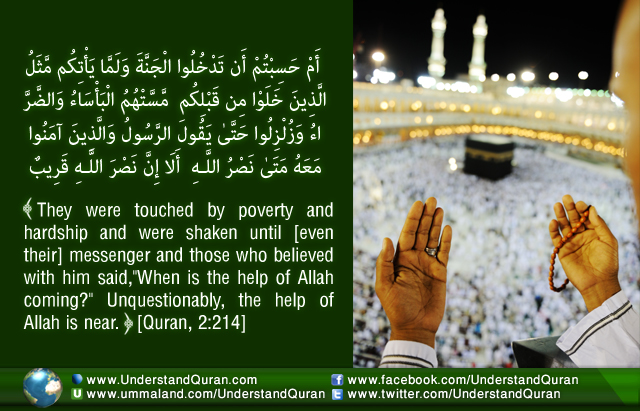 “Our Life is what our thoughts make it”, said Marcus Aurelius, a Roman emperor who lived nearly 200 years ago. He also said, “The happiness of your life depends upon the quality of your thoughts: therefore, guard accordingly, and take care that you entertain no notions unsuitable to virtue and reasonable nature.”

Psychology today, and Cognitive Behavioural Therapy specifically focus heavily on our thoughts and thought patterns. Dr. David Burns says that the difference between sadness and depression is that sadness is just that- sadness over a life even that happened to go wrong. Depression on the other hand is a pattern of negative thinking associated with a certain life event.

Your thoughts make or break you. Steve Jobs once said, “Those who are crazy enough to think they can change the world usually do.” And, amazingly Allah has taught this to us over and over again in the Quran. When the Quraysh were torturing the Sahabah, the suffering was brutal. It was going to the point where they were almost losing it. And then in Surah Baqarah, Allah tells them about a certain nation,

Allah immediately shifts their thinking patterns to remind them that the help of Allah is near!

When the Prophet sallallahu alayhi wasallam was first given revelation, he rushed home to the comfort of his eyes, his safe haven, his best friend and wife, Khadijah radi Allahu anha to tell her of his meeting with Jibreel alayhi salam. He was worried if he was mad, and what was going wrong with him. Khadijah, the woman that she was, reassured the Prophet sallallahu alayhi wasallam that he was the most upright man in society, that he helped the poor and needy, and never spoke a lie, and thus Allah would never let him go astray.

After the Prophet sallallahu alayhi wasallam started preaching the message of Islam, there came a time when the revelation from Allah stopped. The Prophet was greatly distressed as he loved the Quran, and wanted to read more and more of it. The Quraysh, taking their chance, started mocking the Prophet and saying “your Lord has given goodbye to you”, and kept up their mocking to the point where the Prophet almost starting having similar thoughts as well. That was when Allah revealed Surah Duha, and mentioned in it, “Your Lord has not left you, nor does He hate. And what will come after is better than what has come before. And your Lord will give you and you will be satisfied.” [2] Not only does Allah refute the notion that Allah has left the Prophet, He also changes the thoughts and makes it positive. Allah promises the Prophet that what is to come will be better, and that Allah will make him satisfied. Allah at this time also revealed Surah Inshirah where He mentions, “Indeed with hardship there will be ease” [3]

Throughout the Seerah we see many other similar instances where the Prophet urges the Sahabah to think differently than what is apparent. For example while they were hungry and in siege during the Battle of Ahzab, the Prophet sallallahu alayhi wasallam was telling the Sahabah that one day they would defeat the Roman and the Persian empires.

The Prophet sallallahu alayhi wasallam said, “Allah the Most High said, ‘I am as My slave thinks (expects) I am. I am with him when he mentions Me” [4] In other words, Allah will do as we think of Allah. Have we made dua and think Allah is not going to respond? Chances are that He won’t! Are we thinking that Allah will not get us out of our situation and help us get back onto life? Then He won’t.

As Muslims, we are firm believers that our hopes, dreams and aspirations are ultimately in the hands of Allah. And if our thoughts are negative about Allah, then our life will not really be the life that we are looking for. While if our thoughts are positive, and we know and trust al-Wakeel, the Trustee, to take care of our affairs, and we fully trust in al-Qadir The Powerful One to be in full control over whatever obstacle it is that we are facing, then what is preventing us from achieving our success in this life and the next?