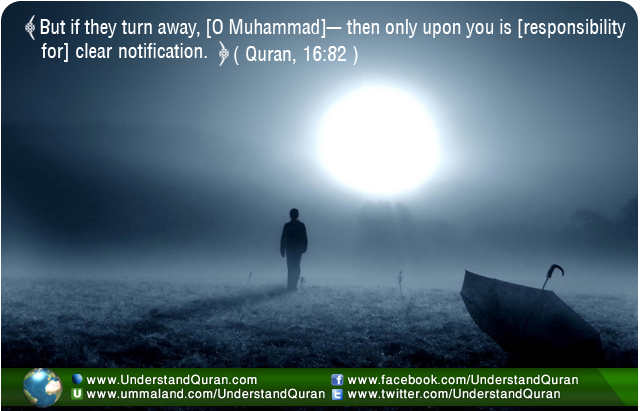 Prophet S.A.W had Abdullah Bin Ubaiy in life. He also had many other haters. It hurts to have haters— it’s human nature. But this hurt should not be powerful enough to stop us from living our purpose and pursuing our mission. Let the haters hate. Let the caravan go on.

I’ve also had my days of struggle. During the early days of my transformation to becoming a Muslim by choice from being Muslim by chance, I was scared of people, I confess, and this fear was overwhelming. I didn’t want people to hate me. The fear of love loss is a powerful influence. No one wants to be hated, and everyone is fearful of losing love.

But if you are pursuing the path of righteousness and carrying the prophetic mission forward and if you are on a quest for truth, then this truth is going to hurt others. No one likes to hear that their way of life is not accurate or not in line with the divine guidance. Even the most misguided people think that they are leading an angelic life style.

Prophet’s uncle, Abu Lahab loved him dearly. When he was born, Abu Lahab was overjoyed and freed the slave woman  who brought the news of the birth. Later, Prophet (saw) married two of his daughters to two sons of Abu Lahab.

But then the love transformed into animosity, the warmth of the emotions disappeared, the relationship got scarred, and Abu Lahab started hating the prophet (saw). He became his most stringent opponent and worst critic. Why? He didn’t want to hear the truth, and he didn’t want to change.

Yet the hurt and the fear combined were not powerful enough to stop our prophet (swt) from standing for what’s right and upholding Allah’s system.

But what about us? Haters demoralize us. Every ounce of negativity they generate with their words or actions is very destructive to our morale and our mission. The not-so-complicated formula to deal with them is to fix them, and if you can’t fix them then avoid them. Allah says in the Quran:

Your job is to convey the truth and not to make them accept it. Accountability rests with Allah.

Have you ever noticed that when some people call you, the mere sight of their “names” flashing on your mobile screen is enough to make you put your mobile on silent? This is their lethal negative energy. Even if you do your best to ignore their negativism (either in the form of words, actions or facial expressions), your subconscious minds records it all. It penetrates your thoughts even before you notice its impact.

It’s suicidal to let too much of criticism enter your brain because if you do so, your subconscious mind will record the data. And every time you come across a difficult situation or fail at something, the subconscious mind will bombard those images back on you (See? Like she told you— you are such a loser!) and you’ll start to believe that your haters were right somewhere.

I am talking about ill-intended criticism and not the constructive feedback that pushes you to become a better version of yourself! I am just focusing on the strategy of the haters that thrive on the opportunity to hold you down. We have enough repulsiveness already— television, newspaper, and social media are constantly broadcasting a neverending stream of nasty goings-on— and this gives us more reason to avoid the negative people more.

When talking about the negative people and haters, it’s important to introduce you to Brutus— yes, the same well-trusted Shakespearean Brutus who lovingly stabbed Caesar. Why am I bringing it here? That’s because it’s incumbent upon us to know that we are surrounded by a lot of Brutuses.

It’s easier to recognize the negative people who are venting their negativity openly and are being malevolent but it’s very hard to recognize those who have pleasantly disguised themselves. These people will tell you that you are a loser in such a pleasant way that you’ll never be able to identify their sinister intentions.

Let me give you a personal example. When I wrote my research synopsis, my professor told me that if I really complete the research it would be a unique discovery and a great contribution. But then I met some “well-wishers” who told me that it’s impossible to carry out this kind of research at my level, saying that usually only Ph.D research work is that intense and detailed.

“And you are getting married in few months. What if you fail to complete it? You’ll fail M.Phil altogether!” My guards were down and their trick worked. I ended M.Phil with quite an insignificant research.

These pathological critics offer sugarcoated poison. Drink it and you are dead. Similarly, heed their advice and you are sabotaged. You’ll change your subjects, jobs, give up on Dawah mission or make similar stupid decisions in your life because a critic (who doesn’t have any credential himself) told you to do so. Don’t let them dictate your decisions. Don’t let them sit on the driving seat of your life. They are Brutus-es – who are stabbing you in your back. Watch out!

So what you need to do is to have enough courage not to let the nasty people and the Brutus-es come near you. You can never achieve any success in both the worlds if you have surrounded yourself with haters and nay-Sayers.

And now, listen very closely, if you are a Da’ee working to uphold Allah’s system, you’ll see plenty of such people in your life.  Probably it’s also a part of Allah’s master plan to test us with these people. When you are doing Amar BilMaroof, most of the people will love you but Nahee anal munkir is the real challenge. It’s when your loved one will become your enemy and your friends will become foes. As I said earlier, people hardly want to mend their ways. So they attack you to hide their shortcomings. “You know what, you should start doing Dawah when you are a perfect Muslim yourself.” “Oh, this is a temporary phase, it will go away”. “I’ll see how long and you going to carry yourself in Hijaab”. Let them blow their steam. Do not let them discourage you from your mission. Do not let them scare you. Allah SWT says,

Are their own hands clean with what they are accusing you of? Are they living a life in perfect obedience to Allah and his messenger? Is their criticism worth being dignified with your attention? If the answer is NO, then say good-bye to the uninvited criticism and move on. Do what you are supposed to do. Carry out your mission and ignore them. Remember, Prophet S.A.W never dignified Abdullah Bin Ubaiy with his counter arguments. He never sought counsel from Abu Lahab. He never put an ear to the criticism of those who called him a poet or lunatic. He just did what he was supposed to do – spread the light. I remind myself and you to do the same, spread positivity and the negativity will take care of itself.