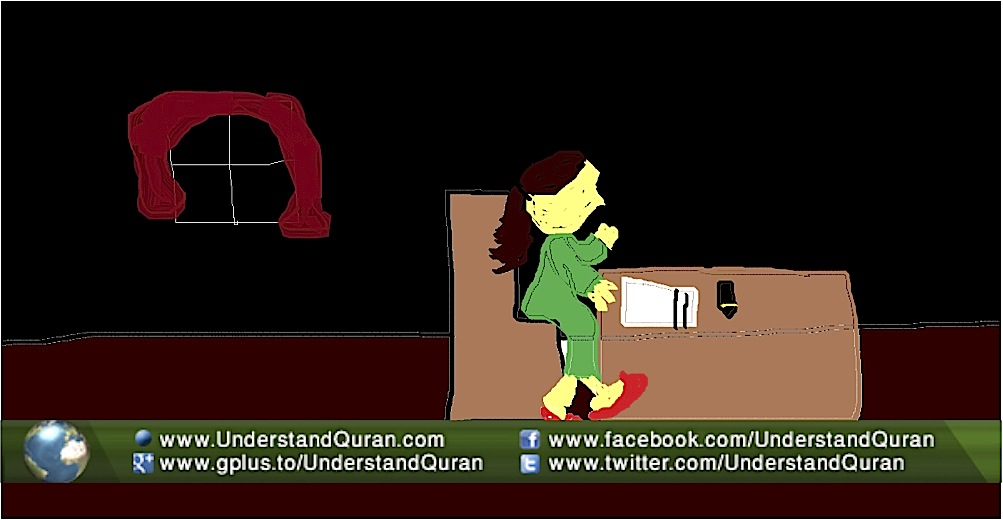 “Leena, are you going to fast tomorrow?” asked Mrs. Noor.

“Then, why don’t you say the fasting dua I taught you?” asked her mother.

Her mother said happily, “Wow! Masha Allah! That was great!”

Her little sister, Jannah, was eating and playing with the toy trains.

Leena’s father took his shoes off, got his slippers, and made his way to the bathroom.

Leena went to her room.

Then her mother came into the room. “Leena?” Her mother called. “You need to sleep early if you want to wake up for suhoor.”

Leena was in a deep sleep. She dreamed of all kinds of food. Her Mom came over and nudged her gently. Leena’s eyes were burning, but she knew what she had to do. She was all ready for suhoor.

Leena went downstairs. She ate a cheese sandwich and some honey tea for suhoor. Mommy and Dad ate toast with butter and had coffee. With the clinking of the dishes, Jannah woke up from sleep. She joined in. She had a cup of warm milk.

Leena looked so tired. But she was seven. It is becoming compulsory for Leena to read salah. She knew if Jannah joined salah, then she would only say nonsense words.  And she was correct. Jannah did say nonsense words while reading salah so they all became confused. Leena’s mother put Jannah to bed. At last they could read their salah correctly.

Leena was falling asleep, but, she managed to read salah. She couldn’t read Quran because of her sleepiness.

After making the du’a, everyone went off to sleep for a couple of hours. At 7:00 a.m. the alarm went off. Leena woke up from sleep.

She put on her school uniform and came down for breakfast. “Ooops! No breakfast! I’m fasting today!”

Then she was just about to go and brush her teeth. “Leena?” her mother called. “Where are you going, dear?” Leena looked to the bathroom door. “I’m gonna brush my teeth.”

Mrs. Noor giggled and said it is better not to brush our teeth while fasting but it is recommended to use miswaak.

“Oh dear! You’ll be late for madrasah!” cried her mother. Leena went to get her school bag.  She gently got her Quran, opened the door, and walked to madrasah.

Jannah said, alamalaykum, Leena.” Leena answered Jannah’s salaam and walked to madrasah. Once she reached there she opened her Quran. While reading, she was not paying attention because she kept thinking of pizza.

The teacher looked at Leena for a while, and then began to speak to her. “Leena, are you reading or thinking?” Then she held the pointer near Leena and Leena was frightened when she saw the pointer near her so to get her mind off of pizza, she said, Auzu billaahi minash shaytaanir rajeem. (I seek refuge in Allah from the hands of the rejected one.)

After Leena said the ta’awuz, she felt a lot better. She could read Surah Tawbah correctly now. She also didn’t make mistakes when reading the Hadiths, Duas, and many other things.

Then it was time to read Dhuhr Salah. Soon it was time to go back home. While she was walking home, she passed the streets and a lake. Her feet were aching. Mommy was at home, probably feeding Jannah her favorite meal— macaroni and cheese. Leena became sad and her tummy started to growl.

Why was she worried? She was almost home! She stepped inside, untied her  shoelaces, put the Quran on the shelf, and plopped down on the sofa.

“Mommy?” No one answered. She was just too tired. She moaned. Then she went upstairs to Jannah’s room. Jannah was asleep.

Leena walked into her room and closed her eyes. She too was fast asleep.

When Leena woke up she ran downstairs.

Jannah was drinking chocolate milk and Mommy was making iftar. “As salam u’alaykum, Leena. Where were you? I didn’t see you stepping into the house,” Mrs. Noor said gently.

Then Leena went to her room to draw a picture. She saw her sister eating jelly beans and watching her draw. By mistake Jannah dropped a pink jelly bean. Leena looked at the jelly bean. Pink is her favorite color. Leena quickly grabbed that jelly bean and ate it. When it went down her throat, she remembered and started to cry. “Oh dear! I’m fasting!”

She ran downstairs and told mommy what had happened. “It’s all right! You didn’t break your fast! You ate it by mistake, right?”

Leena replied “Yes, by mistake.” Then Leena went to her room and play a game on the computer.

Leena’s father came home from work. “As salaam u’alaykum everybody!” Everybody went downstairs for iftar. They heard the adhaan from the adhaan clock. Leena broke her fast with dates, water, samosas, and crackers. Then they all went to the mosque for taraweeh.  Leena and her mother read salah and Jannah was fast asleep.

When they came home they were so tired. Leena felt so happy that she had been successful in fasting the entire day.

Suhoor: A meal before fajr salah that we eat to get strength to fast

Zainab Mondal loves books. This is the first book she’s made online. She’s now eight years old. Zainab’s parents are from India and the family is currently residing in Drexel Hill, Pennsylvania.