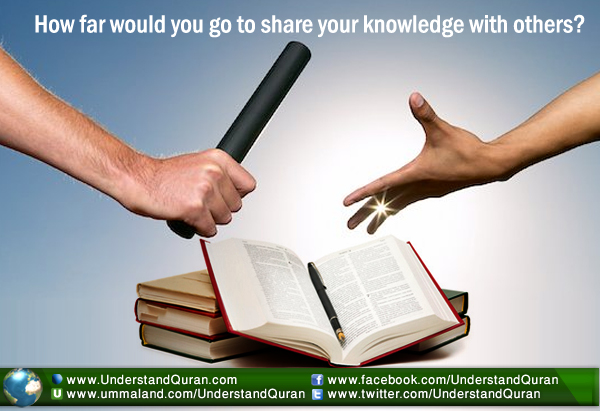 There was once a time when people literally travelled thousands of kilometers in quest of knowledge. At present knowledge is available at our fingertips, in the comfort of our homes, at our convenience— yet we fail to grasp it. Let’s take a look at the Sahabas who always demonstrated the utmost level of dedication and perfection in the religious matters. These are the best of followers, as proclaimed by Prophet (saws).

Ibn Abbas (ra)’s quest for knowledge was such that even though he was the cousin of Prophet (saws), he went to the houses of the Sahabas to learn. If he found any Sahabi was sleeping he would sit outside the house and wait for hours, until his face and body would be covered in dust.

The well-known personality Abu Hurairah, who has narrated more than 5000 ahadith, also had an amazing sense of dedication in his knowledge seeking. Unlike the other Sahabis, Abu Hurayrah (ra) didn’t go out into the market to earn a living.

He chose to live in the Prophet’s mosque as part of Ahl-as-suffah (a shelter made for migrants and guests of Islam who dedicated their lives to learning from the Prophet). There would be times when he would be so hungry that he would tie a rock around his stomach to alleviate the hunger pains. He went through this pain only to spend most of his time in the company of Prophet (saws), acquiring knowledge from him.

Praise be to Allah (swt), such was their dedication. Today we can’t even imagine being anywhere near to this level. In fact it’s a shame that although the sources of knowledge are present just “clicks” away from us, we’re too heedless and indifferent to pursue it.

The Transformation Of A Prison Into A University

The importance of knowledge was also emphasized by Sheikh ul Islam Ibn Taimiyyah when he turned his place of imprisonment into a university. His efforts toward educating the prisoners and nurturing them were to the extent that the dissemination of knowledge and religion within the prison excelled certain institutions outside the prison.

He also wrote various books and papers in the prison on matters concerning Islam. He turned the miserable condition of imprisonment into the blessing of imparting knowledge.

Al-Quran– An Ocean Of Knowledge!

With regard to knowledge, the Quran is not a sea, but rather “oceans of knowledge.” Each verse, and each word and its placement is a miracle. How unfortunate are those who never get to see or experience this miracle.

If we knew a miracle was about to happen in the street, the entire community would gather to witness it (as happens with astronomical sightings). But we have a much greater miracle sitting on our shelves. Open it, and reflect on it!

As Bishr bin as-Sirri said: Verily, each verse is like a date: the more you chew it, the more of its sweetness is released.” Abu Sulayman heard this and commented: True. It is the case with one of you that if he begins one chapter of it, he wants to read it to the end.

Don’t let another day pass without making an effort to learn Arabic and delve deep into the meanings of the Quran. It’s a blessing of Allah (swt)that today we don’t have to travel far off to seek knowledge or browse through many books to find a single hadith. All courses and sources are clicks away.

All that’s required is just an hour or so from the 24 hours of health and prosperity with which Allah (swt) blesses us each day. Just make the intention, ask Allah’s help and start the journey.

I myself am doing the 70% Quranic words course and it gives me immense happiness when I can actually roughly translate the Quranic verses myself. I’m eagerly waiting for this Ramadan’s taraweeh, when I will no longer be standing like a statue understanding nothing, in shaa Allah.