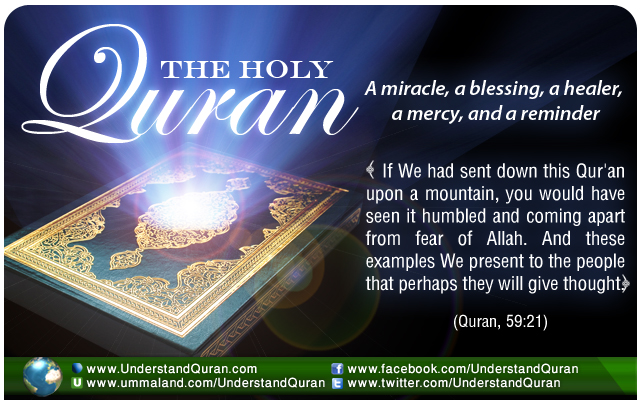 In the name of Allah, The Abundantly Merciful. The Always All Merciful—

All perfect praise be to Allah alone; peace and blessings of Allah be upon His messenger, his family, his companions, and those who follow his guidance.

A Remembrance And A Reminder

Allah (swt) often uses the word “dhikr”- remembrance- a reminder, to describe the Quran. Reciting the words of wisdom over and over again brings much benefit in remembering our creator and is a great form of worship.

The prophet (saw) said, The person who is proficient with the Quran is with the angels, those that are close to Allah and those that are obedient to Allah. As for the person, who reads the Quran, though it is difficult for him and though he stutters, he has two rewards. [Buhari/Muslim]

And he (saw) also said, Whoever reads a letter from the Book of Allah, will receive a good deed from his recitation, and the good deed is multiplied by ten. I do not say that Alif Laam Meem is considered a letter in reward, rather Alif is a letter, Laam is a letter and Meem is a letter. [At-Tirmidhi]

Although different voices and different styles of recitation can have varied impacts on the listener, correct recitation of the Quran with its pauses, elongations and due right given to each letter has a profound effect on us, reader and  listener alike. This was just the way the revelation was transmitted, and the manner in which every Muslim is obliged to recite, as Allah (swt) says: . . . And recite the Qur’an with measured recitation. [Quran, 73: 4]

Little surprising then that the Makkan Qureish attributed the Quran to be magic of a powerful sort, for indeed they were moved and touched by its beauty of composition and flow of recitation. It was their arrogance and stubbornness that kept them away from fully comprehending the truth.

Allah (swt) says: Establish prayer at the decline of the sun [from its meridian] until the darkness of the night and [also] the Qur’an of dawn. Indeed, the recitation of dawn is ever witnessed. [Quran, 17:78]

Prophet (saw) said: The angels of the night and the angels of the day come amongst you in successive groups (in shifts). They meet at the Morning Prayer (Fajr) and at the Mid-afternoon prayer (‘Asr). Those who stayed among you at ascend, and their Lord asks them, although He knows best about you, “How did you leave My servants.” They say, “We came to them when they were praying and we left them when they were praying. [Bukhari/Muslim]

Don’t we all want to be reported to our supreme master in the best possible way?  And that too by more than just one group who report us to our Lord? The two armies of angels meet at Salat Al-Fajr; one group ascends while the other stays. Quran recitation- reading, learning, contemplating, in the mornings is ever witnessed by both these groups. But, sadly, for many of us, our relationship with the Quran ends with the morning readings.

Quran certainly is the most read book. Yet the true purpose of revelation as Allah (swt) repeatedly states is to know the truth as truth and to abide by it.

Man is created on the instinct of recognizing the truth. We learn from the Quran that the children of Adam have all borne testimony to this. (Quran, 7: 172).It is in our fitrah or natural state to know our Creator and fully submit to Him from birth, just as a newborn suckles instinctively.

Allah (swt) says: ‘So direct your face toward the religion, inclining to truth. [Adhere to] the fitrah of Allah upon which He has created [all] people. No change should there be in the creation of Allah . That is the correct religion, but most of the people do not know.”. (Quran, 30:30)

This deen was not brought afresh by successive prophets, but each of them was sent by Allah (swt) to remind and rekindle man’s original nature. We will not find inner peace unless we return and adhere to the state of our original being which in fact is the reality.

Prophet said’ No child is born except in a state of fitrah, then his parents make him a Jew or a Christian or a Zoroastrian…….” (Bukhari/Muslim)

Man is also forgetful by nature. Forgetfulness is embedded in the word ‘Insaan’ – Arabic for man, which leaves us little to argue of the nature and psyche of the human mind.

Today’s fast paced life forever takes us away from our true purpose of existence. Those who claim that the Quran often repeats itself in verses and messages need only to know that man needs to be constantly reminded and pulled back from worldly delusions and fantasies towards goodness and truth.

Allah (swt) has already promised: “And We have certainly made the Qur’an easy for remembrance [and understanding], so is there any who will remember? “ [Quran, 54:32]

Do we have any argument then, except to live up to Allah’s promise?

And Allah (swt) assures:”…And when guidance comes to you from Me, whoever follows My guidance – there will be no fear concerning them, nor will they grieve.” (Quran, 2: 38)

Prophet (saw) said, “…I have left among you the Book of Allah, and if you hold fast to it, you would never go astray…” (Muslim)

It is our life’s priority to learn what the Quran says, to discover the true purpose of Allah’s revelation- Read, Reflect and Remember its beautiful gems and abide by its every command without biases and prejudices.