The Children of Israel in the Quran: Learning about Banu Israel 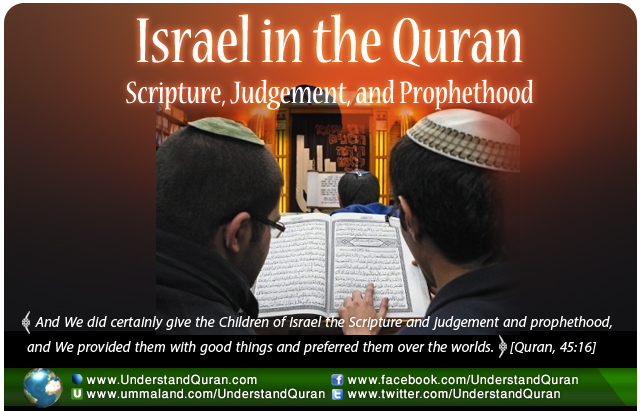 However, due to current political circumstances, many Muslims have a tendency to regard all Jews as inherently “bad,” and often they will refer to the Quran in order to prove this point of view, for example: “The Quran says Jews were always killing their prophets and doing shirk. They corrupted their scriptures, and they refused to accept the Prophet Muhammad ﷺ even though they knew he was a prophet. They are so bad— look at what they are doing to our brothers and sisters in Palestine!”

Let’s have a look at how much of this is true and what the Quran really says regarding Banu Israel.

The Origin of Banu Israel

The Banu Israel are called by this name because Israel was another name for the Prophet Yaqub (Jacob), and from his twelve children came the twelve tribes that constituted Banu Israel. After Yusuf (as) became the minister of Egypt, his whole family migrated there.

So the origin of Banu Israel starts from Egypt. They were living there peacefully until the pharaohs took them captive. They were treated like animals, and their children were killed and women taken. Allah (swt) mentions these horrible trials of Banu Israel several times in the Quran, and Allah Himself says, ‘And in that was a great trial from your Lord.’ [Quran, 2:49]

Then Musa (as) saved the children of Israel from the hands of Pharaoh. Again this story is narrated in the Quran in several places.

And the good word of your Lord was fulfilled for the Children of Israel because of what they had patiently endured. And We destroyed [all] that Pharaoh and his people were producing and what they had been building. [Quran, 7:137]

The Banu Israel suffered unspeakable tortures, and, enduring all of it, remained believers. Allah (swt) honoured the Banu Israel by choosing them to be His special slaves.

And We did certainly give the Children of Israel the Scripture and judgement and prophethood, and We provided them with good things and preferred them over the worlds. [Quran, 45:16]

Why would Allah (swt) choose a whole nation of “bad” people to be His special slaves? The fact that Allah (swt) made them special proves that there was something special about them. Allah (swt) highlights this point in the following ayah:

And We certainly chose them by knowledge over [all] the worlds. [Quran, 44:32]

Although as we know all of the messengers (saw) of Allah (swt) were Muslims, most of the prophets who came after Abraham, Isaac, and Jacob were of Jewish descent, an exception being Prophet Muhammad ﷺ.

Dawud (David), Sulayman (Solomon), Yahya, Zakariyah, Jesus, and many more were all Muslims of Jewish descent. And they certainly were exemplary human beings, peace be upon them all.

The Criminals among Banu Israel mentioned in the Quran

There were those among Banu Israel who committed shirk (associating partners with Allah), killed prophets, and changed scriptures. Allah says about them in the Quran:

Cursed were those who disbelieved among the Children of Israel by the tongue of David and of Jesus, the son of Mary. That was because they disobeyed and [habitually] transgressed. [Quran, 5:78]

By the time of our Prophet ﷺ, Jewish scriptures had become corrupted, having been lost once, then “found” again in the Temple after about a hundred years, then lost again and re-written after another gap. All these are facts acknowledged by historians.

The Rabbis had exclusive control over all scriptures and religious affairs – they in fact decided what was right and wrong for the generally ignorant masses. So when the Prophet came, these Rabbis felt threatened with the loss of their religious power and opposed him. The masses in general followed their Rabbis.

But there were exceptions. There were people of Jewish descent, even one Rabbi, who became Muslims and companions of the Prophet. One of the Mothers of the Believers was a pious Jewess who converted to Islam and married Prophet Mohamed (saws).

The people who are oppressing Palestinian Muslims are not the only Jewish people in the world. They are a group who call themselves “Zionists.” Before their coming to Palestine there has never once been a battle between Banu Israel and Muslims in the whole history of Islam of fourteen hundred years.

These Zionists were in fact opposed by Jews who didn’t want to create problems with Muslims. There are still many Jews who do not support the state of Israel.

Why are the Children of Israel mentioned so often in the Quran?

The Banu Israel are mentioned so often in the Quran because they are the closest in resemblance to the Muslims. They are our biological, geographical, and spiritual cousins. A lot of their mistakes are highlighted in the Quran.

Why? So that we learn from them and don’t make the same mistakes. Aren’t there those who claim to be Muslims who worship graves? The Quran is protected by Allah from corruption, but aren’t there Muslims who tell lies about religion and attribute those lies to the Quran?

Aren’t there Muslims oppressing other Muslims? Aren’t Muslims being humiliated all over the world because of what their own hands have earned? We were chosen by Allah (swt) just like the Banu Israel were chosen, and we are making the same mistakes that they made to lose Allah’s favour on us.

The fact that Jews are addressed directly so often in the Quran should tell us something. Allah (swt) wants us to address Jews, to give them dawah, to give them the Quran, instead of having stereotypes about them. Islam doesn’t allow stereotypes.

Everyone is equal in the eyes of Allah (swt), and the only thing that makes some people better than others is Taqwa.

* To understand Quran better, learn 50% of Quranic words in 9 hours.