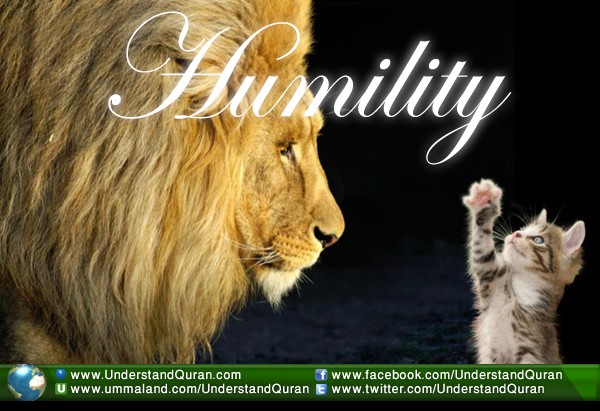 The term “humility” comes from the Latin word humilitas, which derives from the word humus (earth). Thus, the basic meaning of humility is “grounded” or “from the earth”.  Humility is the quality of being humble, verifying that the individual is firmly grounded in knowledge of self – neither arrogantly elevating nor submissively lowering one’s perception of self.  When we Muslims pray, we prostrate ourselves to the ground, a symbolic acknowledgement of our lowliness only in relation to our Lord, our absolute humility before Allah (swt).  ‘Amr b Sa’id b al-As reported: I was with Uthman that he called for ablution water and said: I heard Allah’s Messenger (saws) say: When the time for a prescribed prayer comes, if any Muslim perform ablution well and offers his prayer) with humility and bowing, it will be an expiation for his past sins, so long as he has not committed a major sin; and this applies to for all times. (Muslim)  This is self-confident humility, deriving from the fundamental sense of self that Islam implants in the heart of the Muslim.

Humility in the Qur’an

The primary word appearing in the Holy Qur’an that conveys the idea of humility is khasha’a. Another word appearing less frequently is tad’a.  Among the passages based upon khasha’a are: Successful indeed are the believers, those who humble themselves in their prayers. (23:1-2); Has not the time arrived for the believers that their hearts in all humility should engage in the remembrance of Allah and of the Truth which has been revealed to them… (57:16, part)  Among the passages based upon tad’a are: Before thee We sent (messengers) to many nations, and We afflicted the nations with suffering and adversity, that they might learn humility. (6:42); Call on your Lord with humility and in private, for Allah loves not those who transgress beyond bounds. (7:55)

The Objects of Humility

The Quran describes worship as Ibadah.  Uubudiyyah, the root of which is Ibadah means to express ones humility. Ibadah is the absolute sense of humbleness that is reflected by the individual who totally submits her of himself to the will of Allah (swt). Worship requires submission to God; the essential component of submission is humility.  Although humility in relation to Allah (swt) is absolutely necessary, it is not sufficient for the Believer who wishes to please Him.  When the Prophet Muhammad (saws) ascended As-Safa mountain for his first address to the members of his tribe, the following Ayat was revealed to him: And be kind and humble (Muhammad) to the believers who follow you. (26-215) As a testimony to the fact that this command was to be followed by all Believers, ‘Iyad bin Himar said: The Messenger of Allah (saws) said, “Verily, Allah has revealed to me that you should adopt humility. So that no one may wrong another and no one may be disdainful and haughty towards another.”  (Muslim)  Showing humility does not lower the individual in the eyes of thinking people.  Abu Huraira reported Allah’s Messenger (saws) as saying: Charity does not in any way decrease the wealth and the servant who forgives, Allah adds to his respect, and the one who shows humility Allah elevates him in the estimation (of the people). (Muslim)

What Humility is Not

What is the opposite of humility?  The following ayat respond to this question: And the (faithful) slaves of the Most Gracious (Allah) are those who walk on the earth in humility and sedateness, and when the foolish address them (with bad words) they reply back with mild words and gentleness. (25:63) And walk not the earth with conceit and arrogance.  Verily, you can neither rend nor penetrate the earth, nor can you attain a stature like the mountain in height. (17:37)  Invoke your Lord with humility and in secret. He likes not the aggressors. (7:55)

Is the humble Believer timid?  The following ayah pertains: It was narrated that Abu Hurairah said: “I heard the Messenger of Allah (saws) say: ‘The parable of a Mujahid (Believer engaged in what one believes to be a Jihad) who strives in the cause of Allah – and Allah knows best who in His cause – is that of one who fasts, prays Qiyam, focuses with proper humility, bows and prostrates.'” Sunan an-Nasa’i

Is fear a component of humility?  Only in relation to Allah and the Day of Judgment!  “And give glad tidings to the humble.  Those whose hearts, when Allah is mentioned, are filled with fear, who show patient perseverance over their afflictions, keep up regular prayer, and spend (in charity) out of what We have bestowed on them. (22:35)  And the Day on which the Trumpet will be blown – and all who are in the heavens and all who are on the earth, will be terrified except him whom Allah will (exempt). And all shall come to Him, humbled.

The Breadth of Humility

The Holy Qur’an.  Allah (swt) states: And that those who have been given knowledge may know that it (this Qur’an) is the truth from your Lord, so that they may believe therein, and their hearts may submit to it with humility. And verily, Allah is the Guide of those who believe, to the Straight Path. (22:54)