Hubby, I Want an Ice-cream, Now! 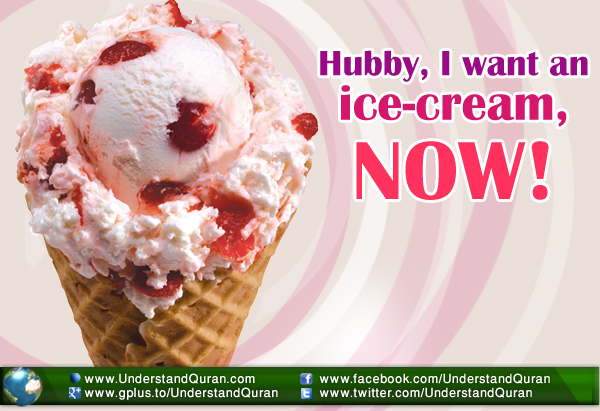 I’ve been happily married for a year and a half to a man who’s truly my soul mate!  In our daily lives I make it a point to  guard against Satan by consciously noticing how he tries to creep into our lives.  Alhamdulillah, hubby and I have never had a major argument with each other, but I’ve noticed Satan trying to blow petty things out of proportion to sour our relationship.  Consider the following conversation:

Me: I want an ice-cream.

Me: You always seem to have an excuse whenever I ask for ice-cream. How much time does it take to buy one scoop ?

Hubby: Ok, fine. You never listen to me. Let’s go.

Petty, right?  Yet I can see Satan creeping in. Making his way. Burning our bridges.  Building walls between us. But alhamdulillah, we usually bring them down before he  builds them up.

Next time you’re fighting with your spouse, take a deep breath, pause, and see if you can hear the insinuating whispers of Satan.  When his involvement becomes clear, make sure you win and Satan loses. The fight is actually between you and Satan, not between you and your spouse!

The husband-wife relationship is one of the most valued relationships in our religion. It’s so strong yet so fragile. Sometimes it can be like being on an emotional roller-coaster.  A small comment or action from one spouse is enough to tick off the other.  Minor arguments can be destructive to both partners, to their children, and to all around them, and major fights can lead to devastation.

For example, your baby catches a cold the next day. Hubby goes to work with the argument still fresh in his mind and the negative energies radiate from his body; nothing works for him and the whole day is ruined. Back home you get a headache.

You didn’t bang your head against a wall, did you? Nope— it’s your negative energies playing the trick. How much does it take to settle the argument before leaving the place, saving yourself and others all that trouble? Silence your ego and make peace.

Dig down deep and try to re-call what you were thinking the last time you fell ill.  Negative thinking is a killer.  It significantly raises the blood pressure, weakens the immune system, and results in stress and fatigue.  Research tells us that 90% of the deadly diseases are caused by stress.  Couples who fight often (and consequently live in a field of negative energy) are more likely to suffer from high cholesterol, skin wrinkles (ladies alert!) and increased appetite.

On the other hand, deeply passionate marriages reduce stress, create more happiness, and decrease the chances of catching deadly diseases. Therefore it would be better if (at least some of the time) we minded our own business and stopped spying on each other. The more you let go, the sooner things fall into place. A good marriage is an excellent healer.

Projecting Our Own Weaknesses

Often the habits of our spouses that frustrate us the most are the most salient features of our own characters. We tend to ignore our own shortcomings while blowing another’s out of proportion.  The result is that we end up popping painkillers with our heads buried in our pillows.

The marriage relationship is the cornerstone of the Muslim family and society.  It’s at the top of  Satan’s hit list.  The Quran speaks about Haroot and Maroot who used to teach Satanic skills to the Israelites of Babylon.  They taught them a special kind of magic— the magic that creates separation between husbands and wives.

And [yet] they learn from them that by which they cause separation between a man and his wife. But they do not harm anyone through it except by permission of Allah. And the people learn what harms them and does not benefit them.
[from Quran, 2:103]

A Hadith is also very explicit about this issue. Jabir reported that Allah’s Messenger (may peace be upon him) said: Iblis places his throne upon water; he then sends detachments (for creating dissension); the nearer to him in rank are those who are most notorious in creating dissension. One of them comes and says: I did so and so. And he says: You have done nothing. Then one amongst them comes and says: I did not spare so and so until I sowed the seed of discord between a husband and a wife. The Satan goes near him and says: You have done well. A’mash said: He then embraces him. [Sahih Muslim, Hadith 5032]

Don’t Separate Your Marriage From Your Religion

Your marriage can’t be alienated from your faith. Weak marriage is often a result of weak faith. When you fight with your spouse, it’s not your spouse who’s your enemy— Satan is your mutual enemy.  He wants you to have troubles upon troubles, a simple conflict creating a powerful negative field, leading to physical ailments leading to you circumambulating hospitals leading to the pharmacy leading to hard-earned money going down the drain leading to Allah–knows-what-else.

The simple conflict isn’t so simple.  It’s a labyrinth of evil that engulfs us and leaves no room to break free.

Is there a way out?  I’m not suggesting that having conflicts with your spouse is abnormal.   What is important is to maintain peace and calm and an attitude of mutual respect at all times and to resolve these conflicts quickly and amicably in the spirit of Quran and sunnah.

Observe Satan trying to come in, and slam the door in his face. Here’s how:

2). Give your spouse a big tight hug. Hugging releases a feel-good hormone called “oxytocin”. For those of you who haven’t done it for a long time, it may seem weird but give it a try and see the massive pleasure and joy it brings to your marriage.

3). Rekindle marriage as an act of worship. Even intimacy with your spouse brings reward to you.

4). Surprise him as he comes home by making his favorite dish. Tell her that she looks beautiful.

5). Communicate passionately and lovingly. Don’t make it a battleground.

May Allah allow us to follow His commandments and bring more joy, passion, and happiness to our marriages.

Share below your ways of surprising your spouse.  (I’m talking about pleasant surprises!)
Bela Khan is a writer, speaker, and Muslim Women Empowerment coach. She is the founder and CEO of Muslim Women Empowerment. She helps visionary and mission-driven women to come out of their own conditioning and move past their obstacles to create a ripple of positive difference in the world with their Allah-given talents and gifts. She can be reached at muslimwomenempowerment@gmail.com