How the Month of Rajab Can Make You More Productive 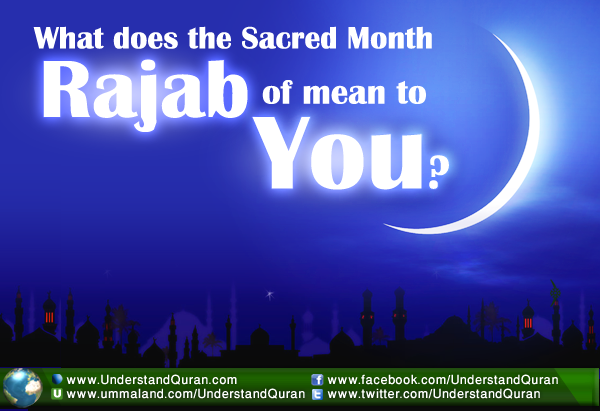 A beautiful aspect of Allah’s power is that He chooses and selects whatever He wills. Allah ‘azza wajal says about Himself: And your Lord creates whatsoever He wills and chooses. [Quran, 28:68]. The attribute of choosing shows the perfection of His wisdom, knowledge and power.

Allah subhanahu wa ta’alaa has chosen four months to be sacred. Did you know that we’re in one of those four months right now?

The Prophet salallaahu ‘alayhi wa sallam said: O People! Time has gone back to how it was at the time Allah created the Heavens and the Earth. A year has twelve months, four of which are sacred, three consecutive, Dhul-Qi’dah, Dhul-Hijjah, Muharram, and Rajab. [Al-Bukharee]

Now the next question is: what does this mean to you? Let’s get ready to find out what you can do to benefit in the Sacred Month of Rajab! First we discover some interesting facts about this time of the year followed by some amazing spiritual productivity tips for you to apply right now insha’Allah!

In this week’s central ayah Allah ‘azza wajal instructs us: Verily, the number of months with Allāh is twelve months (in a year), so it was ordained by Allāh on the Day when He created the heavens and the earth; of them four are Sacred. That is the right religion, so wrong not yourselves therein. [Quran, 9: 36].

Some Interesting Facts About Rajab

Ibn Faaris said, “The letters Raa-jeem-baa form a root which indicates supporting and strengthening something with another thing. It was called Rajab because they used to respect it.”

The month of Rajab is also called Rajab Al-Haram (Arabic for: “the Sacred Rajab”), because it’s one of the four sacred months, during which fighting is prohibited. It’s also called Rajab Al-Fard (Arabic for: “the Solitary Rajab”) because it’s separated from the other three successive sacred months (Dhul-Qi`dah, Dhul-Hijjah and Muharram). Rajab comes five months after them.

Rajab also witnessed Al-Israa’ wa Al-Mi’raaj, the miraculous night journey with which Allah ‘azza wajal honored the Prophet, peace and blessings be upon him.

During the Jaahiliyyah the Arabs used to slaughter a sacrifice during Rajab as an act of worship towards their idols. When Islam came people were taught that sacrifices were to be offered only to Allah, alhamdulillah for our logical deen!

Are You Conscious of Your Actions?

Rajab (and the other three months) are called sacred for two reasons: 1). Because fighting therein is forbidden unless initiated by the enemy; and 2). because transgression of the sacred limits therein is worse than at other times.

In this week’s central ayah Allah says (interpretation of the meaning): so wrong not yourselves therein.

Wronging yourself refers to committing sins and having wrong belief.  So why should we pay attention to the sanctity of these four months? Because Allah selected them for a special status and has forbidden us to commit sins out of respect for their sanctity.

Sins committed at this time are even worse, even though committing bad deeds is forbidden during the whole year! We honour whatever Allah and the Prophet honour.

So this ayah shows you the importance of being an alert and active believer. The only way you can make sure you do not wrong yourself is to be conscious of your deeds. How many times do we “relax” and loosen up in our worship?

Let’s use these sacred months, given to us by the Creator of time, to take account of ourselves! Think about the state of your heart. Reflect on your life and deeds. Have I been aware of what I’ve been saying and doing to others? What is my relationship with the Quran? Have I given any priority in my life to learning and understanding it?

Another thing is that the month of Rajab comes at an extremely important time of the year for you. It means that Ramadaan is near! While some specific acts of worship in Rajab are disputed (like specific prayers and duaa’, or singling out this month for visiting graves), you can do many good deeds to benefit and prepare for your favorite guest: Ramadaan!

6 Spiritual Productivity Tips to Help You Benefit From This Month

2.      Seek forgiveness, and forgive!
Remember: don’t wrong yourself. We all sin. Strive for a tawbah nasoohah— a sincere repentance. Ask Allah ‘azza wajal to forgive you, so you can start Ramadan with a heart that feels light and strong enough to worship well. Also, try to forgive others for the wrong they’ve done you so your heart won’t have grudges or ill-feeling and will free to enjoy worship in Ramadaan!

3.      Fast some extra days.
There’s no authentic narration from the Prophet nor sahaaba stating that there’s a special virtue in fasting in Rajab. The same fasting is prescribed as in the other months, e.g. Mondays and Thursdays and the three days of al-Beedh (the mid three days of the lunar month) or fasting alternate days. There is no better way to prepare mentally and physically than to fast some extra days. So if you’ve never fasted on Monday or Thursday, start at least with one day a week!

4.      Deprive yourself.
Start training yourself to resist by not indulging in things your nafs desires. Have a simple dinner over the weekend, for example, or avoid biscuits and sweets for a change. This will set the tone for you to control your nafs in Ramadaan.

5. Think about your charity.
In this sacred month do charitable deeds consciously and with the intention to please Allah. Think about good deeds you can do. Help someone, cook for someone, give a compliment, make your mother smile, and even trying to stay away from a bad habit (like watching too much television)!

6.      Make dua.
Ask Allah for His forgiveness and to bless us to reach Ramadan and benefit from this month and Sha’baan after it in preparing for it effectively. Ask Allah to accept your past Ramadans.

A Beautiful Note On Choosing: You Have A Mission!

Remember how beautiful Allah ‘azza wajal selects with the greatest wisdom? He chose His messengers, His books and . . . He chose you! Allah says:  He has chosen (selected) you (Muslims). [Quran, 22:77]

He gave you the privilege to say: la ilaaha il Allah! Allah did not just choose you; there’s a reason why He selected you. He saw in you something that could fulfill the mission of this ummah. The majority of those on earth are not chosen, but you’re part of the small selection when you submit yourself to Him.

This is both a great honour and a great responsibility!

Allah tells us: so that the Messenger is a witness against you, and: and that you all are witnesses against mankind.

Not only the Prophet, but we will also be proof and witness against humanity according to how well we fulfill our mission. And what is our mission? It is to share and convey the message of Islam to others!

The Understand Quran Academy has the mission to spread the message of the Quran, so let’s make special dua together:
O Allah, grant us the strength and steadfastness to make us successful callers to Your Deen, ameen!

P.S. A special note on choosing: a great prepration for Ramadaan is starting your own Ayah Journal asap! Choose one ayah and make it your mission of the day. Believe me, you’ll see the change in your life and your relationship with Allah and His Beautiful Book. Check the Ayah Journal link below!