How I Came to Islam, Part I 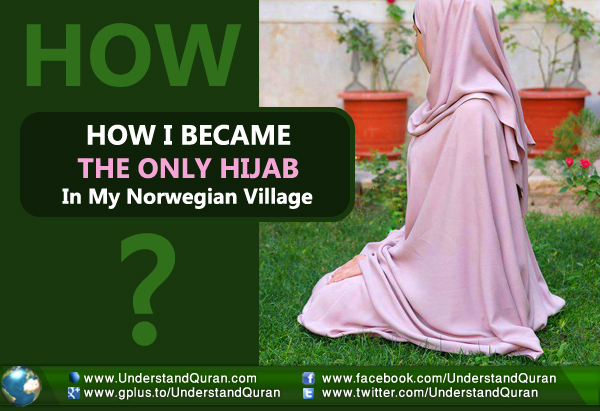 I once heard a Muslim explain his religion like this: “Islam is a relationship between you and the Creator— after you get to know Him”. For me, born and raised in a Christian family in a small town in Norway— with seven different churches and no mosque–  then accepting Islam at the age of 19, this was the perfect explanation of my new religion.

While growing up I never questioned my religion. My parents and all family members were Christians. We prayed in the evenings, I went to Sunday school every now and then, Christmas was my favorite time of the whole year, in school we used to sing a song to thank God for the food, and the religion subject was called “Christianity: Religions and Views of Life”.

Practically everyone around me believed in Jesus Christ (pbuh) as the Son of God and their savior. So being Christian was really just a matter of course; it was natural – the way it should be.

Looking at My Own Skin

Still, there were a few incidents in my early years that made me consider the fact that there could be something “more right”. First of all, I remember learning about imperialism. These white men were invading the countries of black people and behaving like they were superior and masters of the other human beings. It didn’t make sense.

I was looking at my own skin and my mom’s and dad’s. We were all white. I couldn’t understand how people like us could treat others like animals just because they had a different skin color. For this reason I thought to myself, Maybe we aren’t right. Maybe there is another group of people in this world doing things differently and more correctly than us (I must admit that I imagined this other group to be an unknown tribe in the middle of the rainforest).

The other incident was a very brief article about some teenagers explaining what their purpose in life was. Some said surfing, hanging out with friends, just having fun, etc. But the one that made the strongest impression and got stuck in my mind was: “The purpose of life is to find it”. From that day on (and I was just a child, maybe 10 or 11) I didn’t have any special opinion of what the purpose of life might be. Nevertheless, I was certain I would find it.

In spite of this, I never turned my back to Christianity. I believed in God, and Christianity was all I knew about Him. All my teenage years I considered myself a Christian. At the age of 15 I was confirmed in a Protestant church, with the firm conviction that I had done it for the sake of God and in order to confirm my faith.

For me personally it was very important to have the right intentions, because in Norway (at least in my hometown) practically everyone confirms when they reach this age. And there’s a lot of money involved. I never liked that money played such a big part of the ritual. It only caused friction, jealousy, and ironically, ingratitude, because those getting the most money didn’t exactly keep quiet about it.

The Grumbling of Comfortable People

That’s what’s funny about Norway. Most people have far more than they need— all kinds of possibilities, an amazing health system, and the list goes on and on. Still, we complain like we’re the the most unfortunate people in the world. I was always thinking that we should look at those with less, rather than at those with more.

Seeing My Thoughts in the Writings of the Prophet (saw)

This was actually one of my reasons for coming to Islam. I read a hadith of the Prophet Muhammed (saw) saying the exact same thing– in a different wording– and I was just amazed to find my thoughts written down (but this wasn’t until some years later).

It was when I first turned 18 (in June 2010) that I started reflecting on essential questions. Every day for a whole week (summer vacation had just begun) I went down by the river or some other nice place by myself, with a pen and some paper. I thought a lot about life, why I was created, God, what my future would bring, and what I would teach my kids if I were to get married and have children.

The last one was actually just a dream I didn’t believe would come through. But still I realized that if it did happen, I needed to know what to tell them. I needed to have a clear sense of the purpose of life so that I had something valuable to share with them. I wanted to be able to make them confident, independent human beings, who would have a positive impact on people and the world.

It was a very interesting week, but then it stopped. I got caught up in things people normally do; I met friends, drove around on my scooter, went swimming, and pretty much just enjoyed the vacation.

In August I met two people who made a huge impression on me. One of them was a beggar sitting on a busy bridge with nothing more than his clothes, a paper cup, and a broken umbrella. It was a very cold and rainy day, and I was just passing by on my way to buy some food. Due to travelling I was quite hungry myself.

But after passing him the second time and then starting to eat my calzone, my guilt just grew and I couldn’t eat more. So I decided to go out to him again and offer him the calzone and a bottle of water.

I was thinking I would do him a little favor, but he actually did me a bigger favor. The gratitude he expressed and showed me for that little piece of food was way beyond anything I had ever seen before. It wasn’t just his words saying: “Thank you very much!” It was his whole body, his face, his eyes, his smile. You could see he was truly thankful.

The other person was a 93-year old friend of my grandmother. Of course she noticed that her body, sight, and hearing weren’t functioning as well as they used to, but over and over again she told me the reasons for her happiness and gratitude. Most of all she was extremely grateful for being alive.

Due to these two persons, I would end every single day thanking God for the blessings in my life. I would not sleep without mentioning many of the things I was grateful for.

You could say I was a very grateful Christian.
(To be continued next week in shaa Allah)