Holding the Quran in Your Mind: What it Really Means to Be a Hafidh 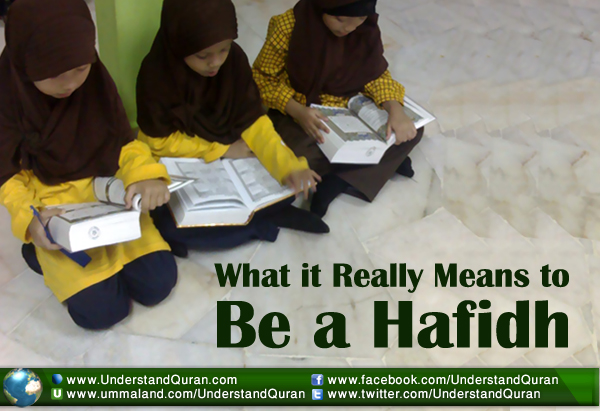 As my brother completed his tahfeedh (hifz, or memorization of the entire Quran) last week, I was inspired once more to write about what it truly means to hold this position, both in the eyes of the people and of the Lord.

Not a Minor Role

Make no mistake; being a hafidh (one who has memorized the entire Quran) is no small thing. They are, after all, the ones who hold the words of Allah (swt) in their bosoms and who’ve been chosen to carry out the promise that the Quran will always be preserved.

To hold the Quran in one’s mind is one of the greatest honours in this world and the hereafter. The hafidh is to be respected, and his position must be recognized by people because it’s recognized by Allah (swt).

Climb the Ranks of Jannah!

There’s a hadith that states that the hafidh will be called forth on the Day of Judgment and that Allah (swt) will tell him to read from the Holy Book and climb the ranks of Jannah as long as he recites. Then he’ll take ten people with him into Paradise. Ten people! We must struggle and toil and work to merely save ourselves from Hell, yet the hafidh has the ability to save ten people and grant them reprieve.

How sad it is, then, that the huffadh are often degraded and looked down upon in many countries. Parents send their children to institutions not because of the honour and nobility of the memorization of the Quran, but to escape the harshness of poverty. What a far cry from the time when huffadh held posts and pedestals and were treasured as they ought to be.

Conduct Worthy of a Vessel of the Quran

There is, of course, a flip side. To be respected by people and loved by Allah, the hafidh must first respect themselves. They must realize that they’re not normal people and so must not act as such.

The same mouth that freely recites the words of God may not then spew vulgarity and lewdness. The hand which flips page after page must not harm a fellow human being. The mind that holds this treasure can’t host ill thoughts. The road of a hafidh is a perilous one, for the danger of ruin is just as high as the potential for greatness.

To move forward— to become a hafidh in the truest sense of the word— one must not confine the Quran to his brain as he would math or science but rather allow it to emanate through his heart, his soul, his very being. It must govern his life and actions.

He must reflect the Quran and the Quran must reflect him. Then and only then does the full realization and gravity of the undertaking strike, and there are few things more powerful. The teacher of Imam Shafi’i (RH) told him once, when he was having trouble memorizing, to abstain from sin.

To put the glorious message of the Quran into practice, the mind and the heart are necessary.