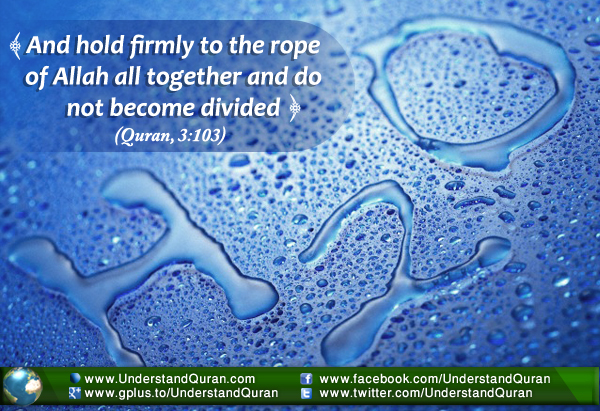 Turn the tap on and watch the water fall in one sheet of infinite glamour.  Do you see the sparkling light woven into its flow? Do you feel its peaceful coolness and hear the flow of its unified motion?

Remember that science lesson at school, when you learned about the structure of atoms? Together atoms form molecules, and molecules form objects. Millions of water molecules flow together as one, giving us the brilliant liquid we call water.

SubahanaAllah. Indeed, in water we see so much. It would be almost childish to even venture on the task of explaining the uses of water. Then there’s all its power! Immense! Remember the Tsunami? Can we even imagine that it was the brute force of tiny united water molecules that created it?

Look around you. What do you see? Tall trees? Mountain giants and spreading beaches? Cars and buses? Flowers and children? Look beneath the material. Gather the strength of your mind’s eye and focus. Focus hard. Now what do you see? The basic structure of things? The fundamental concept behind  creation? The system of atoms and molecules? Formation of a material in unison?

Yes— unity. Bound by one common purpose they form a material. Interwoven between them is the truth of their creation, the purpose they’ve been created to serve. There’s sheer power in unity; there’s immense potential, blood, and even life in unity. Every creation is bound by this fundamental truth; the most basic structure— the atomic structure— is the proof.

Bound By a Universal Law

And hold firmly to the rope of Allah all together and do not become divided. And remember the favor of Allah upon you – when you were enemies and He brought your hearts together and you became, by His favor, brothers. And you were on the edge of a pit of the Fire, and He saved you from it. Thus does Allah make clear to you His verses that you may be guided. [Quran 3:103]

As long as you hold fast to two things which I have left among you, you will never go astray: Allah’s Book (i.e. the Qur’an) and the Sunnah of His Messenger. [Reported by Al-Haakim – Sahih].

The Creator alone is One. Only He can stand alone. We His creations are bound by this universal law of unity. Humanity is bound by this rule. The Nation of Allah (swt) is meant to live by it.

Are we living by it? Ask yourself, Where do I stand with this law? Am I a part of it? Am I serving it? Am I helping to hold on to the rope of Allah (swt) and His Apostle (saws) so that we stand together with power?

(Binth Niwas is a young writer and student from the University of Peradeniya, Sri Lanka.)