Doing Good From Dhul Hijjah and Beyond 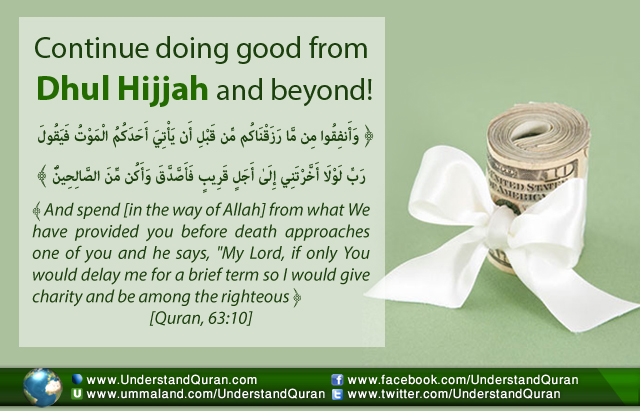 What comes after the ten blessed days of Dhul Hijjah?

Did you do your best the first ten days of Dhul Hijjah, benefiting from the time good deeds are most beloved to Allah ‘azza wa jall? Guess what? A sign of Allah accepting your good deeds is that He enables you to continue doing them. All year round.

Even though a set of truly blessed days have come to an end, it’s time to realize that each day is a blessing and should be seized. Let’s find out about some virtuous deeds you should continue doing until the very end!

Allah ‘azza wa jall says: And spend [in the way of Allah] from what We have provided you before death approaches one of you and he says, “My Lord, if only You would delay me for a brief term so I would give charity and be among the righteous [Quran, 63:10]

6 ways to gain rewards all year around

1. Thank Allah for each new day
Did you even thank Allah for making you witness the ten blessed days of Dhul Hijjah?
How can you thank Allah? By doing those things  through which you can attain maximum benefit and reward. And to do those deeds the most beautiful, beloved, respectful and humble way. This is what ‘ibaadah (worship) is. So make it a habit from now, to thank Allah for each new day you witness.
Action:
Say this dua when you wake up:
الحَمْدُ لِلهِ الَّذِي أَحْيَانَا بَعْدَ مَا أَمَاتَنَا وَإِلَيْهِ النُّشُورُ Alhamdu lillaahil-ladhee ahyaanaa ba’da maa amaatanaa wa ilayhin-nushoor – All praise be to Allah Who has given us life after He caused us to die; and unto Him is the resurrection [Al-Bukhaari]
And feel the ‘alhamdulilliah’ in it:  you are deeply grateful for the new day. Besides whoever is grateful to Allah, He will give you more, so in shaa Allah it means lots of barakah in your day!

2. Repent each day or night.
The amazing reward of fasting on the day of Arafah: it expiates the (minor) sins of the previous year and of the coming year [Muslim] But don’t settle for less! You will have your minor sins forgiven with your fast on the day of Arafah in shaa Allah, but what about your major sins? All your major sins can be forgiven by you doing something beautiful: repenting. From your heart.
Action:
Ask Allah to help you say and mean this beautiful supplication each day you live:
أَسْتَغْفِرُ اللهَ الَّذِي لَا إِلَهَ إِلَّا هُوَ الْحَيُّ الْقَيُّومُ وَأَتُوبُ إِلَيْهِ  Astaghfirullaa-hal-ladhee laa ilaaha illaa huwal-ḥayyul-qayyoomu wa atoobu ilayh – I seek Allah’s forgiveness, besides Whom, none has the right to be worshipped except He, The Ever Living, The Self-Subsisting and Supporter of all, and I turn to Him in repentance.
The Prophet salallahu ‘alayhi wa sallam said: Whoever says [above]…Allah would forgive him even if he was one who fled during the advance of an army [Abu Dawood, At-Tirmidhee]

3. Sacrifice something each day.
Did you realize that Eid-ul-Adhaa is the Eid of sacrifice? Ibraheem ‘alayhi sallam was ready to give up everything for the sake of Allah. Even slaughtering his own son, Isma’eel ‘alayhi sallam. The whole point of sacrificing an animal is for you to follow a sunnah and increase in righteousness. So it’s not just a simple click of a button on your phone and computer and your ‘qurbani’ or ‘udhiya’ is done. But Allah says: Their meat will not reach Allah, nor will their blood, but what reaches Him is piety from you [Quran, 22:37] How can you keep this spirit of sacrifice all year?
Action:
Consciously sacrifice something for the sake of Allah each day. Whether it is ten minutes to make a phone call to your parents, sharing a meal with your neighbour, opening a book to understand the Quran, instead of just following your desires and watch television etc.

You filled your days with saying the ‘Dhul Hijjah’ and ‘Eid’ takbeer, don’t stop there! Allah says: وَكَبِّرْهُ تَكْبِيرًا…and glorify Him with a great glorification [Quran, 17:111]Kabirhu means to declare His greatness and magnify Him and how? Takbeera; by saying Allahu akbar, the greatest way of magnifying Allah.

Action: Say the dhikr from this hadith at the beginning of your prayer:
Abdullah ibn ‘Umar narrates that a man came late to Salāh. Upon arriving to the line he started his prayer with the following words, Allaahu Akbaru Kabeeran wal-hamdulillahi katheeran wa subhaan Allaahi bukratan wa aseelaa. The Prophet, after completing the prayer, asked the people who had said this. The man said, O Rasūlullah, I did not intend by it other than good. The Prophet salallahu ‘alayhi wa sallam said, I saw the gates of heaven open because of those words. Ibn ‘Umar added, I never ceased saying these words since hearing the Prophet say that. [Muslim, At-Tirmidhee, An-Nasaa’i and Ahmad]
And whenever you say takbeer, feel it and truly realize that Allah is greater than anything else you love, own, or desire.

5. Revive sunnah prayers.
There is a treasure chest of voluntary prayers with specific rewards you can pick and choose from all year round. At least every day pay special attention to revive a sunnah prayer.
Action:
Pray four rakaat before and after dohr: Whoever sticks to the habit of offering four rak`ahs before Noon Prayer & four rak`ahs after it, Allah will shield him against the Hell-Fire [An-Nasaa’i]
Pray tahiyyatil wudhoo, which are two rakaat after performing wudhoo: Bilal radiyallahu ‘anhu was asked by the Prophet: Tell me about the best of your deeds (i.e. one which you deem the most rewarding) since your embracing Islam because I heard your footsteps in front of me in Paradise.” Bilal replied: “I do not consider any act of mine more rewarding than that whenever I make ablution at any time of night or day, I perform prayer for as much as was destined for me to do [Al-Bukhaari, Muslim]

6. Earn the reward of a Hajj without going to Makkah.
You can earn reward like that of a hajj and umrah 365 days a year.
Action:
The Prophet said: Whoever prays Fajr in congregation, then sits remembering Allah until the sun has risen, then he prays two Rak’ah, then for him is the reward like that of a Hajj and Umrah.” He said: ‘Complete, complete, complete [At-Tirmidhee]
You can do this with friends and your children; pick a day, meet in the masjid and revive this sunnah!

May Allah ‘azza wa jall enable us to do above deeds and accept them from us, ameen.