Friendship From Here to the Hereafter: 10 Ways To Be a Real Friend 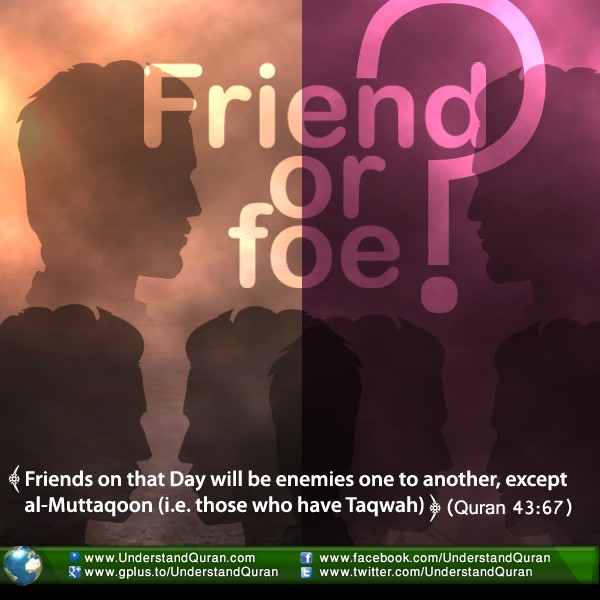 This week we look at something that can either be so beautiful it helps you towards Jannah or so ugly that it can pull you both into the fire together:

Friends on that Day will be enemies one to another, except al-Muttaqoon (i.e. those who have Taqwah). [Quran 43:67]

In our journey towards the hereafter we need good friends. So this week we look at friendship from here to the hereafter and how you can be a real friend. Plus, we have a dua to learn and to teach others, a dua related to friendship in a very special way!

Do you know that the person with the most beautiful character, the one who dealt with people in the best way, also gave us clear advice on friendship? The Prophet (saws) said:  A person is likely to follow the faith of his friend, so look whom you befriend.

I wanted to start with this beautiful story mentioned by Ibn Katheer, related on the authority of Ali Ibn Abi Talib (ra) telling us that any friendship for other than Allah (swt). is turned into enmity except for what was in this friendship for the sake of Allah (swt).

This is how important friendship is in Islam.

The Importance of Good Companions

One of the salaf (pious predecessors) said:  “If Allah subhanau wa ta’ala intends good for His servants, He grants them righteous companions.”

With all the tests around us, including living as a minority surrounded by temptations, choosing the right friends is crucial for keeping our deen. SubhnaAllah, when the Prophet (saws) was sent with the message to establish Islam he did not do it on his own. Allah the Allwise chose for him companions who accompanied him and who carried the message until it was complete.

Two Powerful Ayaat: Who Are Your friends?

The story of Ali (ra), mentioned above, was narrated relating to this ayaat:

And (remember) the Day when the wrong-doer will bite his hands and say: Woe to me! Would that I had taken a path with the Messenger. Woe to me! If only I had not taken so- and-so as a friend! He has led me astray from this Reminder (the Qur’an) after it had come to me. And Satan is ever a deserter to man in the hour of need. [Qur’an, 25:27-29]

Friends on that Day will be enemies one to another, except al-Muttaqoon (i.e. those who have Taqwah). [Qur’an 43:67]

Looking at your friends now, do you think they’re going to help you achieve the purpose of your life, or will they take you away from it? Do they want Allah’s pleasure or is this completely unimportant to them? And what about yourself— what kind of friend are you?

Part of being productive in your life is having productive friends around you. Below are some things to help you take a critical look into how you and your friends are when you are together. Ask yourself if when you’re with this friend, you:

10 Ways To Be a Real Friend: The Beauty of Loving For Allah’s Sake

Love for the sake of Allah ‘azza wajal is the noblest and purest form of love between human beings. I can’t help reminding myself and you of this beautiful hadith. The Messenger of Allah (saws) said, The example of the Believers, in their mutual love and mercy is like the example of a body, if one part feels pain, then all of the body suffers in sleeplessness and fever.

How can you be a real friend?

Here are 10 ways you and your friend can be true friends when together:

1. Leave each other’s company with a higher level of imaan (faith in Allah swt) and start the conversation with the Islamic greeting “As-Salaamu Alaykum”
2. Almost always mention Allah (swt), Noble Qur’an, or Hadith in some context or the other, in your conversations.
3. Strengthen each other’s belief in the hereafter. Give each other more duaa’s (well wishes) than material gifts! And pray for your friends in their absence. The Prophet (pbuh)said: The quickest prayer to be answered is a man’s supplication for his brother in his absence.
4. Attend Islamic study-circles together and never waste each other’s time in useless activities. Never invite the other to a place or gathering of sin
5. Politely point out and reform each other’s mistakes or bad habits in the best way possible.
6. Become uninterested and change the subject if the other starts to say something that is impermissible (like backbiting!)
7. Always discourage the other if they plan to do something wrong and always encourage the other if they intend to do a good deed that they’re hesitant to do.
8. Address each other in a respectful and loving manner. Forgive each other’s faults and shortcomings, and hide them from others. Hamdoon al-Qassaar said, If one of your brothers commits an error, then seek ninety excuses for him, and if not, then you are the blameworthy one. And  the Prophet (pbuh) said: No two people who love one another for the sake of Allah (SWT), or for the sake of Islam, will let the first minor offence of either of them come between them.
9.  Don’t envy the signs of Allah’s bounty upon them. Rather be happy for them and praise Allah (swt) as if these bounties where upon you! Or do they envy men for what Allaah has given them from His bounty. [Sooratun-Nisaa]
10. Don’t break your promises. Rasulullah (saws) said, The signs of the hypocrite are three: When he speaks he lies, when he makes a promise he breaks it and when he is entrusted he acts deceptively.
10. Don’t hold grudges. The Prophet (pbuh) said: The doors of Paradise are opened on Monday and Thursday, and every servant who does not associate anything with Allah (swt) will be forgiven, except for the man who bears a grudge against his brother. It will be said, `Wait for these two until they reconcile, wait for these two until they reconcile, wait for these two until they reconcile.’

One day the Prophet (saws) took Mu`adh by the hand and said, O Mu`adh, by Allah (swt) I love you, so I advise you, O Mu`adh, never forget to recite, after every prayer, `O Allah (swt), help me to remember You and to give thanks to You and to worship You properly (Allahumma, a`innee `alaa dhikrika wa shukrika wa husni `abadatika).’

Your homework is to learn this dua and teach it to all your friends!
You can either send it in a text message to them, email it, or place it on your facebook. May Allah (swt) reward you abundantly for it!

Funfact to End With

A French report states that there are seven million dogs in France, a country whose population is fifty-two million. These dogs live with their owners like one of the family. It is no longer strange in French restaurants to see a dog and its owner eating together at the same table. When an official of the animal welfare organization in Paris was asked, “Why do the French treat their dogs like they treat themselves?” he answered, “Because they want someone to love, but they cannot find any person to love.”

I ask Allah to make us of the righteous ones and give us companions that will take us away from His punishment and lead us to His pleasure and the highest chambers in Paradise. Ameen (please make this dua with me!).

P.S. Now that you know about true friendship for the sake of Allah (swt), why not try studying one of our courses with a friend? It’s win-win, in more ways than one.