Filling the Heart With Light: Building the Teacher-Student Relationship with Allah (swt) 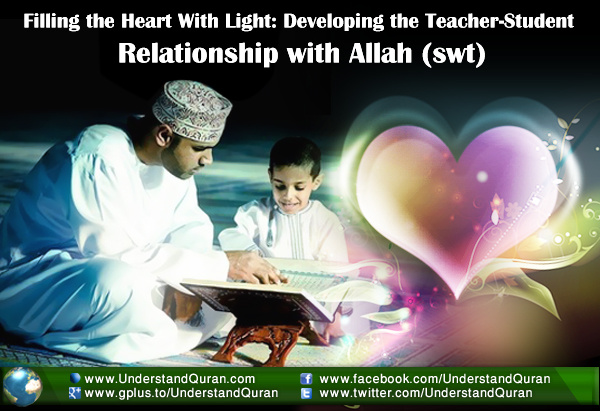 In one of the most famous Surahs of the Quran Allah (swt) said: Al-Rahman (the intensely merciful), a’llamal-Quran (He taught the Quran). [Quran, 55:1] In other words, Allah (swt) has declared Himself the Teacher of the Quran, and who can be a better teacher than He?

It’s our choice whether we want to be His students or not. In my experience, in order to become His student all one need do is truly love His Book the Quran and demonstrate this love in some way. The least we can do to show this love is to supplicate to Him that He make the Quran the noor (light) of our hearts.

Early Experiences With the Quran

As is common in many Muslim countries, my relationship with the Quran began at an early age,  thanks of course to my father’s love for the book. I completed my Nadhira, reciting the Quran by seeing, when I was in primary school. During my high school and college years I remember reciting the whole Quran during Ramadan. We had a few tafaaseer (exegesis of the Quran) at home which I remember reading here and there; I especially enjoyed reading the Qasus (the true stories) of the Quran.

A Catalyst for Memorization

The next major milestone in my relationship with the Quran came when I started memorizing it on my own. I was then in the University. It was my first or second aitikaaf (seclusion) in Ramadan. The Qari (reciter) leading the late night prayers in the masjid got sick and we had to request and convince a few young huffaaz (memorizers of the Quran) in the masjid to replace him by dividing the recitation amongst them. I remember how the lads struggled and how some of them recited looking at the Quran.

This incident became a catalyst for me. I decided to start memorizing the Quran to become self-sufficient. About 20 years later, I’ve memorized more than 18 parts of the Quran and am still continuing by the grace and mercy of Allah (swt).

More importantly, however, this activity became the source of a very strong link with the Quran for me. Now I can’t afford to neglect the Quran recitation even for one day for fear of losing the memorization in no time.

One thing that especially helped me in achieving this goal is that I always memorized my lessons with the translation. I wouldn’t know the exact rules and grammar but I would get the gist of the message.

Tafseer on the Road

The next major step in my relationship with the Quran came years later. About four years ago I started listening to an audio tafseer in my car while traveling to and fro my office and everywhere else I traveled alone. I completed that tafseer in almost a year. The tafseer changed my life as for the first time I  started realizing the significance, greatness, and depth of the Quran. I slowly started learning how to ponder over the meanings of the Quran. I started making regular duas to Allah (swt) to increase my understanding and love for the Quran.

In 2009 Allah (swt) granted me the ability to perform Hajj. While in Saudi Arabia I saw the first glimpse of Dr. Abdul Aziz’s Understand Quran (UQ) course on Peace TV. The hajj journey was an amazing experience and again I put emphasis on making duas for Allah (swt) to increase my love of His deen and the guidance to the path that would lead to His (swt) pleasure.

During my stay in KSA after Hajj, one of the brothers from our Hajj group invited me to a Quran class which turned out to be a UQ review class. Unfortunately, Dr. Abdul Aziz wasn’t present on the day. Luckily I managed to meet Dr. Abdul Aziz later before leaving Saudi Arabia.

On my return, I ran the DVD that the brother gave me at the course. What a treasure, what a gift Allah (swt) gave me for my Hajj! I felt so happy at the acceptance of my duas and inshaAllah the acceptance of my Hajj. I started doing a lesson every day and within a month I had completed Part 1 of the UQ course.

But this was just the start. My immediate response after completing this course was that this was a message that needed to be spread. I sincerely believed that through this course every Muslim could learn the Quran very quickly, so I decided to teach it myself. Three years later, I’ve conducted several rounds of UQ courses in Australia and Pakistan, alhamdolillah. I’m  now UQ Academy’s course coordinator in Australia. During this time my thirst for learning the Quran has only increased and I’ve used more resources to increase my knowledge.

Leaving the Rest to Allah (swt)

I’d never intended to learn the Quran to the degree that I understand it today. Indeed, only Allah (swt) guided me to this path. When I reflect back the only ingredients that I think could have led me to this way are the duas for guidance and the consistency that I showed in attaching myself to the Quran. I sincerely believe that whoever has a sincere love for this book Allah (swt) Himself will help them in this path, inshaAllah. And if you are reading this article, maybe this is your chance to begin to learn it through this beautiful course and to start spreading the message.

Dr. Kamran Shafi is a lecturer at the University of New South Wales, Canberra, Australia. He joined Understand Quran Academy in December 2009 as a student and later became a teacher of UQ courses in Australia. Please contact him if you’re interested in organising a UQ course anywhere in Australia. His contact details are available here on the UQ website.