Is There Fasting After Ramadan? 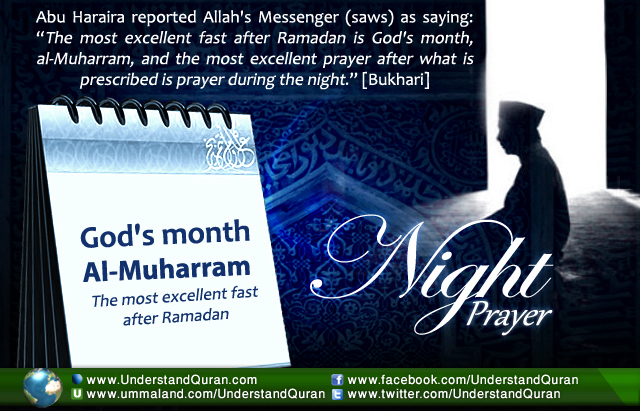 Why Stop Your Progress Now?

When the blessed month of Ramadan ends we leave behind us the month emphasizing mercy, forgiveness, and freedom from the hellfire.  But what do we take with us?  We have challenged our nafs and our desires and– insha’ Allah– made progress.  Now is the time to continue that progress, not fall back.  How can we accomplish this?  The progress came from internal commitment, special prayers and fasting, so these are what we must continue.

Tarawih prayer can become Tahajjud prayer (Qiyam Al-Layl).   Allah (swt) said to the Prophet Muhammad (saws): O you wrapped in garments, stand (to pray) all night, except a little – half of it or a little less than that, or a little more.  And recite the Qur’an (aloud) in slow, (pleasant tone and) style.  [Quran, 73: 1-4]

Abu Haraira reported Allah’s Messenger (saws) as saying: The most excellent fast after Ramadan is God’s month, al-Muharram, and the most excellent prayer after what is prescribed is prayer during the night. [Bukhari]

In addition to continuing the night prayer, what else can we do to preserve the gains achieved during Ramadan?  Ramadan fasting provides both spiritual rewards and health benefits.   These rewards and benefits of fasting do not end with Ramadan.  Fasting after Ramadan captures most of the spiritual rewards and all the health benefits.  Also, fasting – in combination with other acts of worship – has added value.   Narrated Mu’adh ibn Jabal: The Apostle of Allah (saws) said: “(The reward of) prayer, fasting and remembrance of Allah is enhanced seven hundred times over (the reward of) spending in Allah’s path.”  [Abudawud]

What does the Sunnah of the Prophet Muhammad (saws) convey regarding fasting beyond Ramadan?  Let us see.  First and foremost, we need to member that, as Abu Huraira reported, Allah’s Messenger (saws) said: “fasting is a shield.” [Muslim]  It is a shield from sinning, from giving in to one’s nafs.  And remember also that Allah (swt) said: The Fast is for Me and I will give the reward for it. [Bukhari, Muslim]  This does not just relate to fasting during Ramadan; it relates to any fasting consistent with the Sunnah.

The first opportunity for Sunnah fasting comes in the month immediately following the month of Ramadan.  Abu Ayyub al-Ansari (Allah be pleased with him) reported Allah’s Messenger (saws) as saying: “He who observed the fast of Ramadan and then followed it with six (fasts) of Shawwal, it would be as if he fasted perpetually.” (Muslim)

The next opportunity for Sunnah fasting comes in Shawwal as well as in every other month:  Narrated Qatadah Ibn Malhan al-Qaysi: The Apostle of Allah (saws) used to command us to fast the days of the white (nights): thirteenth, fourteenth and fifteenth of the month. He said: “This is like keeping perpetual fast.”  (Abudawud)

The day of Ashura had special significance before fasting during Ramadan was commanded.  Narrated Ibn ‘Abbas: When the Prophet came to Medina, he found (the Jews) fasting on the day of ‘Ashura’ (i.e. 10th of Muharram). They used to say: “This is a great day on which Allah saved Moses and drowned the folk of Pharaoh. Moses observed the fast on this day, as a sign of gratitude to Allah.” The Prophet said, “I am closer to Moses than they.” So, he observed the fast (on that day) and ordered the Muslims to fast on it.  (Bukhari)  When Ramadan was commanded, the Prophet (saws) said: “He who wishes to observe this fast may do so, and he who wishes to abandon it may do so.” (Muslim)

The issue of fasting of Mondays and Thursdays is an issue of some disagreement.  Abu Huraira reported Allah’s Messenger (saws) as saying the deeds of people would be presented every week on two days, i.e. Monday and Thursday. (Muslim)   Abu Huraira also reported Allah’s Messenger (saws) as saying: The gates of Paradise are not opened but on two days, Monday and Thursday. (Muslim)  Relative to the first, the Prophet Muhammad (saws) is reported to have acknowledged fasting on these two days “because I want my deeds to be presented while I am fasting.” (Muslim)

There is another hadith that singles out Monday, in which the Prophet Muhammad (saws) was asked about fasting on Monday. He said: “It was the day on which I was born, and on which revelation was sent to me.”  (Muslim)  To further complicate the issue, there are a number of ahadith which refer to the Prophet Muhammad (saws) fasting three days each month.  This can refer to the white nights, discussed above.  However Hafsah, Ummul Mu’minin narrated: The apostle of Allah (saws) used to fast three days every month: Monday, Thursday and Monday in the next week.  (Abudawud)  Allah (swt) knows best.

How and When Not to Fast

What are the days when it is not permissible for us to fast?  We should not fast on Jum’uah (Friday) unless we fast the day before or the day after (for example when one of the white nights occurs on Friday).  No fasting is permissible on two days: ‘Id-ul-Fitr and ‘Id-ul-Adha.

Narrated Anas: The Prophet said, “Do not practice Al-Wisal” (fasting continuously without breaking ones fast in the evening or eating before the following dawn). (Bukhari)

Similarly, the Prophet Muhammad (saws) forbade a perpetual fast, i.e. fasting every day.  He offered two alternatives.  Apostle of Allah (saws) said: “The observance of three days’ fast every month and of one Ramadan to the other (i.e. the fast of Ramadan every year) is (equivalent to) a perpetual fast.” (Abudawud)  However, he offered a more rewarding alternative: the fast of Dawud (David), fasting every other day.  The Prophet Muhammad (saws) said: “There is nothing better than this.” (Muslim)