Early to Rise: How to Win the Blessings of El-Fajr 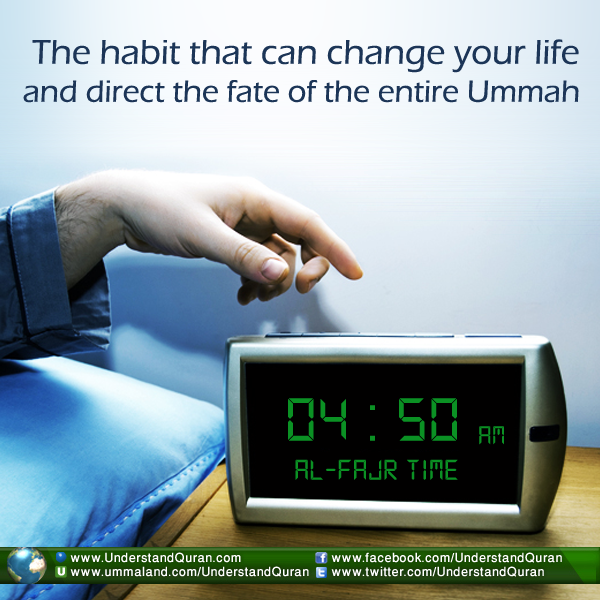 The early bird gets the worm— clichéd, but true— so let’s talk about building the habit that can not only change our lives but also change the fate of the entire ummah. That habit is getting up for el-fajr and utilizing the time after it.

The irony is that we Muslims love snoozing in the after-fajr hours despite the fact that our Prophet (saws) deemed that dua for the after-fajr hours would be blessed for us. Not only that, but all the non-Muslim personal development gurus and business tycoons and even some of the richest men on earth religiously practice this rising-early habit.

First of all let’s accept the fact that it’s not difficult to be an early-riser; and after reading this article, it’s going to be a thousand times easier, only if Allah wills.

How Do You Develop a Habit?

Let’s be very clear on this— we’re trying to develop the habit of waking up for el-fajr and reciting from the Quran and then making good use of the after-fajr hours.

Allah says: Establish prayer at the decline of the sun [from its meridian] until the darkness of the night and [also] the Qur’an of dawn. Indeed, the recitation of dawn is ever witnessed. [Quran, 17:78]

Say it aloud. Let the atmosphere around you record your affirmation! Remember, even the intention is rewarded.

Now, give yourself a 21-day challenge and kick off. Remember, it has to be a consecutive 21 days. If you slip, start it all over again. No worries— better to die trying than to give up.

What is your ANCHOR?

You can develop habits in two ways:
1). Using the sheer force of will power and forcing yourself to follow a plan. But I suggest you go easy on yourself; the more you beat yourself up the harder it’s going to be.

2). Find out what your anchor is. What actually triggers your habit? For example, when you wake up and go to the washroom and pick up your toothbrush (or miswak), you unconsciously pick up the toothpaste, apply it to the brush, and put the toothbrush in your mouth. You don’t have to think about it or make a decision about it— you just put it there.

So what triggers you to wake up? Is it an alarm? Is it the voice of the mua’zzin? Or is it someone throwing a bucket of cold water in your face?

If you have to catch a flight at 7:00 a.m. and you sleep even as late as 3:00 a.m., won’t you get up for the flight on time? You definitely will. Why? Because of your underlying fear of missing the flight. So if all the strategies you use to wake up early are failing, you need to fix your trigger.

There’s usually some under-lying factor that needs to be addressed. If you can discover what that underlying factor is, it’ll be way easier for you to wake up for el-fajr. For most of us, this factor is fear of Allah (swt) that may result in developing this habit.

And whosoever fears Allah and keeps his duty to Him, He will make a way for him to get out. [Quran, 65:2]

Are You Going Too Fast?

Let’s say you want to get up early in the morning, pray el-fajr, recite one juzz, say adhkaar, go for a walk, do some exercises, eat breakfast, and read a book. How does that sound? Cool? No! Un-cool! Remember: dream big but start small. To develop a habit you must start with something that will hold your attention.

It’s better to start with praying al-fajr and reciting five or sis ayah of the Quran (for beginners of course) and then build from there. Remember, Allah (swt) loves deeds that are consistent, even if they’re small.

Taking baby steps is better than taking giant leaps that result in a spectacular failure in the middle of the course.

What Routine Will You Start With?

Let’s say you want to get up, do miswak, pray el-fajr and read five or six ayah from the Quran.  What you must do is maintain the order. Maintaining the order is necessary because that’s how this routine gets strengthened in your neural pathways.

After practicing it in the same order you won’t have to think over and over again,“what next?” Also, you need to leave the decision-making parts of your brain silent in the morning, and putting yourself on auto-pilot will be much easier if the sequence is maintained.

How Will You Reward Yourself?

Celebration, appreciation, gratitude, and reward are words that seem to have evaporated from Muslim dictionaries.  Remember, the fasting person gets two rewards; one comes when meeting his Lord and the other is arrives on the breaking of the fast.

Craving a reward makes building a habit easier. So, what reward are you going to give yourself for offering al-fajr and reciting the Quran? Maybe a healthy breakfast or the privilege of wearing your best clothes or whatever (halal) thing you’ve been craving for a while.

If you want, you can buddy up with someone for this task. And don’t forget to share your success story below!