Why Doesn’t Allah (swt) Show Me a Miracle? 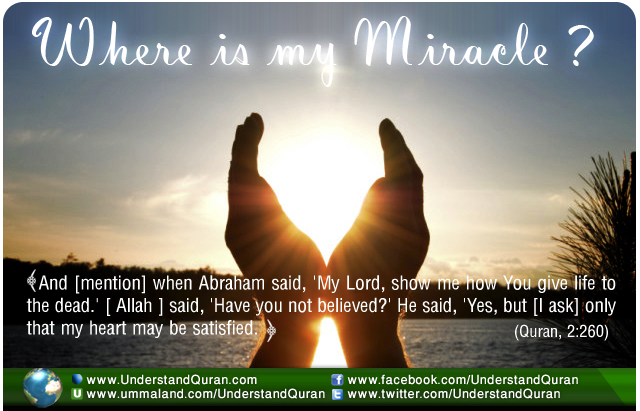 Why We Look for Miracles

Falling stars, flying UFO’s, crying statues . . . Anything out of the ordinary unfailingly captures our attention. The more extraordinary the thing, the greater coverage it gets in media.

And so you will hear some people say things like, “I will go forward in marrying this person if Allah shows me a sign,” or, “I’ll start doing my hijab once I see a sign from Allah.” Some people pray istikharah and then start asking, “I haven’t seen any signs from Allah regarding this matter— was my prayer defective? Should I pray again?” And still others advise them, “Yes! Do keep praying until Allah shows you a sign. Believe me, it happened with me. I prayed istikharah and would you believe me? The next day while I was driving, I had an accident. So I was sure I shouldn’t go forward with it.”

Still others, those of weak faith, want to justify their belief in the unseen world by forcing themselves to believe they saw a jinn. Or  a “shaykh” of theirs has unusual powers by which he can talk to him long-distance without using a phone or the internet.

Nonetheless, wanting to see miracles with your own eyes is a natural urge of the human being. Even Ibrahim alaihi salam asked Allah, And [mention] when Abraham said, “My Lord, show me how You give life to the dead.” [ Allah ] said, “Have you not believed?” He said, “Yes, but [I ask] only that my heart may be satisfied.” [Quran, 2:260]

If you already have a strong faith in your Lord, trying to look for signs is following the sunnah of prophet Ibrahim. However, for those of weak faith it could lead to dangerous results. It could lead them to believe in anyone claiming to have miraculous powers and narrating miraculous stories. Before believing any such stories we need to refer things back to the Quran and sunnah.

So we ask ourselves, why doesn’t Allah show us signs? Surely, all the prophets and messengers were shown signs from Allah. Imagine standing behind Musa alaihi salam, watching the see parting. Is it the same as hearing the story second hand? Surely not. As Allah explained in Surah at-Takathur, there is a difference between ilmul yaqeen (knowledge of certainty) and ‘aynal yaqeen (seeing the certain with your own eyes).

We look for miraculous signs when in difficulty, even if just to comfort us that God is there watching over. You might have heard in movies, when in a fix, the actor calls, “God, show me a sign.”

And then, when someone propecia online pharmacy doesn’t see any such signs, she or he asks, “Does God even exist?”

That is the mindset of the ignorant and disbelieving people.

Those who do not know say, “Why does Allah not speak to us or there come to us a sign?” Thus spoke those before them like their words. Their hearts resemble each other. We have shown clearly the signs to a people who are certain [in faith]. [2:118]

So the answer to “Why doesn’t Allah show me a miracle, a sign?” is that Allah does show you and me signs. But the question is, do you keep your eyes open enough to see them?

Who says a sign needs to be something outside of the ordinary, something breaking all laws of normal physics and chemistry?

And He has subjected for you the night and day and the sun and moon, and the stars are subjected by His command. Indeed in that are signs for a people who reason. [16:12]

It is Allah who erected the heavens without pillars that you [can] see; then He established Himself above the Throne and made subject the sun and the moon, each running [its course] for a specified term. He arranges [each] matter; He details the signs that you may, of the meeting with your Lord, be certain. [13:2]

If you can grasp the fact that the universe runs according to Allah’s laws, you will start seeing signs everywhere you look:

And of His signs is [that] He shows you the lightening [causing] fear and aspiration, and He sends down rain from the sky by which He brings to life the earth after its lifelessness. Indeed in that are signs for a people who use reason. [30:24]

Do you not see that ships sail through the sea by the favor of Allah that He may show you of His signs? Indeed in that are signs for everyone patient and grateful. [31:31]

Or have you thought that the companions of the cave and the inscription were, among Our signs, a wonder? [18:9]

Ibn Kathir explains this verse as Allah saying, Oh Muhammad (sallallahu alaihi wa sallam), the case of the People of the Cave and the inscriptions were not something really astonishing relative to My power and ability. The creation of the heavens and the earth, the alternation of night and day and the subjugation of the sun, moon and heavenly bodies, and other mighty signs all indicate something of the incredible power of Allah and show that He is able to do whatever He wills.

And what is the special miracle that Allah sent down for this ummah, the ummah of the last Prophet? The Quran, full of what Allah Himself calls ayaat or “signs” in English. There is a whole science built on this specific topic. But in order to immerse yourself in that ocean of miraculous beauty, we first need to learn Arabic. Here are some options for you to learn Arabic with ease.