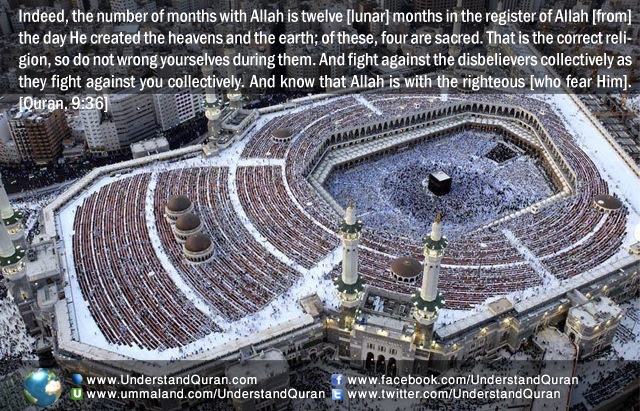 The Months of Islam

Do you know that you’ve just entered the month of Dhu’l-Qa’dah? Dhu’l-Qa’dah is the first of the four sacred months (Al-Ashhur Al-Hurum).  The other three are Dhul-Hijjah, Muharram and Rajab. These four months are mentioned in Surah At Tawbah, Quran, 9:36. In these sacred months the rewards and punishments for deeds are magnified, subhanAllah!

Specifically, Allah azza wajall warns us against doing injustice to ourselves during these months.

The name Dhu’l Qa’dah can be translated as the month of “settlement” or “sitting,” as it is the month when people stop fighting each other in wars. Let this inspire you to settle arguments and let go of ill feelings!

The months of the Islamic calendar months are based on the movement of the moon (Qamari months).  However, the calendar starts with the emigration or hijra of the prophet salallahu ‘alayhi wa sallam from Makkah to Medinah as this hijra was the turning point in the history of Islam, hence the name hijri calendar. This calendar was adopted two and a half years after Umar ibn Al-Khattab became caliph.

What does this sacred month mean for you?

Dhu’l-Qa’dah is the first of three consecutive sacred months, followed by Dhu’l-Hijjah and then Muharram. This means the next three months are a time in which there are magnified rewards for your good deeds and magnified consequences for your bad deeds and habits!

I will say bismillah now and ask Allah azza wa jall to give me tawfeeq in this time to increase my good deeds and help me strive against my bad habits and deeds.