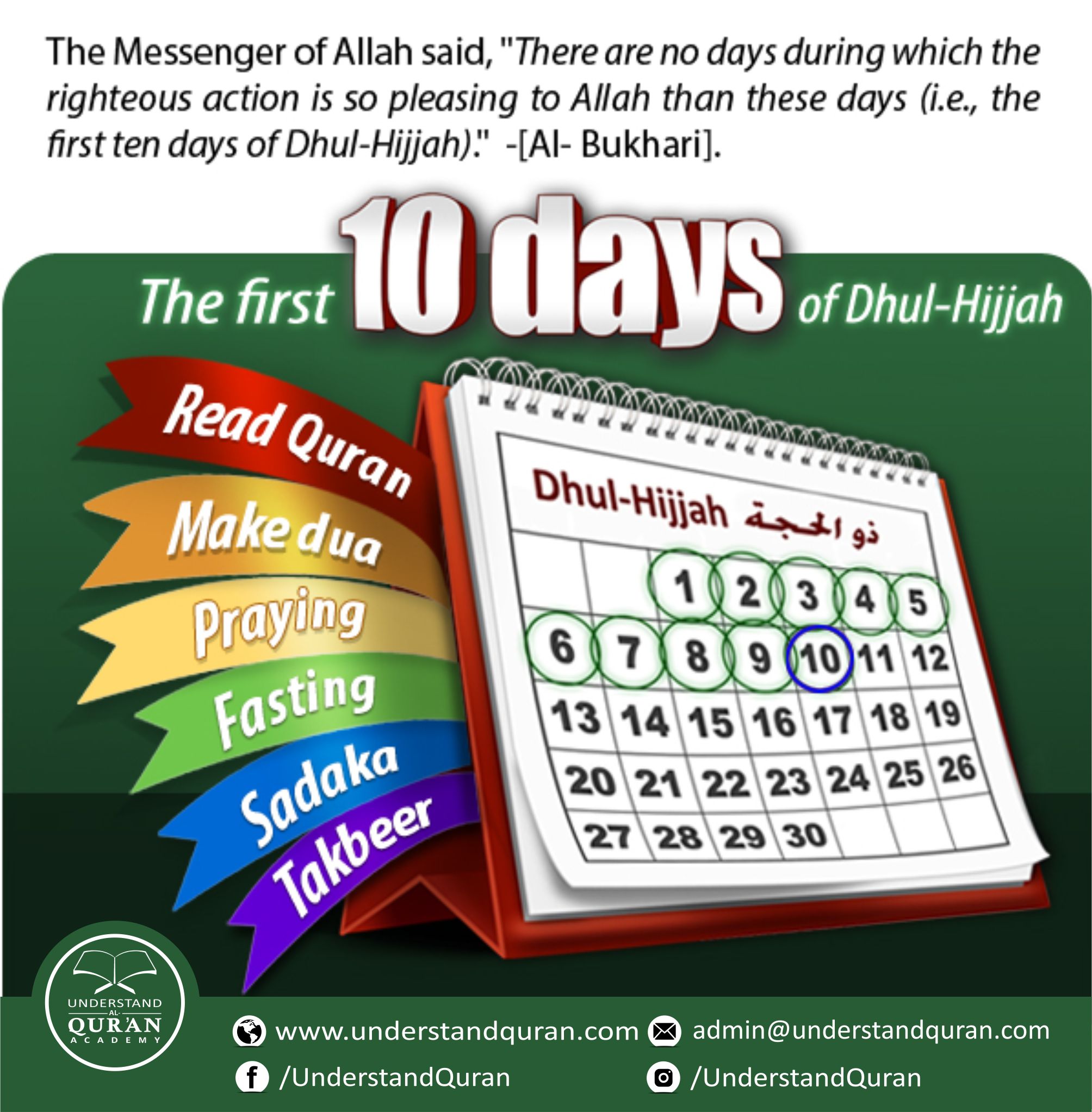 Remember how you felt in the last ten nights of Ramadan? If you don’t similarly now, ask yourself why. Most of us don’t realize the importance of the upcoming days of Dhul Hijjah. Did you prepare for them; did you make an action plan? Experience the blessed days of Dhul Hijjah with your heart with these five beautiful reflections in part one, followed by eight deed tips for these blessed days and beyond in part 2!

1. Being thankful as an act of worship.

Are you truly thankful for these blessed days? Allah the Most High says: By the dawn (or day break) and by the ten nights. [Quran, 89: 1-2]
Realize that Allah Himself is making an oath on something; how important must it be? These ayaat have been interpreted by the scholars of tafseer as Allah the Most High making an oath on the last ten nights of Ramadan or to the ten nights of the first ten days of Dhul Hijjah. These reflections are inspired by the latter opinion, also held by Ibn Katheer, may Allah have mercy on him.
Now, how can we thank Allah? By doing those actions, prescribed in the Quran and Sunnah through which we can attain the maximum benefit and reward for our own souls. But not only that. Do those deeds in the most beautiful, beloved, respectful and humble manner. This is what ‘ibaadah, or worship, is.
Action point: Ask Allah the Most High: O Allah, give us the tawfeeq (ability) to benefit, do good deeds and accept them from us, ameen!

Overview of these honorable days:

1-8th Dhul Hijjah: Pilgrims assume or put their ihram on with the intention of performing hajj, the pilgrims leave and all head to Mina. For the non-pilgrims, these are days of increased good deeds and rewards.
9th Dhul Hijjah: Yawm Arafah; the most beloved day to Allah the Most High. Pilgrims leave to go to a place called Arafah where they stand in prayer and supplication. This is referred to as the Hajj Day, the main day of the pilgrimage. For non-pilgrims, it is a day of fasting which is the Sunnah of the Prophet Muhammad ﷺ
10th Dhul Hijjah: Yawm al Nahar or the Day of Sacrifice. The day when the pilgrims go to throw stones at the Shaytan- Jamaarat -cut their hair, take off their ihram and perform the sacrifice. Eid-ul-adhaa, or the ‘Big eid’’ is a day of qurbani or udhiyah.
Note: celebrations like chand raat or other celebrations in which disliked or impermissible actions take place aren’t prescribed in the Sunnah.
11th Dhul Hijjah: Yawm-al-Qarr; the pilgrims stay in Mina. The qurbani can be performed between the tenth and thirteenth of Dhul Hijjah.

These days are a chance to bring back that feeling and emaan-boost you had in Ramadan.
But also think: How many sins have you committed since Ramadan? You now have a fresh opportunity to erase your sins and cleanse yourself. There’s also a second chance for those who felt Ramadan slip through their fingers and these are the first ten days of Dhul-Hijjah!
Action point: Hang the following narration on your wall as a constant inspiration to give it your all. The Prophet ﷺ said: No good deeds done on other days are superior to those done on these (first ten days of Dhul Hijjah) … [Al-Bukhari]

4. Prepare yourself for the Day of ‘Arafah

The standing (wuqoof) in ‘Arafah reminds you of the throngs of people on the Day of Gathering. If you feel tired from being in a crowd of thousands, how will it be in the crowds of barefoot, naked, uncircumcised people, standing for fifty thousand years?

On the 9th of Dhul-Hijjah Allah the Most High frees people from Hell. Internalise this. The Prophet ﷺ said: There is no day when Allah ransoms more slaves from the Fire than the day of ‘Arafah. He draws near and expresses His pride to the angels and says: ‘What do these people want? [Muslim] What an amazing chance; to be saved from the worst destination!

The Prophet also said: Fasting on the Day of ‘Arafah absolves the sins for two years: the previous year and the coming year, and fasting on ‘Ashura, (the tenth day of Muharram) atones for the sins of previous years. [Al-Bukhari, At-Tirmidhi]

Action point: With the fast of ‘Arafah you’ll have your minor sins forgiven of the previous and coming year, by Allah’s will. So, what about your major sins? Think about all your bad deeds (and speech) and repent sincerely (tawbah) for your major sins on this day and make a strong determination to never commit them again! Remind yourself that Allah the Most High can forgive all your sins, no matter how great they are. Say, O My servants who have transgressed against themselves (by sinning), do not despair of the mercy of Allah. Indeed, Allah forgives all sins. Indeed, it is He who is the Forgiving, the Merciful. [Quran 39: 53] These grand days are a great opportunity to quit your sinful habits once and for all!

The 10th of Dhul Hijjah is the day of sacrifice, Yawm al nahar. The Prophet said:
The best day in the sight of Allah, blessed is He, the Most High, is Yawm al nahar, then Yawm al Qarr (the 11th of Dhul Hijjah, the day the pilgrims begin their stay in Mina). [Ahmad] Slaughtering the sacrificial animal (udhiyah in Arabic) is done on the 10th, 11th or 12th day and one may sacrifice a thousand animals on days other than these, but it will never be regarded as this blessed udhiyah. Therefore, the qurbani is a sacred act which can only be done during the three days of Dhul Hijjah as specified. But, what is the goal of your qurbani?
After the fasting of Ramadan which main purpose was …that you may become righteous [Qur’an: 2,183], your qurbani is to attain taqwa! Their meat will not reach Allah, nor will their blood, but what reaches Him is piety from you. [Quran, 22:37] See your sacrifice as a symbol of attaining Allah’s pleasure and approval, expression of your love and servitude to Allah.

Action points: Ibrahim, peace be upon him, was ready to give up everything for the sake of Allah by submitting to the command of Allah to sacrifice his only son Isma’eel after he had grown up and become a help to him. Firstly, convey this story to children and others. Secondly, remind yourself that there is no room for emotions which go against the commands and prohibitions of Allah. O Allah, make me of those who submit to You and feel peace in my heart, ameen! Thirdly, work hard to instil sabr in our children like Isma’eel, who said: O my father! Do that which you are commanded. If Allah wills, you will find me of as-saabireen (the patient ones).[Quran, 37:102] O Allah, make us and our children of as-saabireen, ameen!

Upon sighting the moon, the one offering Qurbani should stop and not cut their hair and nails. We learn from the Sunnah of the Prophet that the one who wants to offer a sacrifice must stop cutting his hair and nails and and not remove anything from his skin. The Prophet said: When you see the new moon of Dhul-Hijjah, and one of you wants to offer an udhiyah, let them refrain from (cutting anything) from their hair or nails. [Muslim, Ibn Majah, Abu Dawud, Al-Tirmidhi and An-Nasaí] Scholars have said that if the man of the household sacrifices an animal on behalf of his family – the family members can still cut nails etc, just the person who is financially and/or physically doing the sacrifice has to not cut nails etc. If one decides late And Allah knows best. One who wants to offer a sacrifice may resemble those in ihram in some aspects of the rituals performed so that he may draw closer to Allah by offering the sacrifice. When a slave was purchased, his head would be shaved to show he has a master and the only true Master is Allah.

Learn eight practical deed tips for the first ten days of Dhul Hijjah (and beyond) in part 2, insha’ Allah!