What Did We Deposit in Our Accounts for this Year? 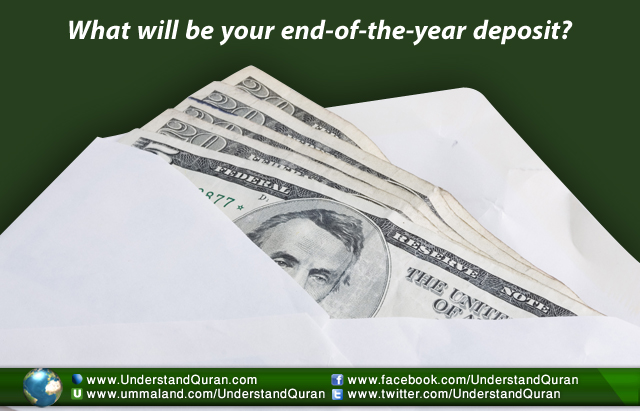 What Did We Deposit in Our Accounts for this Year?

At the end of each year, people welcome the next year exuberantly. Some are thrilled that a new year is beginning. Plans must be made for New Year ’s Eve. Call friends. Make arrangements. Purchase greeting cards. Wrap gifts.  Draft New Year Resolutions. On the other end are those who indifferently enter the New Year like any other day.

Muharram marks the beginning of a new lunar calendar. The month has a high virtue for Muslims not because it is a new year but it is one of the four sacred months, as Allah (swt) says,

“Indeed, the number of months with Allah is twelve [lunar] months in the register of Allah [from] the day He created the heavens and the earth; of these, four are sacred.” [Quran, 9:36]

What does sacred really mean? Sacred means anything that is held in high regard. Islam lays great emphasis on time. Discouraging senseless celebrations and blindly following trends, it encourages introspection.

When one looks at the warm fuzzies at ‘a date change’ one wonders, what is it that they are excited about? What makes them so overjoyed about a new year?

One would say look this year they got a new job, new house, new car, switched career, got married, had children and so on. Indeed, these are blessings from Allah (swt). May He enable us to express gratitude for these blessings and not let them become distractions and a cause of distancing from Him..

At a Jumuah Khutbah when Muhammad Ibn Saalih Al-‘Uthaymeen (ra) was inquired about greeting and congratulating others upon the arrival of the new Hijri year, he said, “…One does not rejoice by dint of having lived for many years; rather, the real joy is when he has specifically spent these years in the obedience of Allah…”

This advice is worth contemplating. What did we deposit in our accounts this year? What is it that we did this past year, past month or even a week ago that can save us on the Day of Resurrection? Where did we spend most of our time; in the kitchen trying out new recipes, in the mall catching up on new fashion trends, in front of the television or glued to the newspaper following the stock market and political debates?

Not that a Muslim should live his life in seclusion for that’s extremism and prohibited in Islam. Society needs us. We have to be a part of it. But what distinguishes us from other nations is the fact that a Muslim lives a conscientious life. It is this mindfulness that helps a Muslim reform himself and play a part in reviving the Ummah.

How can we revive the Ummah if we exclude our own role from this great responsibility?

At the end of each year, some people make a list of things that they resolve to change. To evaluate the efficacy of New Year Resolution, Richard Wisemen, a British psychologist, conducted a survey of over 3000 people that conceded 88% of all resolutions end in failure. Why is that? Psychology tells us when you load a person with numerous adjustments, he is unable to keep them up.

Islam, alhamdulillah, is a balanced religion which speaks volumes about the Divine artistry. Taking into account the human fitrah, it does not lay a burden that one cannot carry.

When one studies the exegesis one can’t help but be in awe about Allah’s wisdom behind those revelations. The Prophet (saw) was not assigned the task to revive the Ummah in one go. Commandments were sent in stages considering human weaknesses.

Therefore, Islam doesn’t teach us to wait till the end of the year to write resolutions. The Companions (ra), some of them who had already been given the good news of Paradise evaluated their actions at every step.

Our Prophet (saw) despite living a pious life sought Allah’s forgiveness seventy times in a day.

Use Allah’s favors as blessing and not distractions. Get in the habit of evaluating your tongue and your actions. As social media has become a part of our lives critically evaluate your usage. Do not become a cause of discomfort for others or engage in idle talk. Seek righteous companions who preserve their own emaan and yours. Make time for Quran.

Uzma Awan is a freelance writer with a passion for Islam. She is journaling her Qur’an journey at her blog.