Creation of Sustainable Natural Resources, the Quranic Way, Part I 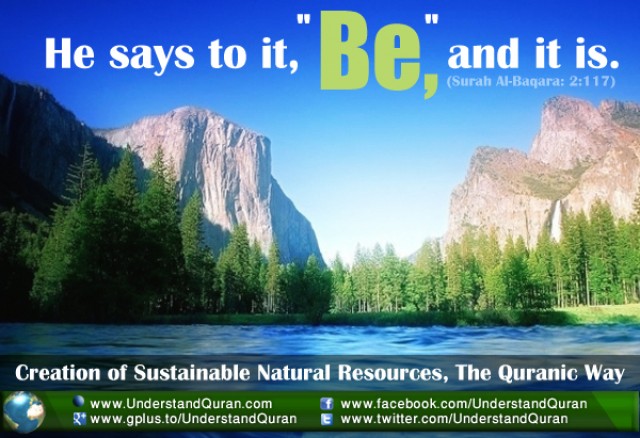 I Seek refuge with Allah (swt) from Satan the rejected.

In the name of Allah (swt), the Most Gracious, the Most Merciful . . .

All praises and thanks are to Allah (swt)  the “Rabb” of the worlds.  The Most Gracious, the Most Merciful, master (of) the day (of) judgment. You alone we worship and You alone we ask for help.  Guide us to the right path, the path of those You have favoured, not of those who have earned Your wrath, nor of those who have lost the way. Ameen. [Surah Al-Fatihah: 1-7]

May His blessings be upon the most honourable of the messengers, Mohammed (saw), the seal of the prophets, and his family and companions.

Not a Scientific Book, But Science Backs it Up

Allah (swt), the creator and sustainer of the universe, makes things happen by a single command: He says to it, “Be” and it is. [Surah Ya-sin: 82].

Everything, including the creation of the universe, is preordained, as Allah (swt) describes: Have not the unbelievers ever considered that the skies and the earth were once one mass, and then We split them asunder? And We have created every living thing from water. Will they not believe? [Surah Al-Ambiya: 30]  As regards ownership: To Allah belong the treasures of the heavens and the earth. [Surah Al-Munafiqun: 7]

Allah (swt), having created the universe with the solar system, the planets, including the earth, and set them all in motion, He then created . . . the night and the day, and the sun and the moon: all (the celestial bodies) in the orbit of their own. [Surah Al- Ambiya: 33] Neither is it possible for the sun to overtake the moon, nor for the night to outstrip the day; each floats along in its own orbit. [Surah Ya-sin: 40]

He then furnished the earth with mountains, rivers, water, plants, animals, etc., resulting in a comprehensive ecosystem.    He also provided the requisite elements, such as oxygen and nitrogen to make it self-supporting.  Science tells us that the earth’s atmosphere is closed and self-sustaining and that nothing escapes or enters the atmosphere.

Provisions on Earth to Support Life

Allah (swt) furnished the earth to support life, as He describes: Allah has made the earth for you as a wide expanse so that you may walk in its spacious paths. [Surah Nuh: 19-20] In Surah Luqman:10 the description continues: He created the heavens without visible pillars: He set mountains on the earth lest it should shake with you: and scattered through it all kinds of animals. We send down rain from the sky with which we grow every type of noble species in pairs.

The description continues further: He is the One Who has made the earth a cradle for you, traced the roads on it for you to walk on: and sends down from the sky with which we produce pairs of various kinds of vegetation. [Surah Ta-Ha: 53]

Role of Plants for Sustaining Life on Earth

The “diverse plants” referred to in the above verses include the singled-celled (algae) as well as the multi-cellular plants. Some of them float on water and others are deep rooted. Plants occupy different niches (in the biosphere) both on land and in water.  The single-celled plants (algae) are found in both saline and in fresh waters.  They, along with the terrestrial plants manufacture their food (starch) in their ‘leaves’, in the presence of sunlight, through a process called photosynthesis.

A by-product of this process is oxygen, which is released eventually into the atmosphere.   The manufactured starch is utilised for their growth and to maintain their body structure and function.  The stored food products are a source of nutrition for other creatures.   Life on earth depends on the availability of oxygen, although some bacteria do survive in the absence of oxygen.   Algae have been scientifically recognised as the major source of oxygen to the biosphere.   During respiration the biota utilises oxygen and releases carbon dioxide which in turn is utilised by plants for photosynthesis.  These processes continue to maintain a balance between oxygen and carbon dioxide in the biosphere.

An Attentiveness and Concern for His Creation

In the Holy Quran, Allah (swt) mentions water or waters 178 times, wind or winds 65 times, cloud 49 times, storm three times, plants eight times, river or rivers 117 times, earth 824 times, sea 88 times, the sun 93 times, and the moon 59 times.  They are all mentioned in different contexts and situations associated with the life on earth.

The Role of Clouds in the Transport of Water

Scientific knowledge states that the earth’s water resources include fresh waters in lakes, streams, rivers; saline waters in the oceans; the ice and snow of the polar region and mountain glaciers; underground water; and the water contained in the biota. Freshwater (non-saline) is less than 3% including the freshwater in the form of ice in the polar region, and the remaining 97% is saline water.   Only 0.003% of total freshwater is available for human use, and the rest would require great expense for it to be made available. Globally the total rain-fall almost remains the same in spite of the temporal and spatial variations.

Winds as Heralds of Glad Tidings

Winds play a prominent role in the transport of cloud-water (rain).   It is Allah (swt) . . . who sends the winds as heralds of glad tidings, going before His mercy, and we send down pure water from the sky. [Surah Furqan: 48].   In Surah Ar-Rum:48, He says: . . . it is Allah who sends the winds, and they raise the clouds: then does he spread them in the sky as he wills, and break them into fragments, until thou seest rain-drops issue from the midst thereof: then when he has made them reach such of his servants as he wills, behold, they do rejoice!

Rightful Owner of All Natural Resources

Allah (swt) also wants to make it clear that He is the owner of the resources, and to him belong all things.  He continues: We send the winds fertilizing (to fill heavily the clouds with water), then cause the water to descend from the sky, and we give it to you to drink, and it is not you who hold the storage of this wealth (water). [Surah Al-Hijr: 22]

As science interprets, the words “winds fertilising” could also refer to the air-borne dust particle or bacteria around which the water is collected to form the rain drops.   These droplets grow larger until they become rain.  These particles can be soil particles or bacteria in the air. During periods of drought, water authorities in various parts of the world have utilised silver iodide or dry ice (solid form of carbon dioxide) to artificially seed clouds to enhance precipitation in the form of rain and snow.  The verse also categorically states that it is Allah (swt) who controls even the storage and supply of water.

He Piles Them in Masses

The clouds as a source of replenishment of water on earth have been described in 49 different places in the Holy Quran.    As Allah(swt) reveals: Do you not see that Allah makes the clouds move gently, then join them together, and then piles them up in masses, then you see the rain coming inside them? He also sends down hail from the clouds that look like mountains in the sky, afflicting there with whom He wills and turning away from whom He pleases; The flash of His lightning almost takes away sight. [Surah An-Nur: 43]

Similar revelations are also made in Surah Al-Baqarah: 164.  The formation of the cloud and the hail has been explained scientifically as follows:  As the small clouds come together the updrafts within the larger clouds increase.  These updrafts cause the cloud body to grow vertically into cooler regions of the atmosphere, where drops of water and hail are formed and they begin to grow larger and larger.   When the drops of water and hail become too heavy for the updraft to support them, they begin to fall from the cloud as rain and hail.

The above verse also talks about “lightning” in reference to hail storms.  The clouds, meteorologically speaking, become electrically charged as hail falls through the region of super-cooled droplets and ice crystals in the cloud.  When the hailstones or clouds get electrically charged, the lighter, positively charged particles are carried to the upper part of the cloud by updrafts. The hail, negatively charged, falls towards the bottom of the cloud, making it negatively charged.   When the negative charged hail comes across the positively charges particles, lightning and thunder occur. The scientific explanation is in concurrence with the Quranic revelation.

As cited earlier, every living being is created from water, whether it is the single-celled bacteria or the specialised and highly organised human being.  Allah (swt) then describes the types of animals as the ones that creep on their bellies (like snakes and worms) or walk on two legs like humans or four legged like most other animals.  This has been eloquently described in Surah An-Nur:45: Allah has created from water: every living creature of them there are some that creep on their bellies, some walk on two legs and yet, some that walk on four; Allah creates what He pleases; surely, Allah has power over everything.

Regarding providing sustenance to mankind, Allah (swt) says, Indeed, We have honoured the children of Adam, blessed them with good and pure things, and exalted them above many of our creatures [Surah Al-Isra: 70], and . . . He sends down water (rain) from the sky, with which He brings forth fruits for your sustenance . . . [Surah Ibrahim: 32]

As explained in the earlier verses, Allah created all species in pairs and the reproduction among them is by and large through the sexual processes involving the male and the female, however, among the “primitive” plants (algae) and animals such as crustacea and protozoa, a process called “parthenogenesis” (by a single female parent alone) also exists through the asexual means, wherein the female produces without the participation of a male.

As creator and sustainer, Allah (swt) is the one who provides the sustenance; There is no moving creature on Earth whose sustenance is not provided by Allah [Surah Hud:6], and in Surah Al-Hijr:20, Allah (swt) continues: . . . we provided therein means of sustenance for you and many other creatures to whom you do not provide.

He further enunciates, Let man reflect on the food he eats.  We pour down rainwater in abundance and cleave the soil asunder.  We bring forth grain, grapes, and nutritious vegetation, olives and dates, lush gardens, fruits, and fodder as a means of sustenance for you and your cattle [Surah ‘Abasa: 24-32] . . . and grains with husk and scented herbs [Surah Ar-Rahman: 12] as additional nutriments.

He reiterates in Surah Al-Mu’min: 79-80: It is Allah who provided you with cattle that you may use for riding and some for food: and there are also other advantages in them for you; they take you where you wish to go, carry you on their back as ships carry you by the sea.

Other benefits derived from cattle are described in Surah An–Nahl: 5: He created cattle, which provide you clothing, numerous benefits, and some of them you eat,  and it continues in verse 66 of the same Surah: Surely, there is a lesson for you in cattle. We give you to drink of what is in their bellies, between bowls and blood-pure milk- pleasant for those who drink.