The Bible Versus The Quran 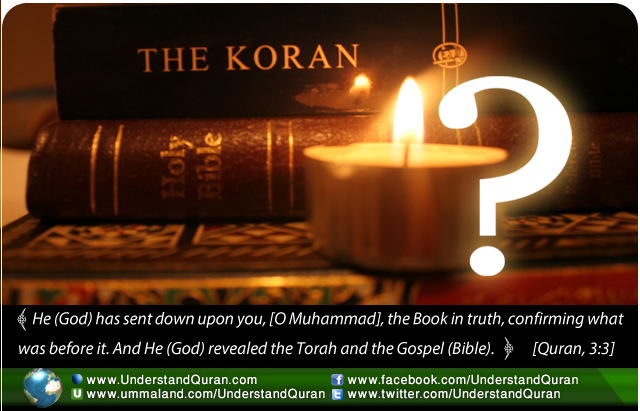 Have you ever watched a simple conversation about religious  differences turn into a heated debate about who is right and who is wrong? Sometimes it can be hard to remember that there are many reasons why people choose their religious paths, or, alhamdulillah, why Allah (swt) has chosen us to become followers of Islam.

I recently had the pleasure of having a few constructive conversations with a Christian about the similarities and differences in our religions. Being a revert, I have often answered questions about why I chose Islam or about some of the different aspects of Allah’s (swt) religion (for example, why we pray five times a day, why we don’t eat pork, and what fasting is all about), but never before was I questioned in depth about my belief and challenged as to why and how Islam is the true religion.

Not So Different After All

There were three main points that we differed on, and with a little research, I was able to find that some of the differences aren’t really so different after all when comparing the Bible and Quran.

There are many Christians who believe that Jesus is the son of God, and also that Jesus is a manifestation of God, who came to earth to cleanse men of their sins. Unfortunately, this belief comes from generations of misinterpreted teachings.

In the Bible it is written in many places that Jesus, peace be upon him, himself pleads with the people to only worship God, and that God is the one to whom we will return.

Jesus said, “Do not hold on to me, for I have not yet ascended to the Father. Go instead to my brothers and tell them,  ‘I am ascending to my Father and your Father, to my God and your God.'” [John 20:17]

As believers in Allah (swt), we know that Jesus is the son of Mary, peace and blessings be upon them both. Jesus was a man who, by the power and will of almighty Allah (swt), was able to perform miracles. As in the Bible, Jesus also mentions in the Quran that he would dare not lead the people astray and command them to worship him.

And [beware the Day] when Allah will say, “O Jesus, Son of Mary, did you say to the people, ‘Take me and my mother as deities besides Allah ?'” He will say, “Exalted are You! It was not for me to say that to which I have no right. If I had said it, You would have known it. You know what is within myself, and I do not know what is within Yourself. Indeed, it is You who is Knower of the unseen. [Quran, 5:116]

The perspective on eating pork also brought discussion, and the defense was that if God created it, He would want for us to eat it. Looking into this, I found that the Bible does not condone the eating of pork.

I spread out my hands all the day to a rebellious people, who walk in a way that is not good, following their own devices; a people who provoke me to my face continually, sacrificing in gardens and making offerings on bricks; who sit in tombs, and spend the night in secret places; who eat pig’s flesh, and broth of tainted meat is in their vessels. [Isaiah 65:2-4]

Allah (swt) warns us of the uncleanness of the flesh of swine, and even forbids the consumption unless it be dire to sustain life, just as the Bible comparably mentions swine as being impure and unclean, a sign of a rebellious people.

Say, “I do not find within that which was revealed to me [anything] forbidden to one who would eat it unless it be a dead animal or blood spilled out or the flesh of swine – for indeed, it is impure . . .” [Quran, 6:145]

3. Who is Muhammad (saw) and how do you know he did not make up the Quran?

Many Christians believe that Jesus was the final prophet, since Muhammad was not directly mentioned by name in the Bible. There are however, clear proofs in the Bible that there would be another prophet following Jesus who would bring Allah’s (swt) last and final message.

I will raise them up a Prophet from among their brethren, like unto thee, and will put my words in his mouth; and he shall speak unto them all that I shall command him. [Deuteronomy, 18:18]

Subhan allah! Only Allah (swt) could have known that, even before he knew himself, the Prophet Muhammad (saw) (despite his inability to read and write) would deliver His final and most important message in truth and purity. How is it that before the Quran was written and before the Prophet Muhammad’s time that mention of our beloved Prophet (saw) appeared in Allah’s other sacred books?

He (God) has sent down upon you, [O Muhammad], the Book in truth, confirming what was before it. And He (God) revealed the Torah and the Gospel (Bible). [Qura,n 3:3]

With just a little patience, understanding, and reading we can see that Allah (swt) is the mastermind, and it is humankind who has gone seriously astray. There is hope, inshaa Allah, that those who are misguided will find truth as Allah (swt) encompasses all into His mercy who seek it.

Indeed, those who believed and those who were Jews or Christians or Sabeans [before Prophet Muhammad] – those who believed in Allah and the Last Day and did righteousness – will have their reward with their Lord, and no fear will there be concerning them, nor will they grieve. [Quran, 2:62]

What I learned from this experience is that at times it is necessary to step out of our comfort zones by reading an unfamiliar scripture and understanding, finding translations, and finding the best way to convey the message while being patient and unwavering in our faith.

Allah (swt) is always testing us. He is the Hearer, Seer, and Knower of all things. So when it comes time for us to spread truth, let us do so with patience and kindness so that others can learn and fulfill their curiosities, and inshaa Allah perhaps you will be the cause of someone turning to Allah (swt) and accepting Islam, masha Allah!

But teach (thy Message) for teaching benefits the Believers. [Quran, 51:55]

Praying you will benefit.