The Bearers of the Throne 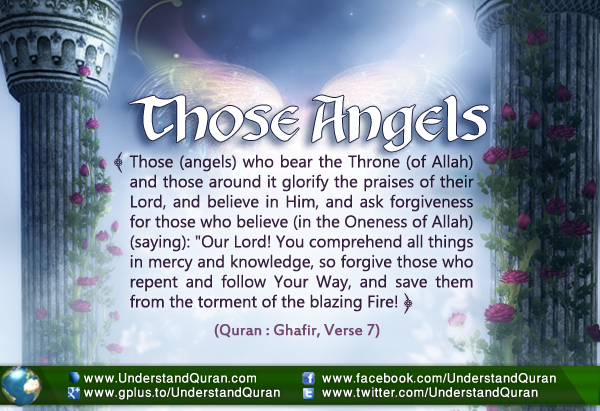 They have a very close relationship with you and are with you from the very beginning until the end of your life and beyond. Some spend their whole existence in ruku’, and when judgement is called they raise their heads and say:
Glory be to You, our Lord, we did not worship You in a way befitting Your Majesty [Muhammad Alshareef].
Believing in them is one of the pillars of emaan. And they make the most amazing dua’ for you.

Once Jibreel ‘alayhi sallam came to the Prophet salallaahu ‘alayhi wa sallam and asked him about Islam, eman, and ihsan.

Rasulullah salallaahu ‘alayhi wa sallam said, Eman is to believe in Allah, in His angels, His books, His Messengers, the Last Day, and the divine decree– the good and the bad thereof. This week we learn how our belief in the angels can make us more productive inshaAllah!

Three Reasons Why It’s Important to Talk About the Angels:

Be Motivated by the Recording Angels!

The closest angels to you are those on your shoulders, the ones responsible for recording all your deeds, good and bad. These are the “honourable scribes” (kiraaman kaatibeen). Allah ‘azza wajal says: But verily, over you (are appointed angels in charge of mankind) to watch you, Kiraaman (honourable) kaatibeen— writing down (your deeds). [al-Infitaar 82:10-11]

Productivity tip: Imagine you had a tape recorder on both shoulders and every time you glorified Allah you would get one dollar and each time you spoke evil you would be lashed. Imagine winning 30,000 dollars at the end of the day! The angels are recording everything you say, do, intend, or cause (good and bad), and the stakes are much, much higher with Allah!

Extra tip: Evaluate your deeds within short intervals!
When you do a bad deed, the angel in charge (ameer) of the recording angels tells the angel on the left, “Wait, don’t write it down— he or she might repent.” A hadeeth mentions that we are given six hours (periods of time) to make tawbah, and if we do repent in those six hours, the sin is not even written down!

Show Off to the Angels

How many times did you want to show off to someone you respect— to your father, mother, husband, wife, or friends? Show off to the angels and make them send nothing but the best report to your Lord!
Angels take turns around you, some at night and some by day, and all of them assemble together at the time of the Fajr and Asr prayers. Then those who have stayed with you throughout the night ascend to Allah, Who asks them, and He knows the answer better than they about you, ‘How have you left My servants?’ They reply, ‘As we have found them praying, we have left them praying.’ [Al-Bukharee]

Who of Mankind Loves You the Most?

At this moment, angels are with us, looking, listening, and writing. A question for you: Who from the people around you loves you the most? And if they really love you, what do they do? They make duaa’ for you! Can you believe that the greatest of Angels make duaa’ for you? An amazing duaa’ which even your father, mother, or most beloved person is not even making for you.

The huge, honorable angels, selected for the duty for nothing less than to carry the throne of The Allmighty, make this amazing duaa’ for the believers. An ultimate duaa’ for your productivity. Strive and make sure you are one of them.

SubhanAllah, look how they start their duaa’:  Our Lord! You comprehend all things in mercy and knowledge. We can learn from this while making duaa’!

Some Practical Tips on How You Can Make the Beautiful Angels Make Duaa’ For You!

1. Make dua for others.
The Prophet sallallahu alaihi wa-sallam said, The Dua of a person for his Muslim brother in his absence will be answered. At his head there is an angel, and every time he prays for him for something good, the angel who has been appointed to be with him, says, ‘Ameen, may you have likewise.’ [Muslim] Qadhi Ayaz (rahimahullah) relates, If the Salaf wanted to beseech Allah for something with regards to oneself, then they would supplicate to Allah with the same on behalf of their Muslim brethren because such a supplicate is accepted and the Angel supplicates for the supplicant.

4. Spend for a good cause.
The Prophet sallallahu alaihi wa-sallam said, Every day two angels descend from heaven and one of them says, ‘O Allah! Compensate every person who spends in Your Cause,’ and the other (angel) says, ‘O Allah! Destroy every miser.’ [Saheeh Bukharee] Remember, this is not just money, but any good deed with your body, soul, wealth, or time!

5. Visit your ill brothers or sisters.
The Prophet sallallahu alaihi wa-sallam said, There is no man who visits a sick person in the evening, but seventy thousand angels go out with him, and pray for his forgiveness until the morning, and he will have provision in Paradise. And whoever goes to him in the morning, seventy thousand Angels go with him, and they pray for forgiveness for him until the evening, and he will have provision in Paradise. [Saheeh Sunan Abi Dawood]

What is Our Duty to the Angels?

It is to believe in them and respect them in the manner they deserve. SubhanAllaah, think about this: when you’re committing a sin, these beautiful, noble angels feel ashamed writing them down.

May Allah ‘azza wajal make us of those who remember Him often and of those who reflect on the creation of the Angels while being patient, thankful, and hard-working to benefit from their beautiful service! Ameen.