How to Avoid Backbiting 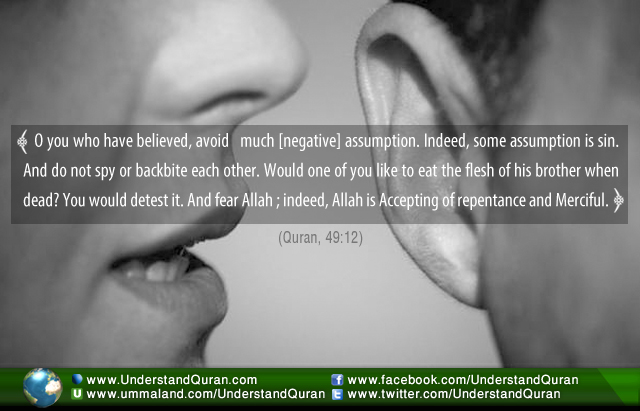 So often when we indulge in a conversation we somehow end up talking about someone not present among us. It’s almost unavoidable as conversations become less interesting without backbiting! It’s a term that makes us shudder, but sadly it’s a common occurrence when we fail to realize its effects.

Allah (swt) says: O you who have believed, avoid much [negative] assumption. Indeed, some assumption is sin. And do not spy or backbite each other. Would one of you like to eat the flesh of his brother when dead? You would detest it. And fear Allah; indeed, Allah is Accepting of repentance and Merciful. [Quran, 49:12]

Through this verse, we can understand the severity of the sin of backbiting. Would any one of us like to eat the flesh of a human being? Allah is saying that backbiting is equal to cannibalism.

Why? Because backbiting can cause very bad effects on an individual, family, and even on a society. Sometimes it can lead to crime. That’s why Allah has requested His servants to avoid backbiting by giving an example that is clear enough to help us understand its effects upon mankind.

‘Do you know what is backbiting?’ They (the Companions) said: ‘Allah and His Messenger (SAWS) know best. Thereupon he (the Prophet (SAWS)) said: ‘Backbiting implies your talking about your brother (behind his back) in a manner which he does not like.’ It was said to him: ‘What is your opinion about this that if I actually find (that failing) in my brother which I made a mention of?’ He (SAWS) said: ‘If (that failing) is actually found (in him) what you assert, you in fact backbited him, and if that is not in him it is a slander!’ [Muslim]

Before knowing how to avoid it, it’s important to know why it happens. So first of all, let’s look at the five most common reasons for backbiting:

This is the main reason why people talk about others in their absence. Jealousy means envying someone’s achievements and good. So those who are jealous of someone will automatically start to find fault and convey those faults to others.

If someone has wronged us, instead of forgiving and forgetting we talk about all the ills of that particular one who has annoyed us. It feels like a kind of gratification, and we fail to see the darkness clouding our hearts.

Some people like to talk about the defects of someone in their absence to make others laugh. They find this very interesting because the more they talk, the more people laugh.

There are people who simply find pleasure in discussing about the faults of others. This is mostly done by people who have plenty of time to waste. This is way too dangerous because they don’t know what they’re talking about and the effects that their words can bring upon them.

People those who are influenced by egotism which means that they are excessively conceited about themselves will always find time to degrade others those who are around them. They will be much satisfied to talk in their absence hoping that it would create a negative impression in people to whom they talk. This is very unfair and unfaithful at the same time.

How Can We Stop?

Whenever you’re communicating with someone, remember that Allah is watching you. Remember what He said in Quran about backbiting. Even if someone starts, you should hesitate to go along with them, fearing that you will gain Allah’s wrath because of your unnecessary involvement. You should also remind yourself that backbiting will not only pull you away from Allah’s Mercy, it will also get you closer to the trap of Shaitan.

What will happen if death strikes at a time when we’re deeply in a conversation backbiting someone? Does anyone want to meet such an end? So think about this whenever you are in a conversation. Insha’Allah, this will definitely help you to refrain from backbiting.

We’ve always heard it said: “Don’t make excuses!” But when you find yourself in a group of backbiters, simply make a polite excuse because you are not talking to an individual, but a group, which can create more conflicts. There’s no need to say much; only a few words will suffice, like: “I am sorry, I have to go.” This will make them realize that you are not interested in such conversations and soon they will come to know what they are doing.

If you happen to have such a conversation with an individual, tell them that you have nothing to do with this and it’s useless because it could not make an impact with the person whom we are talking about. And make them realize the bad effects that would bring both in this world and in the hereafter. This is the best way to teach others and if you are bold enough to express this among a group of people who are backbiting, then go ahead and make them realize too.

5. Put Yourself in His or Her Shoes

At certain instances, backbiting may interest you when talking to someone. In this situation, think about yourself. How would you feel if someone were backbiting you in the same way? Reminding yourself of this will not only help you to avoid backbiting but will also make you more humble and generous.

This is the best way to refrain from backbiting and it will be more effective when you are among a group. You can repel them by describing the good qualities of the person whom they are criticizing. This will most probably make them feel guilty. And if you are tempted to backbite someone, think about the good qualities they have. This will put an end to your evil thoughts.

We are familiar with the saying, “Silence is golden.” But have you ever thought about why? Because it will let all of us refrain from speaking evil, which is the best way to keep our hearts pure.

Even Rasoolullah said to utter good words or to be silent, but is silence enough? Some people nod on everything, whether good or bad. They simply keep nodding, thinking that it won’t be a sin. But remember, even a slight gesture which is shown to favour the backbiting is also included in the same category.

8. No One is Perfect

Before backbiting, make sure that you are 100% perfect. If not, take a pen, no matter wherever you are, and list 10 of your defects. Look at your list and think of a way to rectify them. This will eventually stop you from backbiting.

Whenever you hear about someone’s faults, feel sorry for them. Ask Allah to give them hidayat and thank Him for keeping you away from such mistakes. This will surely lessen the evil thoughts which pave the way for backbiting.

It’s not an unusual thing to hear about places that specialize in backbiting. If you know such places or if you happened to come across them, don’t go. Avoid them as much as you can because environment can really make an impact on us.

Yes. In any of the following situations, it is permissible to talk about someone’s defects in their absence:

If you want to get information from a scholar regarding a person’s matter to give him advice, then you can tell about him without mentioning his name.

If a person has caused injustice to you, then you can complain about the person to someone in order to reclaim your rights.

If you see a person committing sin, then you can tell it to someone with the intention to stop him from committing that particular sin.

So as to identify a person, you can tell about him to someone.

It is permissible to warn about someone who is bringing a bad effect to society, for example a thief.

Now we know what backbiting is and how evil it is to backbite someone. So let’s avoid it and try to correct ourselves first so that we can inspire others too, insha’Allah.

When I was taken up to heaven I passed by people who had nails of copper and were scratching their faces and their breasts. I asked: ‘Who are these people, O Jibrael?’ He replied: ‘They are those who were given to backbiting and who aspersed people’s honour.’ [Abu Dawood]